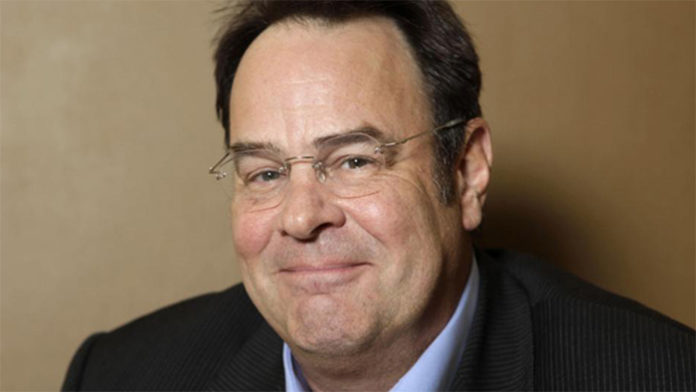 Canadian actor Dan Aykroyd first rose to fame as a cast member on Saturday Night Live in the latter half of the 70’s. Known for his distinctly different coloured eyes, the performer actually had his eyes set on becoming a priest growing upーit wasn’t until he was seventeen that he took the plunge into acting, appearing in a short-lived sketch comedy series called The Hart and Lorne Terrific Hour (1970). As he explored the possibility of working in the entertainment industry, he continued to hone his comedic acts through performances at various local nightclubs. Eventually dropping out of university, Aykroyd began performing with the Second City comedy troupe in Chicago and Toronto in 1973ーduring which, he had the chance to work with a number of other rising stars such as Gilda Radner, Bill Murray and John Candy. After appearing briefly in a Canadian series called Coming Up Rosie (1975), the aspiring comedian received an opportunity of a lifetime when he joined the regular cast of the late-night comedy, Saturday Night Live (1975).

Despite being the youngest member on the show, his skilled impersonations and delightful humour quickly captured the hearts of audience members. Alongside his co-star John Belushi, the duo eventually formed a musical act which they termed as The Blue Brothers. Applauded by those lucky enough to see their performances, they later embarked on a tour and even released three albums together. Throughout his years on Saturday Night Live, the comedian has been nominated for five Primetime Emmy Awardsーamongst which was a winーand a TV Land Award. Since then, he has starred in multiple films including Trading Places (1983), Ghostbusters (1984), Spies Like Us (1985), and Driving Miss Daisy (1989)ーthe last of which garnered him an Academy Award nomination for “Best Actor in a Supporting Role” in 1990. Since the start of his career, Aykroyd has appeared in well over a hundred different roles in front of the camera.

Versatile and well-rounded, Aykroyd is also the co-founder of House of Bluesーa chain of live music concert halls that promotes folk art and blues music. Originally started off as a group effort by several Hollywood artists, it began as a single establishment in Cambridge, Massachusetts but has since grown to encompass over twenty two theatres across Canada and the United States. Speaking of which, he is also the co-founder of Crystal Head Vodkaーa high-end vodka brand that he shares ownership with American artist, John Alexander. A wine connoisseur, he also co-owns a handful of wineries in the United States and Canada.

So what has the comedian/actor/entrepreneur been up to nowadays? What new endeavours have he taken on as of late? What happened to Dan Aykroyd? Where is he now in 2018? 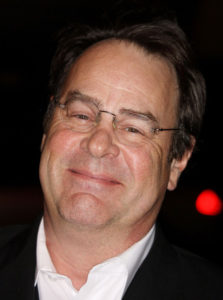 Born on July 1, 1952, in Ontario, Canada, Dan Aykroyd (Birth Name: Daniel Edward Aykroyd) is the son of Lorraine Helene Gougeon and Samuel Cuthbert Aykroyd, a secretary and a civil engineer. The oldest out of two children, he has a younger brother named Peter who is also an actor; he is of French, Dutch, Scottish, English and Irish descent. Aside from being born with heterochromiaーa condition marked by an individual having two differently coloured irisesーAykroyd also has webbed toes, a trait that was first revealed when he appeared in the comedy, Mr. Mike’s Mondo Video (1979).

Raised in a Catholic household, his early ambitions growing up was to become a priest. As a teen and student, he went to St. Patrick’s High School in his hometown of Ottawa, from which he later graduated in 1969. Following his graduation, he enrolled at Ottawa’s Carleton University where he studied criminal sociology and political sciencesーtwo focuses that fascinated him greatly. During his time there, he was also a member of the Sock and Buskin Drama Club, a local theatre company located in his university. Prior to attaining his bachelor’s degree however, he dropped out in order to pursue a career in comedy.

Shortly afterwards, he began performing stand-up at several local nightclubs; he also ran Club 505ーan after-hours speakeasy, for a number of years in his native province of Toronto. An experienced comedian, Aykroyd had appeared in a short-lived Canadian sketch comedy called The Hart and Lorne Terrific Hour (1970) at the age of seventeen. After a few years of delighting audiences at clubs with his humour, he became a member of the Second City comedy troupe in 1973, with whom he performed with in Chicago and Toronto. Five years after he made the decision to drop out of university, the aspiring comedian received a big break when he secured a role in the American sketch comedy series, Saturday Night Live at the age of twenty three. Although he was originally hired as one of the show’s writers, he later became a member of the cast prior to its premiere on television. 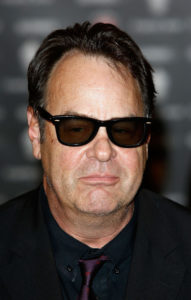 Given a huge opportunity to showcase his talents in the late-night sketch comedy, Aykroyd wasted no time in dazzling audience members with his skillful impersonationsーespecially those of Vincent Price, Tom Synder, Jimmy Carter and Julia Childーand witty humour. The youngest cast member at the time, his comedic performances earned him much praise from critics and viewers alikeーin fact, it earned him a Primetime Emmy Award for “Outstanding Writing in a Comedy-Variety” in 1997, which he shared with his fellow writers on the show.

Throughout his four years on the show, Aykroyd developed a handful of original characters including an alien, whom he referred to as “Beldar”. Alongside fellow Saturday Night Live cast member Jane Curtain, he also hosted the series’ news programming segment. Towards the latter half of the 70’s, the comedian also developed a musical act with John Belushi, another co-star from the show, which they called The Blues Brother; in it, he played a harmonica-playing sidekick named Elwood Blues. Together, the duo eventually released three albums and even embarked on a tour in 1978.

After departing from Saturday Night Live in 1979, Aykroyd began involving himself in acting. Over the next few years, he appeared in a variety of movies including Mr. Mike’s Mondo Video (1979), 1941 (1979), and Neighbors (1981). However it was ultimately the 1983 comedy flick, Trading Places that garnered him much widespread attention as an actor. Written by Herschel Weingrod and Timothy Harris, it depicted the story of a homeless street hustler and a wealthy commodities broker whose lives cross paths after they are made part of an elaborate bet. Released theatrically in North America on June 10, 1983, it grossed over $7.3 million during its opening weekend across 1375 theatres. Well-received, Trading Places was praised by many criticsーsome of whom described it as one of the “most morally gratifying” and “most emotionally satisfying” comedies of all time.

Given a three and a half star rating by Chicago Sun-Times film critic Roger Ebert, it eventually went on to earn over $90 million at the box office. While Aykroyd played the part of Louis Winthorpe III, the upper-class commodities broker, fellow comedian and actor Eddie Murphie portrayed the role of the hustler, Billy Ray Valentine. 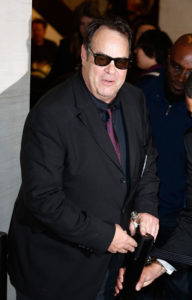 In 1989, he worked with director Bruce Beresford in the comedy film, Driving Miss Daisy. Starring Jessica Tandy, and Morgan Freeman (and Aykroyd, of course), it revolved around an elderly Jewish woman and her African-American chauffeurーthe two of whom grow to know each other better throughout the course of the movie. Opened in theatres on January 26, 1990, after a limited release in December 1989, it quickly proved to be a huge success, earning over $5 million in its opening weekend.

Universally acclaimed, Driving Miss Daisy received multiple praises for its impeccable performances and brilliant screenplay; it was even hailed as one of the best movies of 1989 by Chicago Tribune critic, Gene Siskel. A massive financial success, it eventually went on to gross over $145 million worldwide by the end of its theatrical runーwhich is close to twenty times that of its production budget of $7.5 million. For his portrayal of Boolie Werthan, the title character’s son, Aykroyd was nominated for an Academy Award for “Best Actor in a Supporting Role” in 1990.

Returning back to television, Akroyd hosted a Canadian science fiction drama series called Psi Factor: Chronicles of the Paranormal, that premiered in Syndication in the fall of 1996. Created in part by the actor with the help of Christopher Chacon, the show centred around a group of scientific researchers who investigate various paranormal phenomenons. Although it was a work of fiction, many viewers at the time were driven to believe the legitimacy of what was shown in the series; for this reason, the series was generally looked down upon by the Committee for Skeptical Inquiry. Aside from Akroyd, who served as the host, Psi Factor: Chronicles of the Paranormal also featured Paul Miller, Nancy Anne Sakovich, Barclay Hope, Colin Fox and Maurice Dean Wint in its main cast. Generally well received despite the mild controversy that it sparked, it ultimately continued for four years, spanning nearly ninety episode by the end of its run on May 20, 2000.

In the spring of 1997, Akroyd took his comedic talents to the ABC sitcom, Soul Man, where he starred alongside Anthony Clark, Kevin Sherdi, Spencer Berslin and Brendon Ryan Barret. Created by Matt Williams, David McFadzean and Carmen Finestra, it followed the life of Mike Weber (played by Akroyd)ーa widowed priest who must juggle his time between his obstreperous parishioners and four children. Upon its premiere on April 15, 1997, it was met with generally favourable reviews; for instance, it ranked 29th during its second and final season. Despite the positive attention that it garnered however, Soul Man ultimately proved to be short-lived; it came to an end in May 1998 after only two seasons. Nonetheless, it received a BMI TV Music Award and three Young Artist Award nominations in 1998.

The performer has been quite busy working on a string of documentaries this year, one of which includes the upcoming Cleanin’ Up the Town: Remembered Ghostbusters (2017). Written and directed by Anthony Bueno, the film will chronicle the Ghostbusters franchise from past to present. Besides Akyroyd, Sigourney Weaver, Ernie Hudson, Harold Ramis, Annie Potts and Jennifer Runyon, amongst many other actors, will also be making appearances in the video.

In other news, it’s reported that Akroyd is currently looking to expand the main wine production site for his wineries. According to reports, the company will be selling up to $8.8 million of its shares in order to make the the expansion possible. Amongst the brands that it distributes is France’s Fat Bastard Wines, Iceberg vodka, Brick Brewing Beers, Argentina’s Kaiken wines, and many others.

If you’d like to stay up-to-date and connected with the star, you can do so by following him on social media at @dan_aykroyd.