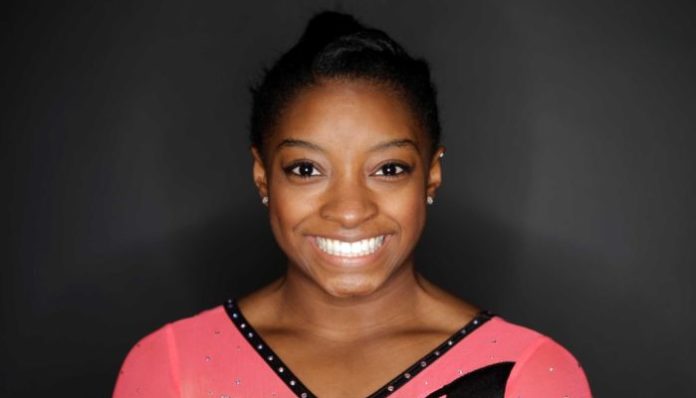 Simone Arianne Biles is known as one of the most decorated American gymnasts you can meet today. At only 19 years old, she has won an impressive set of Olympic gold medals for her unrivaled performance in the art of gymnastics.  Needless to say, this has earned her a significant fortune along the way.

How did Simone Biles make her money & wealth?

Looking at Simone’s childhood, it is easy to understand why she calls it a difficult one. Her mother, Shanon, had struggled with a drug and alcohol addiction when her four children were still young and was left unable to fully take care of them. As a result, Simone and her three siblings constantly moved in and out of their foster care homes. Their father was no different, Kelvin Clemons left when his children were still young after having similar problems to his wife. Simone’s grandfather, Ron, saw all this unfold and decided to step in and give his grandchildren the childhood they deserved.

Ron officially adopted Simone and her sister, Adria, after three years of temporary care. Ron’s sister adopted the two older siblings. Simone’s grandfather was a respectable individual with high standards that were far from those of his daughter’s. Ron served in the US Air Force and Federal Aviation Administration as an air-traffic controller.

As a result of her significant involvement in her sporting career from a young age, Simone had to be home schooled through the course of her secondary education. After graduating in 2015, she announced on Twitter that she was going to attend UCLA. Her decision to turn professional in the same year forfeited her eligibility for NCAA, but this wasn’t a major issue given where her sporting career had taken her thus far.

Simone’s interest in gymnastics sparked from the young age of 6 when she tried it out during a field trip. It was recommended that she continued the sport and she began training with a personal coach two years later. Her career officially began in 2011 when she participated in the American Classic in Houston. She achieved high ratings all round in the tournament and later attended the U.S Classic in Chicago to further expand her portfolio. She continued to participate in numerous events around her home state throughout her junior career.

Simone made her international debut at the 2013 American Cup, where she was a replacement for Elizabeth prince, who withdrew due to injuries. She placed second behind her teammate – not a bad start for a young aspiring gymnast from Ohio. Immediately after that, she flew to Italy to compete in the City of Jesolo Trophy where she helped her team win gold in numerous disciplines including the balance beam, floor titles and vault. She went on to compete a large list of other events including the USA Gymnastics National Championships, the World Artistic Gymnastic Championships and many others, all in the same year.

Moving into 2014, Simone competed in at the USA Gymnastics National Championships, where she once again became a national-all-round champion, winning gold on the vault and floor, giving her a position in the Senior National Team for a second time. One of her standout events for the year was the 2014 World Artistic Gymnastics Championships in China, where she did exceptionally well in all her disciplines despite a few minor errors.

In the next two years, Simone competed in numerous international events, gaining her iconic status around the world. She became a role model for young athletes and she even had a parade set up for her when coming back to her home in Texas. She obtained numerous Olympic gold medals and a multitude of prestigious awards. The most noteworthy of which can be owed to the 2016 Olympic Games in Rio, where she obtained four gold medals and one bronze.

According to moneynation, the American athlete was worth around $60,000 in 2013 when she was moving into her senior career. This figure moved up to $300,000 in 2015 after her winning streak became more prevalent. In 2016, her net worth moved up to over $2 million before the Olympic games even started. Factoring in cash prizes and winnings over the past year, this figure moves to around $2.5 million, making Simone one wealthy teenager. 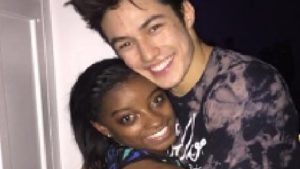 Considering her involvement in her career and the fact that Simone is only 19 years old, it goes without saying that time for significant others is very sparse. Up until now, Simone has not settled with anyone yet.  The only relationship that’s been making its way around the rumor mill, is that the gold medal gymnast, may have an off and on relationship with fellow gymnast, Arthur Nory Mariano, a Brazilian bronze medalist she met in 2013.

Her busy life has left her with little time for settling down in one single location. Simone current still resides in her grandparent’s Texas home, decking out her bedroom with purple accents and even a life-sized cut out of Zac Efron, who she claims is her celebrity crush. She says that she is happy with her current home and shares a close relationship with her sister, who is also an aspiring gymnast.

How much does Simone Biles make per event?

For most events, the American gymnast’s earnings are based on the medals she earns. Generally speaking, bronze medals go for around $10 000, silvers for $15 000 and gold medals fetch a cool $10 000 on top of that. Endorsements and sponsorships are sure to increase that figure to something much more significant, hence her multi-million dollar net worth.

Even at a young age, Simone has become accustomed to giving back to those in need. She participated in the Kids Wish network, where she granted a young girl, Melinda Ortega’s wish to attend the Kellogg Tour of Gymnastics Championships 2016 event in Philadelphia. The American gymnast went on to say how Melinda’s strength through the difficult time was an inspiration to her and the other gymnasts who met the young girl. 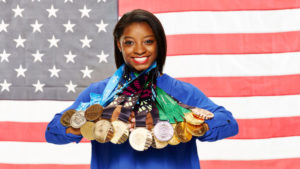 Apart from being one of the most successful US gymnasts of all time, Simone is one of only two African American female US gymnasts to win both the individual and team all-round gold at the same Olympic games. She was even chosen by her the US team to be the flag bearer for the Rio Olympic games, something very few people get to do. She also holds the record for most gold medals won in woman’s gymnastics at a single games. She was chosen by BBC as one of the Top 100 Women for 2016.