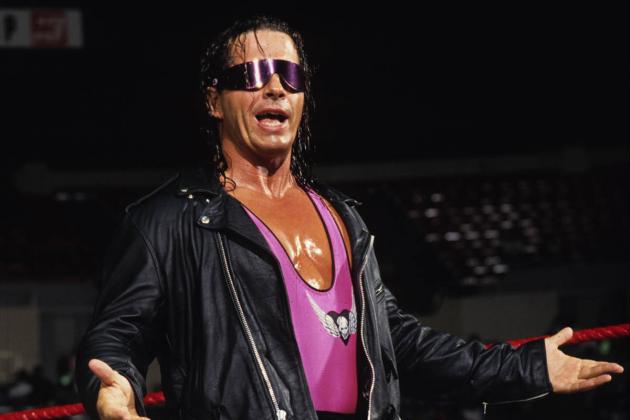 Bret “The Hitman” Hart, full name Bret Sergeant Hart, was born on July 2 in 1957. Bret Hart is widely known for his body of work as a professional wrestler, which came to an abrupt and unfortunate end. Bret Hart is a numerous-time champion under the WWE banner and currently works under a Legends contract, as well as hosting his own weekly podcast. Read on more to learn about Bret Hart, his time as a professional wrestler, and what he is doing in 2017 with himself.

As mentioned earlier, Bret Hart was born in 1957 to his two Canadian parents in Calgary, Alberta. He was actually born and destined to become a wrestler, as the Hart family is renowned for their wrestling talent. The Hart family was a bit odd and were definitely of the carnie nature, as his father had kept a bear chained in the basement in the mansion in which Bret Hart was raised. Bret Hart had eleven brothers and sisters, but was closest to his brother Dean. Bret Hart was subjected to wrestling at an early age due to his father training wrestlers in the infamous “Hart Family Dungeon,” which was their modified basement turned into a space to properly train and educate soon-to-be professional wrestlers. Bret also got into the business early, as he served as a staff member for professional wrestling shows and would even move onto selling programs that include information about the show.

Bret Hart was also an amateur wrestler, and won numerous championships held throughout the Alberta territory, including winning the 1974 championship tournament in his hometown of Calgary. He would go on to become a collegiate wrestler, wrestling for Mount Royal College (he studied filmmaking there), but was beginning to grow tired of amateur wrestling due to his sheer dominance, badly timed injuries, and the nature of having to lose and gain weight. At this point, he began to work for his father’s professional wrestling promotion based out of Calgary, Stampede Wrestling. A wrestler was not able to perform in his match, so Bret entered as a replacement and eventually became a regular performer. In 1984, Bret Hart would enter the WWE. 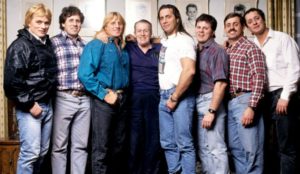 Bret Hart’s WWE/WCW Career and Beyond

Bret Hart’s career started out without much notice, but once he took on his “The Hitman” moniker, Bret quickly became popular. He entered into a team named “The Hart Foundation” with Jim Neidhart and his cousin Jimmy Hart, and Neidhart and Bret would go on to win several championships. Bret Hart’s image became iconic with his mirrored sunglasses, which he primarily wore to hide his nerves during promos that Bret would perform to be aired on television. He started his solo career with legend Ricky Steamboat, but would go on to win his first WWF Tag Team Championship with Jim Neidhart in February of 1987.

Bret and Jim Neidhart would hold the titles from February until October, and entering into 1988, became famous for his amazing matches that typically went more than 20 minutes. He would then enter into numerous WWE pay-per-views, including the Royal Rumble where Bret became a staple performer that entered year after year. Bret and Jim Neidhart would again win the WWF Tag Team Championship in 1990 and would hold the title for 5 more months, cementing two long reigns with The Hart Foundation.

Bret Hart won his first solo championship, the WWE Intercontinental Championship at the SummerSlam pay-per-view in August of 1991, then would go on to win the King of the Ring title that same year. He held the Intercontinental title for a full year, losing it at the SummerSlam pay-per-view in August of 1992, but would go on to win the WWF World Heavyweight Championship in his motherland in October of 1992. Bret Hart would go on to feud with Jerry “The King” Lawler, who is renowned for his body of announcing with the WWE; this feud would be an award winning feud for both men. Bret Hart held the WWF Championship for several months before losing it in March of 1994 at the WrestleMania event.

Bret Hart soon came to feud with legendary wrestler “Stone Cold” Steve Austin, and this feud even hosted the reunion for The Hart Foundation; Jim Neidhart and Jimmy Hart both returned to side with Bret for his feud with Steve Austin. The rivalry came to a head when Stone Cold and Bret Hart wrestled in a submission match, which ended with Bret Hart causing Steve Austin to pass out. The match received high praise, and that even included a 5-star rating from professional wrestling critic Dave Meltzer. 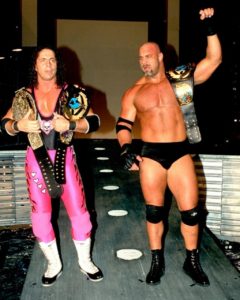 Bret Hart’s momentum slowed considerably until he entered into a feud with Shawn Michaels. During this feud, Shawn Michaels was rather unprofessional and was struggling with substance abuse at the time. This feud came to a head with “The Montreal Screwjob,” where Shawn Michaels put Bret Hart into his own submission move, The Sharpshooter, and while Bret Hart did not tap, WWE owner Vince McMahon called for the bell to be rung and the title awarded to Shawn Michaels. At the time, Bret Hart was potentially negotiating a 17-year long contract with Vince McMahon and also considering offers with competitor WCW; Bret was not willing to drop the title to Shawn Michaels and wanted to leave the WWE with the WWE’s championship, so Vince McMahon, Shawn Michaels, and a few other cronies (including Triple H) saw it fit to perform the screwjob.

Bret Hart signed with WCW in 1997 for 3 years with a salary of $2.5 million, which was more than a $1 million raise from his WWE contract. He also received several fringe benefits, including total creative control over his own television character. Bret Hart debuted on Monday Night Nitro in December of 1997, but was operating under a 60-day no compete clause, so he typically appeared in officiating roles and took a non-physical presence in storylines. He would feud with other wrestlers that would eventually go to the WWE, including “Macho Man” Randy Savage, Chris Benoit, and Lex Luger.

As Bret Hart entered the WCW, the Monday Night Wars, a ratings war between WWE and WCW, was in full effect – companies would poach other wrestlers from each other, but the WWE won the ratings in the end and caused WCW to close in 2001. Bret Hart won a few titles but did engage in any outstanding, memorable feuds in WCW until he entered a feud with Goldberg in 2000. The feud has been panned by Bret Hart; for an example, the storyline included Bret Hart wearing a chestplate that would protect him from Goldberg’s famous spear move and cause Goldberg to knock himself out. This all came to an end when Bret Hart suffered a career-ending concussion from a kick from Goldberg, and he soon announced his retirement from professional wrestling entirely. 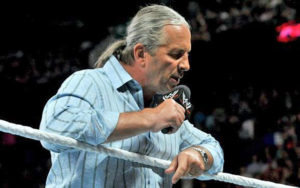 Bret Hart would come back into the professional wrestling world in 2006 to be induced into the WWE Hall of Fame by Steve Austin, but refused to appear the following night at Wrestlemania 22. He would then come back to the WWE to partake in a feud with Vince McMahon over the Montreal Screwjob in 1997, would receive his revenge by placing Vince McMahon in a Sharpshooter (even though that night of the screwjob, Vince McMahon did allow him a free shot and so Bret gave him a huge black eye) and eventually burying the hatchet and forgiving Vince McMahon for the screwjob. Since then, Bret Hart has occasionally appeared in the professional wrestling realm and has even made comments on the state of the WWE or commented on matches; the most recent example is when Seth Rollins injured all Finn Balor, John Cena and professional wrestling icon Sting all within a year of each other, Bret called Seth Rollins an “unsafe worker.”

Bret Hart has been active mostly on the internet since his departure from the professional wrestling world, but has started his own podcast, written several books and typically interacting with fans on social media. Bret Hart actually announced that he was receiving treatment for prostate cancer, attempting to desensitize the stigma surrounding the illness. Bret’s surgery was a success and he is currently being monitored every three months to stop the illness from returning. Bret Hart also served as inspiration for the professional hockey team, the Calgary Hitmen; since Bret Hart is one of the biggest icons from Calgary, he approved the team’s request to use The Hitman moniker. He is the founder and part-owner of the team.

Bret Hart starred in the documentary film, Nine Legends, released in 2016, which features interviews with 7 professional wrestlers, boker Mike Tyson and former-UFC fighter Randy Couture. Bret Hart also started his own podcast named “The Sharpshooter Show” in early 2016, which is a weekly podcast where Bret will discuss matters about professional wrestling or talk about his history. Bret Hart’s niece (and Jim Neidhart’s daughter – Neidhart and Hart are cousins), Natalie Neidhart (also known as Natalya) performs in the WWE currently. Natalya was trained by the Hart Foundation and remains true to her heritage, wearing the pink and gold color scheme that the Hart Foundation is famous for. Bret Hart married his current wife, Stephanie Washington, in 2010 and is a grandfather with two grandchildren and has four of his own children.