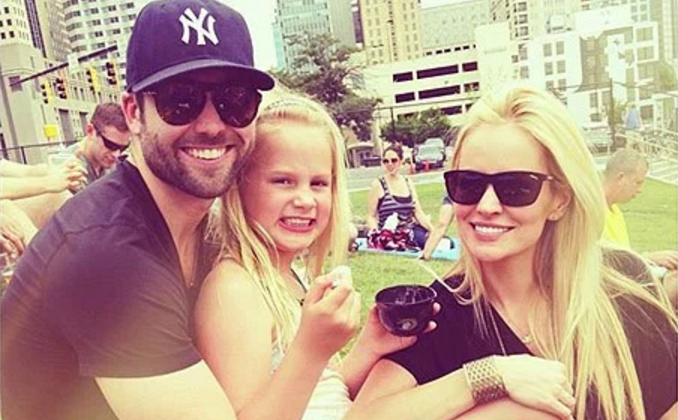 Emily Maynard stuck out when she first appeared on The Bachelor. She was one of the first contestants to have a child and the only one whose child had a tragic backstory. This put her at a bit of a disadvantage when she was vying for Brad Womack’s affection, but on her season of The Bachelorette, it meant she had all the advantage. Of course, not every engagement lasts, and a few months after the “After the Rose Special,” Emily and Jef canceled theirs. This has left lots of people wondering what she’s up to.

Emily Maynard on The Bachelor

Before her stint on The Bachelor, Emily Maynard was a bit of a name in tabloids. In 2004, when she was 18, her fiancée Ricky Hendrick died in a plane crash. Hendricks was a NASCAR driver in the Busch Series, most known for finishing in the Top Ten 19 times during a single season. As if that wasn’t tragic enough, a few weeks after his death, Emily learned she was pregnant. She gave birth on June 29, 2005, and named her daughter Josephine Riddick Hendrick. Emily calls her Ricki in memory of her deceased father.

Six years later, Emily Maynard was one of the contestants on Season 15 of The Bachelor, most notable for being the only season at that point to bring back a bachelor from an earlier season. Brad Womack was also known for being  one of those Bachelor’s that audiences loved to hate.In

In my article about him, I argued that perhaps some of the criticism against him was unfair. After all, just because he wasn’t as wealthy or educated as some of the previous contestants doesn’t mean he’s a bad guy, right? And someone the producers brought on for two seasons of The Bachelor can’t be too awful, right?

I’ve changed my mind, after going back and re-watching his second season.  While I won’t go as far as some other writers have, I’m willing to say that how he treated Emily Maynard was unfair. After a tumultuous season, he picked her as the winner and proposed to her. Then broke up with her. Then they got back together, and then he broke up with her again. In an interview, he said he “dodged a bullet,” by not marrying Emily. Harsh words, especially considering the “bullet” Womack was referring to was likely Emily’s daughter Ricki, who was six at the time.

Emily Maynard (& Ricki) on The Bachelorette

After it was clear Emily and Brad weren’t going to work out, Emily was chosen to be the star of the eighth season of The Bachelorette. From the beginning, it was clear the producers were going to take Emily’s needs as a mom into account.

The season was mostly filmed in Charlotte, North Carolina, where Emily and her daughter Ricki lived. Considerate, but also a hurdle for the producers. It became clear that they were struggling to find fun activities for Emily and her suitors to do. Climbing the side of a skyscraper during a lightning storm isn’t my idea of fun, but it didn’t make for bad TV. Even when they left Dixie, luck seemed against them. A trip to Bermuda was cold and rainy. A visit to Croatia was mostly focused around alluding to the Disney movie Brave, which was about to be released.

Ricki, Emily Maynard’s daughter, added to the difficulties… by not being difficult. Almost all of the contestants were emphatic about how much they loved kids. The two that were hesitant about Emily being a mom were sent home in the first few episodes and those that remained seemed almost over-eager to prove they loved kids. What could have been a point of contention throughout the season quickly took a backseat to the more traditional Bachelor drama.

One of the more notable things about Emily Maynard’s stint on The Bachelorette was how emotionally distant she seemed from her suitors. She was friendly, sure, but also guarded against letting anyone win her over too quickly. Maybe it was because she was a veteran of the show, or maybe it was because she’d lost her fiancee when she was young.

One of the contestants was also distant throughout the season: Jef Holm. By the end of this season, this distance brought the two closer together, and for their final date, Jef and Emily have a rather relaxed day. Jef meets Emily’s daughter Ricki, and by the end of it, Ricki seems incredibly comfortable around Jef. This is enough to help her make her decision, and she doesn’t even go on the final date with the other finalist, Arie Luyendyk.

At the final Rose Ceremony, Jef proposed to Emily, and she said yes. Ricki joins the couple and, all holding hands, they walk off the stage.

Emily Maynard After The Bachelorette

Emily Maynard’s “After the Final Rose” episode was the second to be done live, which definitely helped emphasize how awkward it was. Arie, the runner-up, revealed that he found it hard to accept being rejected. He apparently even flew out to Emily’s hometown to confront her but reconsidered at the last moment. Instead, he left his diary on her doorstep.

She didn’t read it, and instead, returned it to the broken-hearted Arie. After that embarassing exchange, Jef came onto the stage, and he and Emily were introduced publicly as an engaged couple. Jef said that he was beginning to form a friendship with Emily’s daughter Ricki, and the couple announced that they were going to travel to Africa to promote Jef’s company, People Water. Afterward, Jef planned on moving to Charlotte, so Ricki wouldn’t have to change schools or lose any friends.

Unfortunately, the couple announced they were breaking up just a few months later, in October 2012. After that, Emily Maynard pretty abruptly dropped from the public eye. She’d been the topic of tabloid gossip off and on for almost 8 years and probably wanted to give her daughter a break from the attention.

In January 2014, she announced she was engaged to an automotive consultant, Tyler Johnson. That June, they had a surprise ceremony on Johnson’s family farm in South Carolina. In an interview after their nuptials, Emily Maynard (now Emily Johnson) confided that she felt embarrassed and ashamed about having been on The Bachelor and The Bachelorette.

In October 2015, Emily and Tyler had their first kid together, a son they named Jennings Tyler Johnson. (Jennings was Emily’s grandfather’s name.) The following spring, Emily released a book, “I Said Yes,” where she shared her perspective on her relationships – from her early engagement to the late Ricky Hendricks, to her stint on the Bachelor, to the man who finally won her heart. That March, she announced she was pregnant again.

Emily Maynard gave birth to her fourth child, a son she named Gibson, in September 2016. Since then, she’s been pretty inactive online. Understandable, considering she has a teenage daughter, a toddler, and an infant.

Emily, to put it gently, took the long road to happiness. But if her book and blog are any indications she thinks the journey was more than worth it.