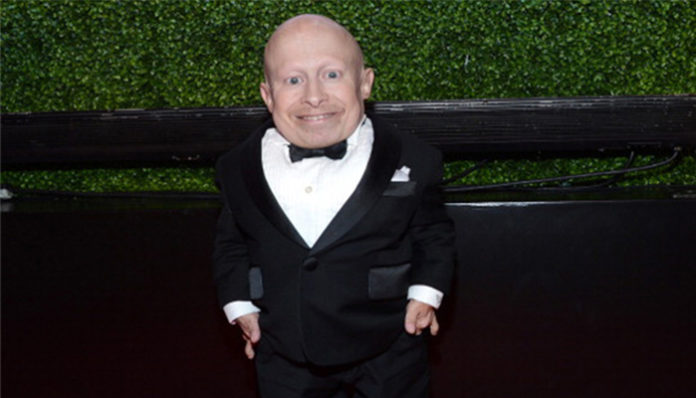 Standing a little under three feet tall, Verne Troyer is best known for his portrayal of Mini-Me in the Austin Power film series. Born with dwarfism, he is currently one of the shortest men in the world; however that hasn’t stopped him from making a name for himself in the show business. After graduating from high school in the late 80’s, Troyer discovered the art of performing. Relocating to Arlington, Texas, he eventually received his first break in 1993 when he was cast as a stunt double for a nine-month-old baby in the comedy film, Baby’s Day Out (1994). Continuing to audition for various roles, he later appeared as Pinocchio in the fantasy horror movie, Pinocchio’s Revenge (1996). Over the next couple of years, he continued to portray several rolesーmostly of children; for instance, he had a few appearances in Fear and Loathing in Las Vegas (1998), Mighty Joe Young (1998), Instinct (1999), and Shasta McNasty (1999). From there, Troyer soon landed his breakthrough in the action comedy, Austin Powers: The Spy Who Shagged Me (1999).

A huge hit at a blockbuster, the film starred Troyer as Mini-Meーa clone of the movie’s protagonist, Dr. Evil. Regarded as his breakthrough role, it garnered the actor much widespread attention, not to mention a handful of accolades including a Blockbuster Entertainment Award, and three MTV Movie Awardsーamong which was a win. Three years later, he reprised his role in the subsequent sequel, Austin Powers in Goldmember (2002). Aside from the comedy series, Troyer has also starred in Harry Potter and the Sorcerer’s Stone (2001), Hard Cash (2002), Pauly Shore Is Dead (2003), Postal (2007), The Love Guru (2008), and The Imaginarium of Doctor Parnassus (2009), to name a few. On top of that, he’s starred in several video shorts over the years including Mission: Imp (2000), The Wacky Adventures of Ronald McDonald (2003), Verne Troyer Sex Tape (2008), and Story Cops with Verne Troyer (2013).

Outside of the big screen, Troyer has also graced the screens with his presence in numerous TV shows. In 1998, he appeared on television for the first time in an episode of the fantasy series, Young Hercules. After a couple of minor roles, he landed a recurring role in the comedy, Jack of All Trades (2000), where he played as Napoleon Bonaparte. Some of the other shows which he’s been involved with include Freedom (2000), Sabrina The Teenage Witch (2002), Boston Public (2003), Scrubs (2003), Half & Half (2005), Lemon La Vida Loca (2013), and Where’s This Party (2014). Of course, Troyer has also gotten his fair share of on-screen time on reality TV on series such as Celebrity Big Brother (2009), The Xtra Factor (2012), Celebrity Wife Swap (2015), and Celebrity Juice (2015).

So what has he who is known for his distinctive height been up to recently? What new roles have he landed in the last few months? What happened to Verne Troyer? Where is he now in 2018? 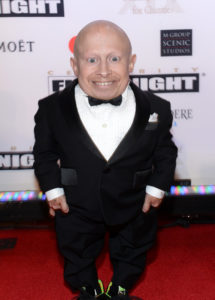 Born on January 1, 1969 in Sturgis, Michigan, Verne Troyer is the son of Reuben and Susan Troyer, a repair technician, and a factory worker; one of three children, he has two siblings named Deborah and Davon. When he was a baby, Troyer was diagnosed with hypoplasia dwarfism. Despite being significantly shorter than the rest of his peers, he never let his short stature get the best of him; in fact, he used it to his advantageーfor instance, hiding and surprising people from inside his locker in school. Raised Amish in Centreville, Michigan, Troyer stated in an interview that he was never treated any different compared to his average-sized siblings; he still had to feed the family’s farm animals and do his chores such as carrying wood.

In 1987, Troyer graduated from Centreville High School, after which he discovered the art of acting and performing. A few years later, he received a big break when he landed a gig working as a stunt double for a nine-month-old baby in the comedy film, Baby’s Day Out (1994); the experience ultimately also served as his motion picture debut. Continuing to play small roles over the next few years, he appeared in the movies Pinocchio’s Revenge (1996), Men in Black (1997), Wishmaster (1997), Fear and Loathing in Los Vegas (1998), and Mighty Joe Young (1998). In 1998, he also appeared on television for the first time in an episode of the fantasy series, Young Hercules. Several minor parts later, Troyer was given a huge opportunity when he was cast as a supporting character in the spy comedy film, Austin Powers: The Spy Who Shagged Me (1999). 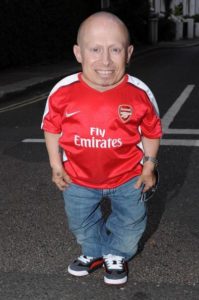 Preceded by the original 1997 film, Austin Powers: International Man of Mystery, the 1999 sequel centred around the movie’s protagonist, Dr. Evil as he travels back to the 60’s, after inventing a time machine, in attempts of stealing Austin Power’s mojo. While actor Mike Myers reprised his role as the title character, Troyer was cast as Mini-Meーa clone of Dr. Evil, whom his minions made for him.

Despite being “one eighth his original size”, Mini-Me is essentially identical to Dr. Evil except for one discerning differenceーhe seldom talks, except for the occasional evil laugh. A strong fighter in spite of his small size, he is often considered to be much more powerful compared to his full-size counterpart. Besides Troyer and Myers, Austin Powers: The Spy Who Shagged Me also starred Michael York, Rob Lowe, Mindy Sterling, Rob Lowe, and Seth Green.

Distributed by New Line Cinema, the spy comedy was released nationwide on June 11, 1999 after an initial premiere a few days earlier. Opening at the box office at number one, the movie was a huge hit; by the end of its opening weekend, it had grossed over $54 millionーwhich is already over that of its production budget of $33 million. After its time in theatres was over, the film had earned over a staggering amount of $312 million worldwide. Despite being a financial success however, Austin Powers: The Spy Who Shagged Me generally received mixed reviews; while some viewers praised it as being funnier than the original movie, others felt that the screenplay and script were riddled with flaws. Nonetheless, it offered Troyer a huge opportunity to sell himself as a talented actorーsomething that he hadn’t been given a chance to demonstrate previously, with the small roles that he’d been given. The Oscar-nominated film later earned him several accolades including three MTV Movie Award nominations, among which was a win, and a Blockbuster Entertainment Award for “Favourite Supporting Actor in a Comedy”.

Three years later, Troyer reprised his role as Mini-Me in the sequel, Austin Powers in Goldmember (2002). The final instalment of the film series, it featured a screenplay written by Michael McCullers and Mike Myersーthe latter of whom plays the title character. Noteworthy for being Beyonce’s film debut, it centred around Austin Powers as he tries to save his father after he is kidnapped from a villain named Goldmember in 1975.

Playing a slightly larger role in the film compared to the last, Mini-Me accomplishes several things such as instigating a prison riot, and infiltrating Dr. Evil’s sub. In a self-parody, a film called Austinpussy also shows within the film, which stars Tom Cruise, John Travolta, Danny DeVito, Kevin Spacey, and Steven Spielberg as cameos.

Screened in theatres on July 26, 2002, Austin Powers in Goldmember broke the record held by the previous film, growing approximately $73 million during its opening weekend. By the end of its theatrical run, it had taken in over $213 million in the United States. Despite its commercial success, and the number of accolades that it received (e.g. MTV Movie Award, Canadian Comedy Award, Kid’s Choice Award, BMI Film & Television Award), the critical reaction was generally mixedーmany having pointed out its messy narrative structure. Regardless, it remains to be one of Verne Troyer’s best remembered roles on the big screen. 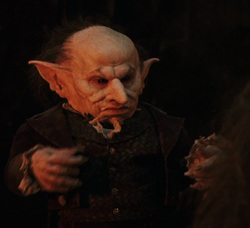 In the winter of 2001, Troyer was part of the cast of the high profile movie, Harry Potter and the Philosopher’s Stone. Based on J.K. Rowling’s novel of the same title, it revolved around Harry Potter’s initial year at Hogwarts after the young boy discovers that he is in fact, a famous wizard. The movie starred Daniel Radcliffe, Emma Watson, and Rupert Grint, as the main leads. Portraying one of the supporting characters, Troyer played as Griphookーone of the goblins who works at the Gringotts Wizarding Bank until the Second Wizarding War; in the movie, he is called to escort Harry through the underground rail system to his vault to retrieve the Philosopher’s Stone.

Originally released theatrically on November 16, 2001, Harry Potter and the Philosopher’s Stone was met with universal acclaim; at the box office, it grossed a record-breaking $32.5 million on its opening day. Nominated for numerous awards, the fantasy film later earned over $974 million worldwide. The second highest-earning movie in history at the time of its release, it is also the second highest-grossing movie of the Harry Potter series to date.

Troyer’s next big role on the big screen came in 2009 with the release of The Imaginarium of Doctor Parnassus. Directed by Terry Gilliam, it centred around a travelling theatre group who is able to take their audiences through an enchanted mirror to explore their own imaginationsーunbeknownst to them however, the leader had made a bet with the devil. One of the starring characters, Troyer played as Percyーthe confidant of the title character, Doctor Parnassus. Other main cast members in the film include Heath Ledger, Johnny Depp, Christopher Plummer, Andrew Garfield, Tom Walts, and Lily Cole.

Released in the United States on January 8, 2010 after premiering at the 62nd Cannes Film Festival, The Imaginarium of Doctor Parnassus earned a little over $1.7 million during its opening weekend, ranking in at number eleven at the box office. It eventually went on to gross $64.4 million worldwide against a production budget of $30 million. Met with mostly positive reviewsーmost of which praised it for its imaginative storylineーthe Academy Award-nominated film also received a Satellite Award, a SOCAN Award, and a Leo Award. 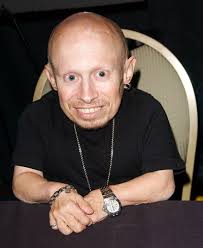 It’s been announced that Troyer will be joining the cast of the upcoming comedy film, The 420 Movie: Mary & Jane (2017). Directed by Robert A. Johnson, it will revolve around two sisters who are trying to help their womanizing father with saving the city. According to IMDb, Troyer will be playing a character by the name of Tito The Terrible; joining him in the cast are Krista Allen, Keith David, Lindsey McKeon, Kelley Jakle, and Kimmy Robertson. Filmed in Los Angeles, California, no official release date has been released as of yet for the film.

Other than that, Troyer’s latest appearances have been in the video game, Let It Die (2016) where he voiced one of the characters and in the TV talk shows Good Mythical Crew (2016), and Oprah: Where Are They Now? (2016).

If you’d like to stay connected with the American actor, you can do so by following Verne Troyer on social mediaーyou can find him on Twitter or Instagram at @VerneTroyer. Alternatively, you can also visit his official Facebook page at @VerneTroyer.