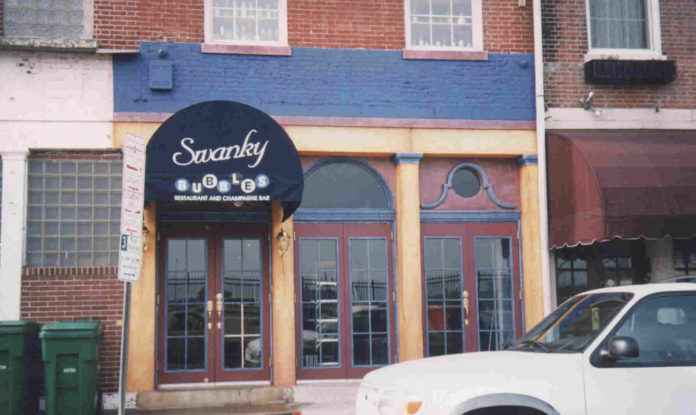 Swanky Bubbles was conceived in 1999 in Philadelphia, Pennsylvania, after owner John Frankowski visited a champagne bar in Manhattan and was inspired to open up one of his own. During its peak years the bar brought in a hundred grand on a monthly basis and was populated by customers. After a few years Swanky Bubbles faltered and Frankowski was usually missing in action, only showing up for a few days in a week and leaving the bar in the hands of co-owner Ryan Dorsey. Unfortunately Dorsey’s methods of running the place prove to be more of a hindrance as he behaves like a patron than a manager. Dorsey was often found flirting with female patrons and comping food and drinks

With things going down the drain they decided to call Jon Taffer and Bar Rescue for help.

Taffer’s wife Nicole, along with a friend, performed her usual recon of the bar as a customer. From her surveillance she learned that Swanky Bubbles had conflicting motifs and there was no way to pinpoint what kind of bar it was.  The menu was overpopulated with dishes that come from a very wide range of cuisines. The bartender who was behind the counter at that time even straight up said that one of the drinks wasn’t really good. Dorsey approached the ladies and made them quite uncomfortable no thanks to his sexual innuendos and his attempts at being “extra friendly”.

After the recon Taffer entered Swanky Bubbles and talked to Dorsey who was quick to put the blame on Frankowski for the bar’s demise even though it began to fail under his watch, not to mention being uncooperative much to the frustration of the show’s host.  Taffer then met with the two owners and made Frankowski realize that Dorsey was more of a liability than an asset. Afterwards a staff meeting followed where the staff vocalized their frustrations such as a very narrow bar area and limited supplies. Frankowski admitted that the bar’s poor income was not sufficient to ensure that they have enough liquor for such a wide variety of drinks. Taffer had the staff write down all of the things they didn’t like about Swanky Bubbles but were not comfortable in saying it out loud.

The feedback written by the staff revealed Dorsey’s priorities that focus on himself rather than the wellbeing of the bar. Frankowski realized that he had to do something about his co-owner if he wanted the bar to survive. Frankowski confronted Dorsey and set him straight after a rather scathing tirade.

To help with the work on Swanky Bubbles, Taffer summoned two experts in the field namely chef / restaurateur Brian Hill and Diageo lead mixologist Elayne Duke. Hill toured the kitchen area and saw the equipment utilized despite being in a very unsanitary condition. He also found out the improper food storage practices of the kitchen staff which can lead to health problems. One of the kitchen staff walked out after taking Hill’s criticism of their operations on a personal level and he also wasn’t exactly aboard with the proposed changes to their work.

Duke met with the bartenders and saw their flimsy and lifeless attempts in mixing drinks. She then taught the staff about the importance of utilizing pleasant scents in making the drink more appealing.

Taffer met with the two experts and they strategized on how to make the bar attractive to single ladies as only a small percentage of the population around the area were married couples. The Bar Rescue host then shared the strategy to the two owners and ordered Dorsey to stop hitting on the female patrons again. Hill featured the revamped menu to the staff with dishes that sport colors that appeal to the ladies. Frankowski finally allowed the general manager Efrain full financial control to restock the shelves with much-needed liquor.

Swanky Bubbles had a soft opening night to test how the changes react to pressure. Customers flooded in and Frankowski took the opportunity to test his bartenders by individually assigning them to at least six customers each. This decision revealed one bartender named Tim who was working inefficiently which forced Taffer to reassign the man to serving tables, and this also proved to be an opportunity for Frankowski to motivate his troops. Tim learned his lesson and gained the confidence to move and work without giving in to pressure. The other bartender Dave worked on the concoctions with an impressive speed and he also entertained the patrons while he mixed the drinks with a smile.

Things were slower on the kitchen as orders piled up and the hungry customers became increasingly impatient. Taffer had Dorsey approach the customers to placate them and the co-owner’s idea of dousing the fires was to comp drinks and anything else the patrons wanted. Eventually things straightened and the customers were asked to fill out comment cards before leaving the establishment. Taffer’s praise went to Tim and Efrain for jobs well done while Dorsey was reprimanded for his actions. The comment cards also sang praises to the hardworking staff but criticism was aimed towards the establishment’s décor. For this Taffer had the staff wield hammers so they could start the renovation process by first destroying the bar.

Four hours before the relaunch Taffer presented the new and improved Swanky Bubbles, now known with the new name Sheer. The establishment’s interior was now equipped with stools in front of the bar that’s visibly more spacious than its former incarnation, plus premium liquor on its shelves. Dorsey made good use of his presence on cyberspace to promote the bar which worked quite well as the relaunch night was flocked with eager customers. Frankowski exhibited a surge of optimistic energy and Dorsey finally learned how to keep customers on the table without resorting to giving away grub courtesy of comping.

Swanky Bubbles Now in 2018 – The After Bar Rescue Update

The bar reverted back to its old name of Swanky Bubbles after Taffer’s work was done. Throughout 2011 the reviews were mostly lukewarm and it seemed that the management also returned the old menu as some complained about overwhelming choices, not to mention being overpriced. The establishment was reportedly dark without much lighting and was also too quiet for a bar.

Around November 2011 Swanky Bubbles was found to be closed down with the staff told that their services were no longer required. There were problems between the owners and the landlord Janice Rimmeir regarding the bar’s liquor license. Two years later the old-school European restaurant Victoria Freehouse was opened where Swanky Bubbles once stood.

Dorsey is now part of the team that’s working on the upcoming nightclub Not of the Ordinary (NOTO) which was originally set for an opening last year but, due to construction delays, it seems that there’s still no set date as to when it will open. Frankowski is quite active on social media and makes frequent mentions of club Cheerleaders Philadelphia.