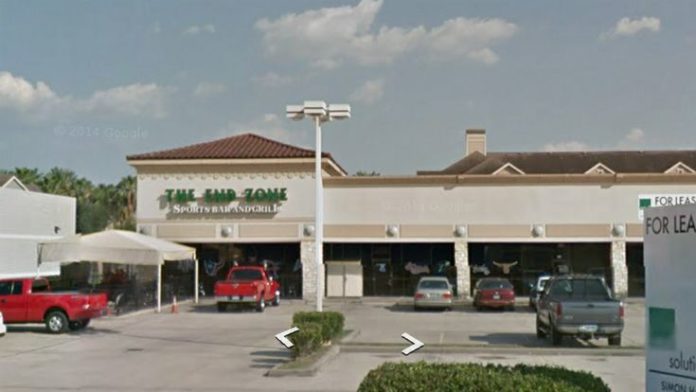 The End Zone Sports Bar and Grill Before Bar Rescue

In 2005, former male stripper and bodybuilder Justin Whitfield left the exotic dance scene and opened The End Zone Sports bar and Grill. Dancing is a lot of fun, Justin says, but you can’t rely on your looks forever and the opportunity came knocking for him to get the sports bar for cheap. Curious locals and sports fans came to check out the new spot, and the business score brought in rave reviews. The End Zone was raking in $100,000 in a month, but as the sole owner, Justin found himself stretched too thin in the business. He brought in his long-time friend of 15 years, Shawn, who is also a former male stripper and an MMA fighter. Shawn was brought in as a co-worker for the bar; Shawn actually sold his truck when Justin needed money for the business. Despite being long-time friends, the two of them did not exactly see eye-to-eye when it came to running a business. Justin feels like Shawn thinks it is more of a popularity contest, so Shawn has let the bartenders drink on the job. Justin also feels like he does far more than Shawn. Further aggravating the problem, the owners’ issues have trickled down to the staff. Now, with all the fighting, the bar is decaying and customers are fleeing from the chaos. The End Zone has fallen more than $200,000 in debt, and if Justin and Shawn cannot iron out their differences, they stand to lose their livelihood.

The End Zone Sports Bar and Grill on Bar Rescue

Katy, Texas, sits 29 miles west of downtown Houston and is known for having a rich sports culture. This fast-growing suburb is located within 20 miles of more than 10 professional and collegiate stadiums. The city has a population of 109,000 residents with a median income of $54,000, but The End Zone fails to catch this young urban crowd. Jon Taffer and his experts pull up to the front of The End Zone. The End Zone is completely abandoned, but Jon points out that there are 1,400 sports bars in America named “The End Zone.” You want to give your bar an original theme and name, but unfortunately, culinary expert Vic Vegas feels like there is nothing that draws him into The End Zone Sports Bar and Grill. The front doors look like the door of an apartment, and because it is in a strip mall, it blends in. Mixology Expert Kate Gerwin agrees with Jon; the majesty of advertising is lost in the otherwise deserted strip mall.

For recon, Jon sends in three of his spies, one of which is a draft beer professional, one who works in a bar, and another who knows the local area well. The recon team enters the 4,200 square foot space featuring a U-shaped bar with 16 beers on tap, two service wells, and an empty stage. Inside, the staff seem more occupied with talking to each other and taking drinks from the shelves for themselves than they are concerned with serving. There is no design or theme on the interior, and a partially hidden draft system. To make things worse, there is a soffit above the bar that is used for storage of liquor. The place has no food credibility; a sports bar connects you to the game, and there is no connection in this bar. The owner, Justin, is walking around and having a beer. Justin has actually neglected his taxes so now the bar has a $100,000 tax lien against it. Jon also explains that Shawn used to strip with Justin, which is how the two know each other. 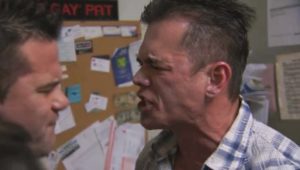 Stephanie, Shawn’s wife and also bartender, and Dana, Justin’s wife and also bartender, sit with their husbands separately. Jon points out that there is friction between all four of them. Taylor, another bartender, is sent off to manage tables that are outside of her zone. The recon spies order two beers, but the state of the bar is a mess; there are bottle-caps and straws everywhere. The beer does not taste good and even tastes sour, which Jon explains is because of the system not being maintained and cleared consistently. If you don’t have great beer in a sports environment, you have nothing. The spies order a burger, pizza and wings; the kitchen is also a huge mess and covered in filth and dirt. Vic says that they will make people sick, and cook Kevin is not using gloves to work with the food. The cook also opens the refrigerator with his bare hands, then goes to work touching raw chicken. The raw meat continually cross-contaminates; inside the fryer with the chicken wings, foam and filth bubble up to the top of the surface and this means that the oil has not been changed in a month.

Another bartender, Kiana, has had about 4 to 5 drinks, which Kate says that the bartenders are responsible for being sober so they can manage the money coming into the till. Kiana then puts her foot up on the bar and falls over. She cannot even stand, and this type of employee interaction in front of customers is incredibly unprofessional. In the kitchen, Kevin has committed more than 6 health code violations during the preparation of the meal. Jon is infuriated about the health code violations and actually calls his recon team, instructing them to not eat any of the food. However, Jon’s call comes in too late after one of the spies eats some of the pizza. J.T, the spy, spits out the pizza into a napkin and the recon team sends their food back to the bar.

On the stage, a male stripper steps up onto the “main stage” at a sports bar and performs a strip tease. Jon and his car full of experts have their work cut out for them, and Vic and Kate are repulsed. When you go to a bar and a male stripper comes out, you feel awkward and like you never had the intent for going up to a strip club. Justin, the bar owner, steps up on the stage and starts strip teasing as well, and most of the clientele ends up leaving. Jon makes a comment that The End Zone “is dealing with the wrong balls here.” Taylor, a bartender, then says that she works for Justin and not for Shawn. Jon and his team of experts step into the bar finally to gather the staff and the owners and set to work to correct the bar. Taylor and Stephanie get into a fight about this confrontation, which Jon has to break up.

The End Zone Sports Bar and Grill, now known as the Houston Sports Hub Bar and Grill, is still open to this day. Fortunately, Shawn is no longer a co-owner at the bar and does not enable a toxic work environment full of conflict – Justin is 100% owner and still works with his wife Dana. The bar was revitalized and the name was done away with, thanks to Jon Taffer’s incredible research, to give the bar a much more unique sports stadium appeal. The menu was revamped with more sports-focused meals, including hot dogs, pizza, chicken wings, burgers, and much more.

The Houston Sports Hub now has an incredibly solid 4.5 star rating on Yelp across 64 different reviews, with an average night costing a patron around $15 to $25 for beer and a meal. Most of the praise is directed towards the food and the new wall of big screen TVs, perfect for catching any number of games across many different sports.