Guy Fieri Net Worth 2018 – How Rich is Guy Fieri Actually? 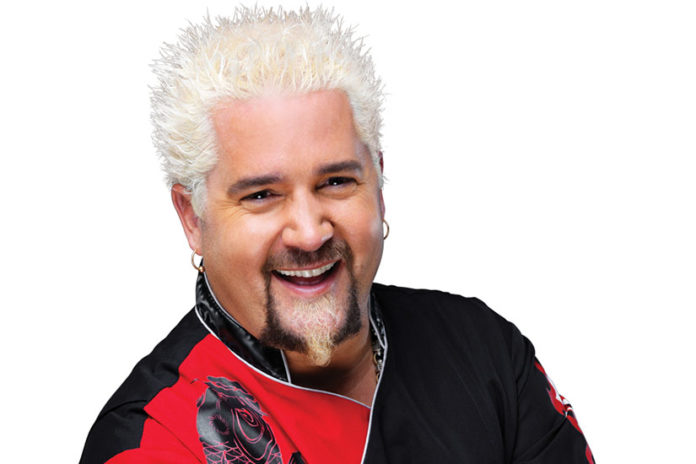 Guy Fieri is one of the more beloved television personalities out there. Guy is a restaurateur, but he’s probably best known for his show Diners, Drive-Ins and Dives on Food Network. Whether you know Guy Fieri for his food or for his larger than life personality, you may be curious as to what kind of money this entertainer actually makes. In this article, I’m going to be answering that burning question for you. I’ll talk about what Guy Fieri did to become so successful, while also making sure to address how much money he has been able to make over the course of his career. Without further ado, let’s head into Flavor Town and learn more about this Food Network legend.

How did Guy Fieri make his money and wealth?

Guy Fieri, also known under his birth name Guy Ferry, was born in Columbus, Ohio. Although he was born in Columbus, he grew up for most of his life in Ferndale, which is a town in a rural area of California. His life changed for the better when he entered a foreign exchange program, and he spent some time in France. During his time in the country, which is famous for its culinary marvels, Fieri became interested in cooking as a career. Once he returned to the United States, Guy spent his time selling pretzels and washing dishes, among other odd jobs, as a way to raise money to finance a culinary education in France. His earliest culinary experience involved cooking at the Red Lion Inn, which was located in Eureka, California. He eventually ended up attending the University of Nevada, Las Vegas, where he graduated with a bachelor’s degree in hotel management in 1990. 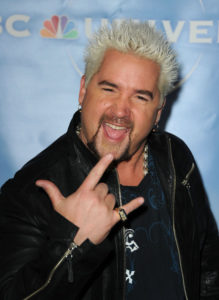 That may seem like an odd degree choice, but hotel management is actually a pretty popular pick for someone who is looking to enter the restaurant business, and he definitely did. After he graduated, he worked in California and helped out restaurants like Stouffer’s and Louise’s Trattoria. Although it’s not really what we know him for today, back then, Guy Fieri was known as a pretty skilled trainer, recruiter, and restaurant manager. He opened his very first restaurant in 1996, a little place called Johnny Garlic’s in Santa Rosa, California. The place was so successful that it allowed him to open a second location in Windsor, a third location in Petaluma, and a fourth location in Roseville. Following this success, Fieri and his business partner Steve Gruber were able to open Tex Wasabi’s in Santa Rosa.

During the mid-2000’s, Guy Fieri competed on The Next Food Network Star, a competitive reality television program that the channel hosted in search of new faces for their line-up. Fieri won the second season, and he was awarded a six-episode contract for Guy’s Big Bite, which premiered on June of 2006. Guy’s Big Bite ended up being pretty popular, and it still airs today. Food Network gave Guy another series in 2007 called Diners, Drive-Ins and Dives, which would probably become his most popular show ever. If you’ve never watched the show, it basically involves Guy driving all around the country and trying out food at different local, down home local restaurants. It’s always a good time, and Diners, Drive-Ins and Dives has received a lot of positive press for drawing attention to locally owned, more humble restaurants. 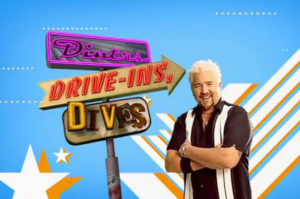 Due to his popularity on these two platforms, Guy Fieri became a well-established name on Food Network and on television in general. Over the course of his career, he has appeared on Food Network programs like Ace of Cakes, Paula’s Party, Dinner: Impossible, Ultimate Recipe Showdown, and The Best Thing I Ever Ate. Starting in 2010, Guy worked as the host for Minute to Win It, a short-lived but very popular game show that aired on NBC. It’s worth noting that not all of the reception toward Guy’s rise to fame was positive. He opened his very first New York City Restaurant in 2012, a place called Guy’s American Kitchen and Bar. This eatery received from very negative reviews, the most notably of which came from Pete Wells of The New York Times. Wells left a negative review that was so scathing that it eventually went viral.

Regardless, Guy didn’t seem all too deterred. A couple of years later, in 2014, he opened Guy Fieri’s Vegas Kitchen and Bar in Las Vegas. Around this time, he also premiered his next Food Network program Guy’s Grocery Games. This show echoes the successful Food Network formula found in Chopped. It takes four contestants who battle through judged rounds, where each round has a “twist” related to the setting of the competition, which is a grocery store. As of this writing, all three shows are all ongoing series on Food Network, and Fieri as a personality sort of serves as a staple to the Food Network lineup as fans know it. Love him or hate him, you can’t deny that Fieri has done an extraordinary job at leaving his mark on both the cooking world and the entertainment world.

Guy Fieri has been married to his wife Lori since 1995. Together, they have two sons: Hunter and Ryder. Although Guy has restaurants all over the country, he and his family call Santa Rosa their home.

Since Guy works in television, it can be difficult to exactly determine how much he makes per year. It isn’t like he’s a professional athlete, where his income is public. However, taking a look at all of the different projects that Fieri was involved in in 2016, one can estimate that he makes approximately $450,000 per year.

How much does Guy Fieri make per day?

If we use his estimated salary as a starting point, then we can just use some basic math to calculate Guy Fieri’s daily income. In a year consisting of 365 days, Guy Fieri makes approximately $1,230 per day. That definitely isn’t bad coming from a guy who started out selling pretzels.

What does Guy Fieri drive? Picture of Guy Fieri’s car 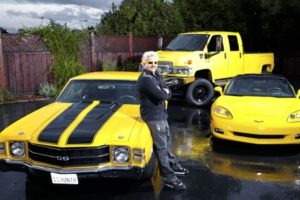 If you’ve ever watched Diners, Drive-Ins and Dives, then you’ve probably seen Guy driving around in some pretty cool cars. Are any of those cars actually his? As it turns out, Fieri is a very proud car collector, mostly specializing in classic American cars. His collection includes a 1976 Jeep CJ-5, a 2007 Shelby Cobra, a 1971 Chevrolet Chevelle, a 2011 Chevrolet Camaro, a 2007 Chevrolet Corvette, a 1969 Chevrolet Corvette, a 2006 Chevrolet Kodiak, a 1968 Pontiac Firebird, a 1969 Chevrolet Impala SS, a 1967 Chevrolet C10 pickup, and even more. Although food may be Fieri’s passion, I think it’s safe to say that car collection is more than just a hobby for him, too.

Just looking at the different shows that he has out, it’s pretty clear that Guy Fieri is a nice guy. His show Diners, Drive-Ins and Dives is dedicated specifically to giving publicity to small businesses. It isn’t much of a surprise to hear that Fieri is also known for being charitable in his person life. In 2010, he founded the Cooking with Kids Foundation, which is dedicated to food education and youth outreach.