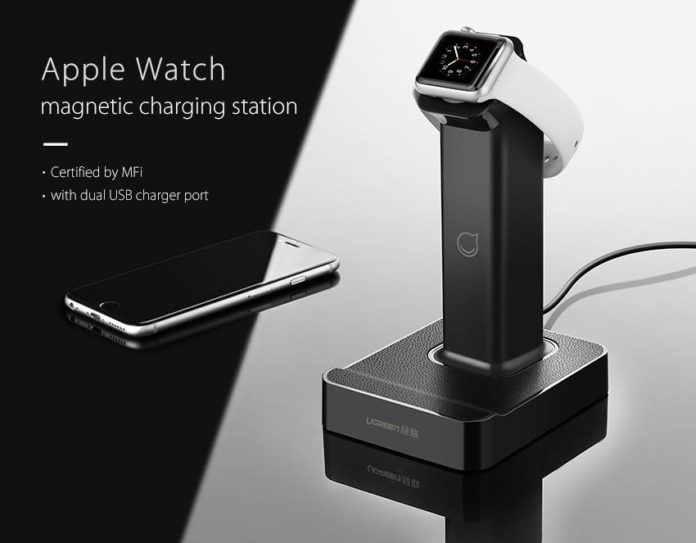 If you own an Apple Watch, then you’re probably familiar with how an Apple Watch is charged. Unlike most devices, which use a traditional cable or cord, the Apple Watch is charged used a magnetic charging cable. Basically, you just touch the back of the watch to the magnet, which is plugged into the wall, and your device charges. This was the smartest way to design the Apple Watch, since it made it to where you didn’t have to worry about the watch face being bulky to support a more traditional charging port. As it turns out, this design feature also allows for some pretty interesting charging configurations, too. Since it’s so different from what people usually deal with, there’s a lot of room for innovation.

UGREEN’s Magnetic Charging Dock is one such example of that innovation. It’s a very unique product that serves as both a magnetic charging dock for your Apple Watch AND as a stand. This is clearly a pretty convenient idea, but how well does it all come together in practice? In this article, I’ll be reviewing some of the specific details of the UGREEN Magnetic Charging Dock, and then I’ll give my own personal thoughts on the product. I’ll talk about whether or not it actually works, and I’ll also talk about whether or not it’s actually worth your money. Without further ado, let’s see if we can’t learn a little bit more about this neat product. 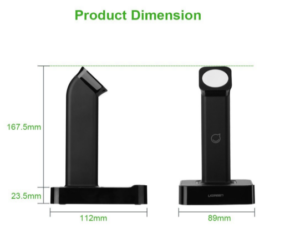 Coupon Code: Use SJA5V7U9 to receive 15% off your purchase

Just based off of its design, you can probably figure out how the UGREEN Magnetic Charging Dock works. You have a stand which is plugged into the wall, and that stand can be used to charge your Apple Watch. Unlike your standard Apple Watch charger, the arm that your charging Apple Watch sits on is posed in such a way to where you can still have good visibility of your smartwatch. As an owner of a smartwatch, you’re probably familiar with how annoying it is to have to plug your watch in and walk away until it’s fully charged, leaving you effectively watchless. Of course, you could always just walk over to your watch while it’s charging, but if you do something like that, then you may as well be keeping the time with a smartphone. The whole point of a watch is that it allows you to check the time in a convenient way. With this magnetic charging dock, your Apple Watch can charge while completely remaining in your view the entire time.

This is also a really cool product because it can charge more than just an Apple Watch. As you probably know, just because you own a smartwatch from Apple doesn’t mean that you can just throw out your smartphone. The base of the charger has two USB ports, which can charge just about every compatible USB enabled device, like the iPhone, iPod, or iPad. If you’re an Android user, then you should also be able your Android smartphone or tablet. So even this is certainly intended for Apple Watch users, you should be able to use it for just about any of your charging needs. It’s certainly a larger piece of equipment, but its versatility makes up for a lot of that, I think.

How well does the UGREEN Magnetic Charging Dock actually work? 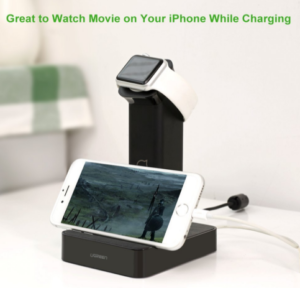 Well, it’s pretty easy to make these kinds of promises about a product. Now that you’re familiar with what this device is capable, you may be wondering how well it all actually comes together in practice. If you’re interested in this product, then you might be happy to hear that it works pretty well. The charging features all work as you would probably expect, and the ability to charge more than just an Apple Watch at once is very convenient. Due to all of the wildly different straps that you can get with your Apple Watch, it can be difficult to find a stand that works as a one-size fits it all situation. Most stands are very small, and they involve “slotting” your magnetic charger into something else. UGREEN’s Magnetic Charging Dock is different, because your watch just sits on top of the charger.

So right off the bat, you can be happy that this charging dock is most universal as far as Apple Watches go. It’s designed in a pretty clever way to account for different band sizes, and you can definitely see that when you get your hands on it. Also, the stand is sleek and remarkably well built. It may be hard for you to justify spending this kind of money on a stand, but you should rest assured in knowing that it’s at least a very well built stand. It’s not something that I think could easily break, although I obviously don’t advise that you put any unnecessary stress on it, either. Even if you do encounter some kind of issue in terms of build quality, UGREEN includes a warranty card with every purchase, so you have that to fall back on if you need to.

Is the UGREEN Magnetic Charging Dock really worth it? 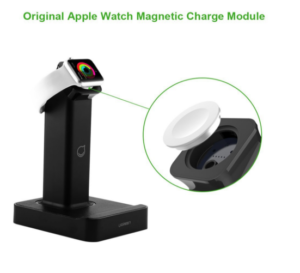 Whenever you’re on the verge of making any kind of purchasing decision, this is the sort of question that crosses your mind. Is my money worth what I’m about to be buying? Without discounts or sales, the UGREEN Magnetic Charging Dock will run you about $50, which may seem a little steep for something that is just used as a charger. However, there are a couple of things to consider. First of all, this effectively replaces your standard Apple Watch charger. Those magnetic chargers cost $29 on their own and, as I mentioned before, there are a few flaws in their overall design. If you’re someone who has to replace your charger on a regular basis due to fraying or damage or something, then I think that this stand is a no brainer. It’s much more durable than your standard charging cable, so you’ll make your money back pretty fast. So although the $50 price tag may seem like a lot, it’s not so bad when you consider the price of the “vanilla” charger as it is.

It’s also worth noting that this is a lot more than just a charger. It’s also a stand, and it’s also something that you can use to charge multiple devices at once. There is a ton of utility behind the UGREEN Magnetic Charging Dock, and it’s something that I think that someone could get a lot of use out of for a very long time, especially if you use your Apple Watch a lot. It’s really up to you to take a look at your own situation to determine if you’ll be able to get your money’s worth with this product. However, if you think that you have a need for something like this in your life, I can say with a great deal of confidence that this is one of the better Apple Watch magnetic charging stands that money can buy, especially at this price point. I highly recommend it to anyone looking for something like it.