Betsy DeVos Net Worth 2018 – The Secretary of Educations Net Worth 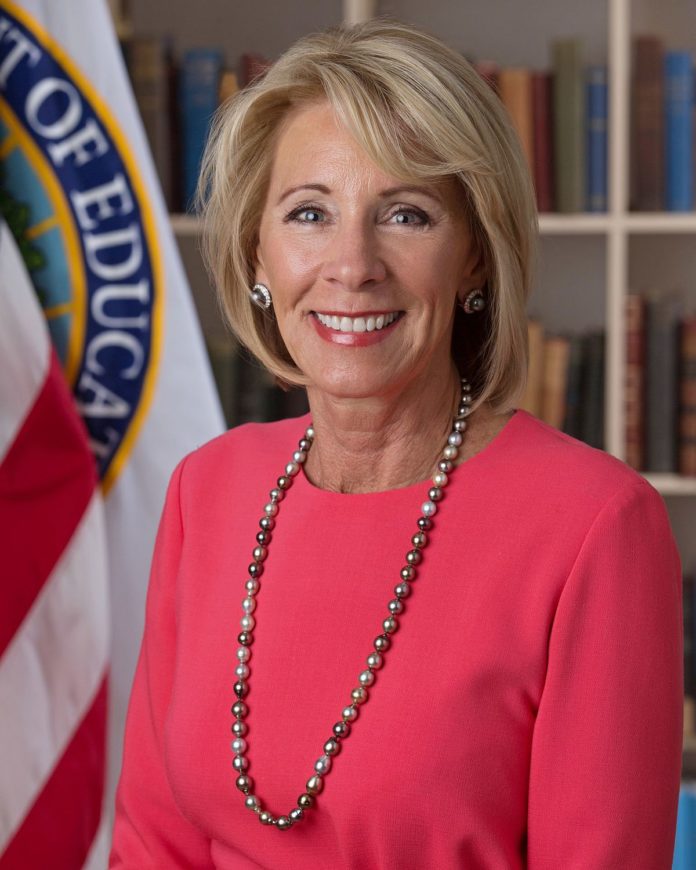 President Donald Trump’s cabinet is the richest presidential cabinet in history, and Secretary of Education Betsy DeVos is one of its most affluent members. Although Betsy DeVos and her husband Rick DeVos have been in involved in education philanthropy since the early 90s, Betsy’s lack of experience has been caused many people to call her competence into question. However, her past financial contribution to education have made a positive impact.

How DId Betsy DeVos Make Her Money & Wealth?

Even before her marriage to billionaire Dick DeVos, Betsy DeVos grew up with great wealth. Her powerful family has supported her political and ventures. Additionally, she inherited some of her father’s wealth after his death in 1995.

Dick DeVos is the son of billionaire Richard DeVos, the founder of Amway. The DeVos family is worth over 5.6 billion. The family controls many companies both large and small. The business empire’s revenue, along with Betsy DeVos’s personal income is a primary source of their philanthropy.

How Did Betsy Devos Get Rich? 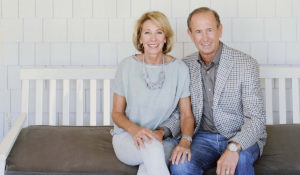 The Prince family was conservative and influenced greatly by Calvinism. Betsy DeVos and her siblings were educated at Christian institutions and the family was very active at local churches. DeVos grew up as a member of the Christian Reformed Church in North America. She is also an elder at Mars Hill Bible Church in Grand Rapids.

DeVos was educated at the Holland Christian School network from Pre-K through her Senior year in high school. She graduated from Calvin College and earned political science and business administration degrees.

Ever since college, DeVos was an active participant in activism and fundraising. Betsy DeVos made her first political appearance in 1982, when she joined the Republican Party. She was a precinct delegate for the party and served 16 terms of two-years each From 1992 to 1997, she was a Republican National Committeewoman. She also served as the Chairwoman of the Michigan Republican Party from 1996 to 2000.

In 2004, DeVos raised over $150,000 for the 2004 reelection campaign for George W. Bush. She later hosted a Republican fundraiser in 2008 that then-President George W. Bush attended as well. During the Bush Administration, DeVos assisted the administration on various matters and also served as the finance chairwoman for the National Republican Senatorial Committee. The DeVos family has contributed over 17 million dollars to Republican efforts since 1989.

In 1980, Betsy DeVos married Dick DeVos. Her husband is the son of Amway founder Richard DeVos. The pair has worked together on many business ventures. They have worked together in the Windquest Group for several decades, investing in clean energy and manufacturing. The couple are also core investors in Neurocore, a company which researches various neurological disorders. She has invested a sum worth $25 million in the company.

Betsy and Dick DeVos founded the Dick & Betsy DeVos Family Foundation in 1989. The company’s philanthropy is faith based and has donated over 139 million since its inception. Although the foundation has donated to a wide variety projects and institutions, it has primarily funded those relating to education, medicine, and research.

Betsy DeVos has held many leadership positions throughout her business and political career. These include the Kendall Center for Art and Design, the Kennedy Center for the Performing Arts, Art Prize, and Kids Hope USA.

Betsy DeVos was announced by then President-elect Donald Trump as his Secretary of Education on November 23, 2016. Her nomination was controversial. While DeVos had been involved in politics and philanthropy related to education for years, her lack of real experience raised many eyebrows. DeVos nonetheless received numerous accolades from conservative educators and proponents of school choice.

On January 17, 2017, Betsy DeVos had her confirmation hearing. The hearing quickly became a debate. Democratic senators in particular questioned her wealth and experience. Despite the rabid opposition of the Democratic Party, DeVos was still given the final vote on January 31st. She had 12 votes for her election and 11 against it. Vice President Mike Pence’s vote broke the tie. DeVos is now actively improving the Michigan education system, as well as travelling throughout the country to solve various issues.

Betsy DeVos has been married to Dick DeVos since 1980. The couple has four adult children and one grandchild. The couple works closely together in political and business matters.

Dick DeVos is worth 5.6 billion, and the DeVos family is one of the richest in the world. Dick DeVos’s father is Amway founder Richard DeVos. Dick served as the company’s CEO for many years.

The DeVos family has several residences. Their primary residence is a massive 22,000 square foot mansion that cost them over $10 million to build. They also have three homes in Michigan. They also own a yacht and three residences in Windsor, Florida.