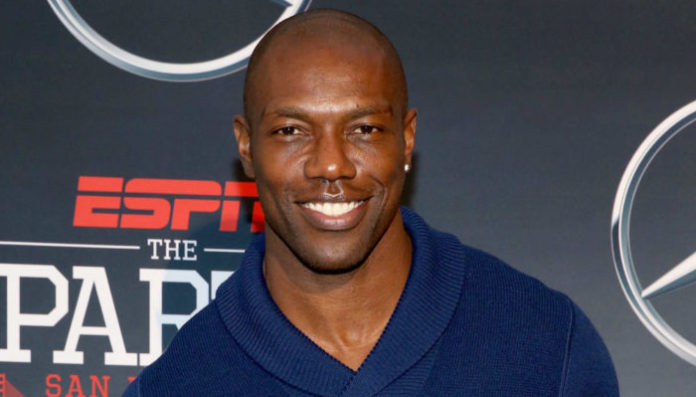 Terrell Owens, also known as T.O., is an man with many talents. Some of his most well-known talents include being a professional wide receiver for the National Football League, motivational speaking, modeling, and so much more. Today we are going to take an in-depth look at how Terrell acquired his riches and fame.

How did Terrell Owens’ make his money and build his wealth?

An Alabama native, Terrell Eldorado Owens was born in Alexander City, Alabama. Terrell continued to live in Alexander City whilst being raised by his grandmother as his mother was a teenager. His mother, Marilyn Heard, was seventeen years old at the time of his birth.  Terrell was not aware of his father until he was eleven years old, when he discovered that his neighbor was his father and not the man that he was told was his father for years prior.

As a child, Terrell, enjoyed football, both playing and watching the game, but never at a competitive level. While he was skilled as a child, Owens’ family prohibited him from competing in the sport until he was in high school. He first football team was at Benjamin Russell High School.  In his junior year he became a starter as a result of a teammate not being able to fulfill their duties as a team member.

Terrell attended the University of Tennessee after high school. While enrolled, he participated in several sports including basketball and football. As a result of participating on the school’s basketball team, Owens’ played in the NCAA Basketball Tournament of 1995. During the tournament, his team played in the first round and was then kicked out of the competition after losing to Connecticut.

During his college career, Terrell played with jersey number 80 in a nod to his favorite football player, Jerry Rice. Terrell did not become a starter for the school’s football team until his sophomore year when he debuted as a wide receiver for the team. During his sophomore year, he caught 38 passes and racked up 724 yards. During this year, he also completed eight touchdowns.  Due to his impressive stats, Terrell started to gain respect from the NCAA, which led to him receiving more coverage during his senior. During his senior year, Terrell completed 43 receptions, rushed for 657 yards, and completed a touchdown.  Terrell then went on to participate in the Senior Bowl, as a college all-star, due to holding the single-season reception record.

After graduating college, Terrell was drafted by the San Francisco 49ers in 1996 during the third round of the NFL Draft, and was the 89th overall selection. It was reported at the time that he was drafted due to his impressive size and speed while demonstrating his abilities. Terrell had an impressive first season with the 49ers. During his first season, Terrell competed against several teams including, but not limited to the New Orleans Saints, Atlanta Falcons, and The Cincinnati Bengals. Owens’ first professional game after being drafted was against the Saints. During the game, he had a noteworthy special teams play. The first catches that he made were against The Carolina Panthers. He caught two passes for a net gain of six yards. A week later, in his game against The Atlanta Falcons, he went on to complete a kick-return for 17-yards and also completed a single catch for 30 yards.

Terrell’s first professional touchdown was in October of 1996 against The Cincinnati Bengals during the fourth quarter. The touchdown was completed for a gain of 45-yards and lead to The San Francisco 49ers winning the game by 7 points.  Terrell made a big name for himself during his second professional season in 1997. Terrell and fellow teammate, Steve Young, became very compatible with each other, and it showed on the field.  This rapport lead to the 49ers winning 13 games for the 1997 season. Terrell finished the season with nine touchdowns and over 900 yards. In 1998, Owens created a household name for himself when he caught the game-winning touchdown against The Green Bay Packers. It was the first time that the 49ers had beaten the Packers and they did so with a three point lead with seconds left on the clock.

The next season was a bad season for Terrell’s whole team.  The team lost their quarterback as he was not able to pass necessary medical tests. This was a big let-down for the team as it seemed as though they lost their compatibility and were no longer working together. This also lead to the team only being able to win 6 games for the entire season. Despite the team’s trouble, Terrell ended the season with thirteen touchdowns and over 1,400 completed rushing yards. 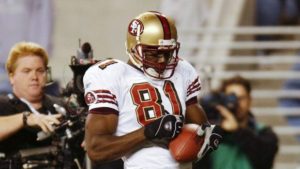 In 2002, the team had 6 losses, and as a direct result, the head coach of five years, Steve Mariucci, was released and quickly replaced by, Dennis Erickson, a former Seattle Seahawks coach. After the coaching change, the 2003 season was still very lacking in both terms of how the team performed and how the coaching staff handled the team. The team completed the 2002 season with a 7-9 record.  After this particular season, Terrell decided to leave and was traded to the Philadelphia Eagles. The trade was not smooth as Terrell ran into several problems along the way. The main being that The 49ers believed that they still had the right to Terrell and his contract. Terrell disputed this along with The NFLPA. The 49ers and Terrell soon came to a conclusion allowing Terrell to be Traded to the Philadelphia Eagles after a several month long battle. Terrell’s contract with the Eagles at the time was widely reported by several sources at a time to be over $ 40 million dollars, plus a signing bonus of about $10 million which was an unheard of the amount when it came to football players at the time.   The news coverage opened up the opportunity for Terrell to get a book deal, and after signing with the Eagles, Terrell released his a book titled “ Catch This!” The book was over 288 pages in length and was ghost written.

Terrell’s first season with the Eagles in 2004 was great for both the team and Terrell, Due to his great performance with the team Terrell quickly gained popularity by both fans of the Eagle’s and throughout the league as a whole. Unfortunately, Terrell injured himself in December of 2004. Terrell suffered a severely fractured fibula and a sprained ankle after he was tackled using a maneuver that has now been banned. The maneuver was called The horse-collar tackle and could lead to serious injuries such as the one experienced by Terrell. The Eagles were on their way to the super bowl and Terrell vowed that he would play in the big game, no matter his condition, and he did just that. With the help of physical therapy and other useful tools, Terrell was back much sooner than the expected time frame. Terrell played in the game and played well, but the Eagles Ultimately lost despite their best efforts.

In 2006, Terrell was cut from the Eagles. He then went on to play for the Dallas Cowboys. He signed a three-year contract worth $25 million and had several bonuses promised to him. After his first game, Terrell severely injured his finger leading him to need surgery and forced him to miss four games. This was the beginning of the end of his football career. He left Dallas after his second season and continued to play for several other teams but continued to get cut after just one season with little to no success with each team.

What does Terrell Owens Drive? 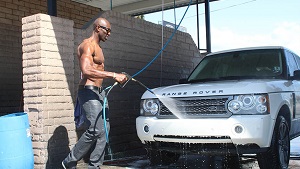 Terrell’s current car is white fully equipped Range Rover Sport.  The vehicle starts at over $65,000, and even with its SUV shape and size it can still go 0-60 in 5 seconds.

What is Terrell’s Most Legendary Touchdown Celebration?

Well, in 2002 in a game against the Seahawks Terrell scored a touchdown, then will still holding the ball he actually pulled a Sharpie permanent marker out of his sock.  He then proceeded to  sign the football and give it to a front row “fan.”  The “fan” turned out to be a financial adviser, and not just any financial advisor, but the financial advisor of Shawn Springs, the man who was covering Owens on the play. As a result of the incident, Terrell got his own rule, and the NFL created a ban on carrying any “foreign objects” during play.

Terrell has supported several different foundations including, but not limited to, Leeza’s place, Andy Roddick Foundation, and even The Elton John AIDS Foundation. These are just a few of his charitable actions. 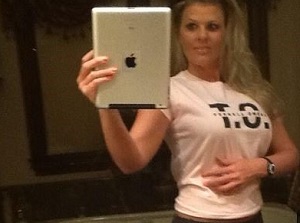 Yes! Terrell has been married since 2014 when he married Rachel Snider. Although, The two are in the middle of a divorce at the time of this writing.

Does Terrell Have Children?

Yes! Terrell has two daughters and two sons. Their names are Kylee, Atlin, Dasha, and Terique.  Due to Terrell being involved in several relationships in his life, each child has a different mother.

Does Terrell Owens have a Mansion?

Terrell currently lives/owns a mansion worth $2.2 million in Sherman Oaks, California.  The football star is allegedly currently in foreclosure proceedings over the home, as well as a dispute with his wife over the ownership of the property.  Nonetheless, the home still offers a square footage of 4,250.

Chris Freeman
Chris went to school at the University of Maryland, and while rooting for the Terps, he began his career of freelance writing. Now a college grad and a passionate teacher, he enjoys taking the time to write articles and research the next big thing.
RELATED ARTICLES
Sports