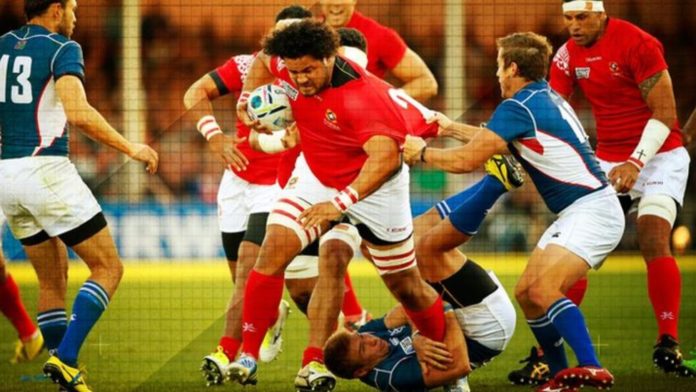 When we think of hits in sports, we often think of homeruns, grand slams, or the crack of a cricket bat making contact. However, to those who enjoy more contact oriented sports, we can instead look at contact and strikes that offer a visceral excitement to the crowds. Much as one would expect in the ancient crowds at the Roman Coliseum, sometimes a hard strike can elicit cheers from the masses, fame, and people talking about where they were when they saw it, more so than the game itself. Here, we take a look at the top 10 bone crushing, body lifting, or lights-out biggest hits in sports. Since it’s hard to get an objective metric that would please everyone in comparison, this list will not necessarily be in any order, but more a showcase of some of the hardest hits or impressive acrobatics as a result of said hits that the sports have to offer.

There’s a reason that boxers often call the chin “the button”. As a result of the increased pressure one can apply with a punch to the area, and the distinct ability for the lower jaw to slam into the upper jaw, causing the brain to subsequently jostle around in it’s skull, it can cause massive damage and end out a fight like holding the power button on your computer. In this case, Tyson takes it to the extreme, nailing Jose Ribalta right in the sweet spot, causing a geyser like spray coming off the punch, and effectively a “control alt delete” of his opponents cognitive functioning. Amazingly, Ribalta ended up coming back up before the ten count, and kept fighting for a bit longer, ending the match in a TKO win for Tyson. Not many men could throw a punch like that, and fewer still ever have a chance of getting back up from one, so congratulations to both Tyson and Ribalta for such a performance that people still talk about to this day. To witness it yourself, click here .

9. Having a Craic, Cracking Bones

While very foreign and peculiar to those outside the Emerald Isle, Ireland holds one of the most vicious and ancient sports around, Irish Hurling. This intense mix up that can remind one of La Crosse, Rugby, and Football has plenty of hard hitting action, from clothesline strikes, 100mph balls cracking into players, and body slams that yell “Get out of my way!”. What makes this hit all the more incredible is how the player with the ball so aptly gains control, strikes, and then goes on his merry way to (maybe) bean another player with the ball with enough force to grow hair on the chest of anyone who could feel it whizz by. On the part of the player who did get hit, we can applaud him on an excellent recovery fall and jumping right back up (looking at you, FIFA players). To see the hit yourself, click here.

Reggie Bush is a favorite of many NFL fans, with plenty of charity work and consistently great work on the field. His introduction though was more than a little rough when he made it up to the big time. Nailed by opponent and Philadelphia Eagle player Sheldon Brown with a textbook tackle that Bush wasn’t expecting, the hit was hard, fast, and a great example of transfer of force if you plan on holding a Physics lecture. After the hit, Bush took some time to get back up even with all the padding and protection that the NFL requires. Despite this hard welcome, Bush has continued to do well in the NFL. No reports on whatever happened to that ball that flew away, though. Here is the hit for your viewing pleasure.

Most of the hits on this list have a separate hitter and hittee, if you will. This time though, this hockey player managed to make it easy on everyone else and just clothesline himself in the throat when heading off the ice. Luckily the player was wearing his hemlet, or the injury could have been significantly worse. Remember kids, when going to a door with a long object, have it pointing vertically and not horizontal to avoid this sort of pain and undoubted embarrassment, as this not only hurts the body, but can cause a months long injury to the ego. To see what not to do, click here .

To the uninitiated, one thing must be known about Pro Bull Riding: it may as well be called cowboy tossing. More frequently than any other sport, PBR can show some of the hardest hits against players that are possible, partly because those inflicting the hit aren’t other people but about a ton of incredibly angry New York Strip steak. As a result over the years, there has been cases of head to head contact (causing severe injury and even death), stomping, and other such intense mishaps that immediately cause a turning of the stomach and a hope that the rider survives. There are also moments where the guardian angels of the sport, Rodeo Clowns, try to get between the bull and the rider to ensure the rider has a chance to get to cover before being stomped or gored. Such is the case here, and it turns out the Clown this time has some guardian angels of his own, being flung well over his own body height into the air and gaining the attention of the bull, only to be able to land on his feet and regain control of the situation. And you thought you had to handle some serious bull when doing your job. To see the acrobatics, click here .

Coming in as the middle entry of the biggest hits in sports comes from an unusual source: the Equestrian sports. Usually seen now as a softer sport reserved for the richer country folk, sometimes the horses don’t quite behave as desired. Such is the case here, where a presumed race horse fully decked out in English Saddle had no interest in being kept in the starting block. In an attempt to cut off the horses escape, two people try to intimidate it back towards the start point, only for the horse to give the interspecies sign for “out of my way”, a swift headbutt that knocks out the person cold. Much like you shouldn’t always listen to the idea of “grabbing the bull by the horns”, you almost certainly should never go directly in front of a galloping horse unless you want a head shot that’d make Mike Tyson proud. To see what amounts to a horse uppercut, check it out here .

We’ve all done it in one way or another. At a pool party or community pool, we’ve tried to dive to look cool, and landed about as flat as a pancake onto water. And it hurt. But what hurts more? Doing that at great height, and in front of a big international crowd. Unfortunately for this athlete, she did just that. While without the audio it doesn’t look too bad, the physics makes up for it. If not properly performed, a fall into water from about 15 feet can be about as painful as landing on concrete as the water resists allowing the person to go through it as much as possible. This is worsened by the fact she lands with a few of the most painful bits hitting water first: the wrists, head, back and ankles. You can tell when she comes up there’s not only disappointment in what amounts to a zero score, but also pain from the massive hit. To her credit though, it looked cool until she hit water. To see the splash, click here.

On this list, there have been none that have made me pray under my breath for the soul of the recipient of the hit. This one breaks that streak. Muay Thai Kickboxing has always been an exceedingly violent sport, with some of the hardest strikers and fighters to enter the ring, who can take and dish out with the best. In this case, the combination of a side kick and then a spinning kick is absolutely devastating, causing the opponent to drop like a statue being torn down. A hit like this not only calls the fight, but due to the extensive possible brain damage from such a concussion, can be a career ender. You can almost see the poor other fighter’s childhood memories fall alongside his drool. One can also notice after the strike that the entire fighter’s body seems to shut down, and the ref deftly grabs his arm when checking for vitals, a sign that the fighter may have been seizing up in an attempt to recover. We hope that he recovered from this without any long term damage, but for now, all we can say is good night, sweet prince. To see what could only be termed as a brutality, click here .

For this one, we’re going to have to change the format a bit, instead of a gif, to full appreciate the hit of this, you need the sound on. During a high school volleyball match, a girl shows some real power in her spike. Not only does she nail the ball, and then the ball clocks out a player of the opposing team, but even after that there is enough momentum left to take out a bystander. It’s rare to see an accidental two for one, especially when it’s not a pro game. While we have no idea on who the spiker is, we can only assume she’s going places. Maybe pro volleyball, maybe not, but definitely going places. To see and hear the mayhem, click here .

No list of greatest sports hits could be complete without one of the first and most satisfying of all sports hits, the Earl Campbell Touchdown. While the footage is a little to grainy to make out the team he was playing for at the time, Campbell was known to play for the Packers and Oilers back in the day, and was often referred to as the Human Bowling Ball for his ability to just roll over people without losing momentum. In this clip, referred to by fans and football aficionados alike as the “stiff arm from hell”, Campbell not only takes the ball to the end zone, but also an opponent who dared tried to stop him, dropping him off just past the line as well, making this the first recorded time where instead of spiking the football to celebrate a touchdown, one player used another. To see this classic clip, click here .