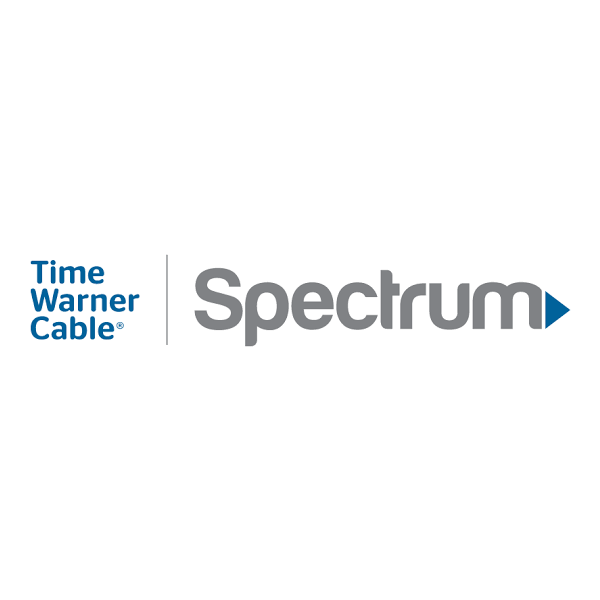 Shopping for a router or modem can be frustrating. ISPs have all sort of nonsensical rules and regulations about which technology you can and cannot use. Fortunately, as a patron of Time Warner Cable/Spectrum internet services, I have compiled a list of routers and modems that are confirmed to work with Time Warner Cable/Spectrum. Some of the routers listed below double as modem units, which means that while they might cost a little more than your average router, you can ultimately save money by not paying the monthly rental fee for a modem that your ISP requires you to have. 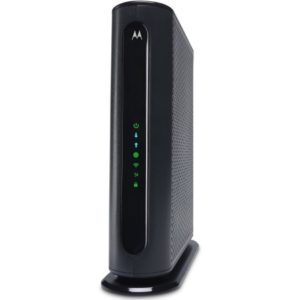 Motorola may have the most powerful claim to fame for routers that amplify your Time Warner Cable/Spectrum coverage. The Motorola 16×4 AC1900 boasts an impressive connection speed of up to 686 megabytes per second, making it more than compatible with some of Time Warner’s business-level internet speeds. It is equipped with a DOCSIS 3.0 system as well, meaning that it simultaneously functions as a router and as a modem. The AC1900 is equipped with dual-band wi-fi on both 2.5 and 5.0 Ghz channels, as well as four 10/100/1000 gigabit ethernet ports. The AC1900 also comes with a built-in firewall, which is far more sophisticated and advanced than your average Windows firewall.

The Motorola 16×4 AC1900 is equipped with a Wireless Power Boost, which allows for the wireless signal to boost and become stronger; as mentioned above, the dual band network range allows for the 5.0 GHz frequency to really shine in terms of how flawless anything is. For example, you can stream a 4K movie on the same network, a file that is usually dozens of gigabytes, with absolutely no buffering. Unfortunately, there is a huge drawback in that the Motorola 16×4 AC1900 does not come equipped with a port that allows for voice to be hooked into the system, which is essential for a function where your caller ID will be displayed on your television from the cable box. The Motorola 16×4 is well worth the price of $177.94 (pulled from Amazon) since it functions as both a router and modem; the modem portion is pre-approved to work flawlessly with Time Warner Cable’s subsidiary, Spectrum. 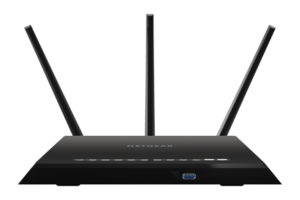 Part of Netgear’s Nighthawk line, the AC1900 is an absolutely stunning router/modem combination. Also equipped with a DOCSIS 3.0 system, the Netgear AC1900 can work simultaneously as both a router and modem, which can save you a ton of money on modem rental fees. The modem speed boasts an impressive 960 Mbps of bandwidth, meaning that a user can almost get gigabit speeds from Time Warner Cable/Spectrum. It is also capable of broadcasting dual-band on the 2.4 GHz and 5 GHz frequencies.

The Netgear AC1900 is also equipped with 8 powered ethernet slots at 10/100/1000 speed, which makes it the perfect hub to wire your home network on. There is also a built-in USB port that allows for people connected to the network to access media. As this is a Netgear product, it also comes with the proprietary Netgear Genie App, which makes installation and security a breeze; the Netgear Genie App comes loaded with many wizards for configuring your router in a specific way from your phone or desktop, or if you need to check on your security settings while away from your network. There is also a neat little feature that allows you to scan a QR code to connect to the network! The Netgear AC1900 is a little more expensive at $200 (price pulled from Amazon), but the price is worth it for this super powerful router. 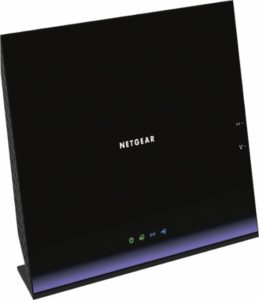 The Netgear AC1600 is the Netgear AC1900’s little brother, and the price tag reflects this; while the AC1900 will cost you upwards of $200, the AC1600 only costs around $130 (again from Amazon). For the large price decrease, you only lose a little bit of power; the Netgear AC1600 is not able to dual band like its big brother, but has impressive 680 Mbps bandwidth speed that is guaranteed to work with Time Warner Cable/Spectrum, as well as many other ISPs (interestingly enough, not Verizon, AT&T or CenturyLink.) The Netgear AC1600 is also equipped with a Docsis 3.0 cable modem, which again means that you can save a ton of money on modem rental fees.

The Netgear AC1600 is a little bit cheaper, but a little bit less powerful router than some of the other routers listed here. However, the price is actually very amicable; with the decreased price, that leaves a bit of money for other accessories. While the AC1600 does not come equipped with a USB port that is perfect for sharing media, other tools like a Netgear AC750 WiFi range extender (available for $40) will make your network much more powerful, reliable, and wider than a network powered by a Netgear AC1900. The AC1600 only has two 10/100/1000 ethernet ports, six less than its older brother model. It also comes equipped with proprietary Netgear Beamforming technology, which promises to make your streaming experience much more seamless. 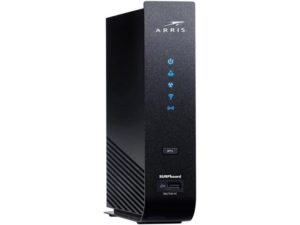 Nicknamed the “Arris Surfboard,” Arris might already be a brand that a few of you are familiar with. Most of the modems rented out from ISPs to their customers are actually Arris modems. The Arris SBG7580, also known as the Surfboard, is a very powerful little router/modem combo. Equipped with a DOCSIS 3.0 system, it simultaneously functions as both a router and modem – again, savings of upwards of $120 – $180 per year from not renting a router! The Surfboard comes in a few packages; it is available with a 1.4 Gbps speed, which costs $190, the 1.4 Gbps speed solely as a modem with no router (available at $105), and again as an all-in-one unit with 686 Mbps at $80.

All three of the Surfboard models come with a 2 year limited warranty, which is namely to cover any product defects or manufacturing problems. The more expensive model, which runs at 1.4 Gbps, comes equipped with dual band technology that can provide up to 1900 total Mbps. The dual band channels are broadcast on the 2.4 GHz and the 5 GHz frequencies. The modem portion works with Time Warner Cable/Spectrum and numerous other ISPs, although there are a few complaints that the router takes a bit of time to be recognized by the ISP. However, both units do come equipped with 4 10/100/1000 gigabit ethernet ports (needless to say, the modem-only unit comes with just two plugs) with no USB port. For those looking for a fast, secure wireless connection without many bells and whistles, the Surfboard might just be the perfect router for you. 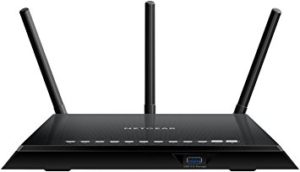 Returning to just routers, the Netgear AC1750 is also part of the Nighthawk series. However, since this unit is just a router, it can be considered the most significantly powerful item on this list. The AC1750 is equipped with dual band and can get the user upwards of 1750 Mbps total on their internet. Three specially shaped antennae sit on the back of the router, which is perfect for increasing the signal strength and coverage of your home network. The Netgear AC1750 comes with the proprietary Netgear Up app, which is mostly an install wizard that guides you through setting up your home network however you would like. It also is compatible with the Netgear Genie App. For those looking for a smart home experience, the AC1750 is natively compatible with Amazon Echo/Alexa, which allows for Alexa to perform network diagnostics and essentially “speak” with the router.

The Netgear AC1750 comes with a jaw-dropping 8 ethernet slots and 2 USB 3.0 slots, one of which is meant for media and the other of which is meant for backing up settings/files related to the AC1750’s operation. However, the AC1750 is definitely an enthusiast’s router and comes with all sorts of bells and whistles, including hosting more than a gigabit of bandwidth for a wired network. It also comes with the Beamforming technology, which promises that any streaming experience can be seamless without buffering. Unfortunately, this is just a router and does not include any DOCSIS technology, so renting a router from your ISP or purchasing one is still required. The AC1750 costs around $110, according to Amazon. 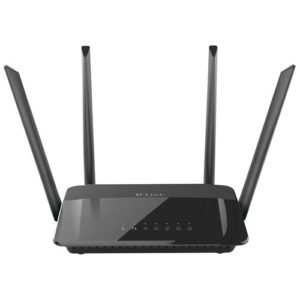 One last item on this list, and this item is more of the budget variant of any routers listed above. The D-link AC1200 is solely a router unit and does not come equipped with a modem or DOCSIS software. However, the AC1200 is incredibly versatile and comes in many variants, the cheapest of which starts at $40 (price from Amazon). For the $40 price, you receive a dual-band router that is capable of up to 1200 Mbps with 300 Mbps in the 2.4 GHz channel and 867 Mbps in the 5 GHz channel. The AC1200 is also equipped with 4 high-powered antennae, which gives it quite a surprising amount of range that can reach all the nooks and crannies in your house with at least 3 bars.

The AC1200 lacks any bells and whistles, and only comes equipped with 4 ethernet ports. However, for someone who is looking for a cheap router for their home, dorm, or whatever purpose, the D-Link AC1200 shouldn’t be discounted for its cheap price. If anything, it is proof that you can still get bang for your buck when trying to save a few bucks on your internet connectivity.