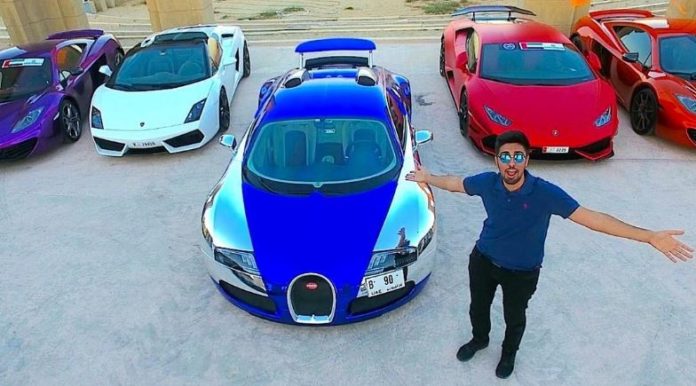 In a world where options for making a fortune were once incredibly limited, such limitations have now been shattered by the internet. Making money from sites like YouTube, Instagram, Facebook is becoming easier by the year. The top social media personalities can make millions of dollars annually, and even a moderately successful internet star can earn a comfortable living. Some of the most successful stars splurge on luxury items with their newfound internet riches. For many of them, a luxury car is one of their first purchases after a paycheck boost. Internet celeb cars often get people talking when they are posted online, whether the poster does so show off or to say thanks to their fans. 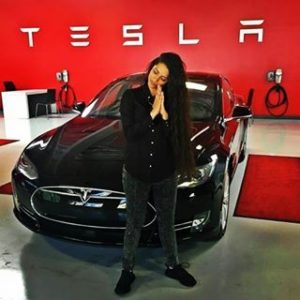 Lilly Singh is a Canadian vlogger, author, actress, and motivational speaker. She initially became famous for her humorous autobiographical videos about her Punjabi heritage, as well as her emotional vlogs. Singh’s relatable content quickly accumulated a dedicated fanbase. After barely a year of blogging, she had amassed several million subscribers and a net worth of $9 million.

Not all internet celeb cars have to be exquisite. Despite her massive fortune, Lilly Singh opted for something more practical rather than luxury. On April 15, 2016, Singh posted a vlog wherein she purchased a Tesla Model S – the then 27 year old star’s first car, in fact. The 100% electricity powered Tesla Model S retails for $70,000. It can drive 341 miles on a single charge. Its unique electric motor can produce anywhere from 2812 to 691 horsepower. It also has features such as autopilot, GPS, internet, and warmed leather seats. 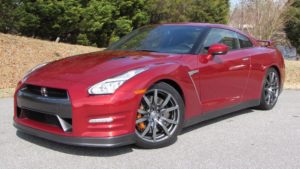 Roman atwood is an American YouTuber most famous for his vlogging and prank videos. He is one of the most viewed and subscribed personalities on YouTube. His prank videos alone have amassed 1.4 billion views. Ad revenue from those views could easily finance multiple supercars. Atwood has a net worth of $3.5 million. Due to their influence, internet celeb cars of influential people like are sometimes even given to them – Nissan surprised the vlogger in 2015 with an incredible gift.

Although Roman Atwood is known for being a prankster, his ride is no joke. He revealed a Nissan GT-R in a 2015 vlog. -The GT-R retails for approximately $110,000. It has a 3.8 liter supercharged V6 engine capable of producing 565 horsepower. The car has become more popular in recent years after a design overhaul of its body and interior in 2013. 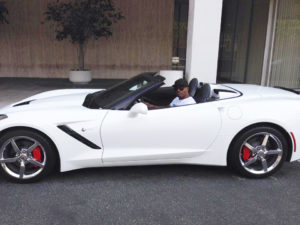 There may be plenty of beer-gutted middle aged millionaires who drive fast cars, but Simeon Panda will never be one of them. Simeon Panda is a fitness model and bodybuilder with a massive Instagram following. He also occasionally uploads vlogs and fitness videos on YouTube, where he has 320K subscribers. The fitness star has a net worth of $1 million.

Simeon Panda’s Corvette Stingray periodically makes appearances in his Instagram and YouTube uploads. Its retail price starts at $55,000. The Corvette Stingray’s 6.1L small block V8 engine can output as much as 455 horsepower, and it can accelerate to 60mph in 3.8 seconds. Fast and strong, the stingray is one of the internet celeb cars worthy of a bodybuilder. 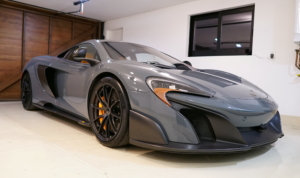 Some of the richest YouTube stars have made their millions from gaming. CaptainSparklez is one of the most popular gamers on the site, with 10 million subscribers. He has received much attention for his lavish purchases. However, even his recent purchase of a 4.5 million dollar Hollywood Hills mansion has done little to offset his net worth of over $15 million.

The McLaren 675LT retails for $350,000. With a max speed of 205mph and the ability to accelerate to 60mph in just three seconds, there’s no question it’s built for speed. Its speed comes from its aerodynamic design and its twin turbo V8 engine, capable of producing 666 horsepower. CaptainSparklez also owns a Bentley Continental and a Ferrari 458 Spider. 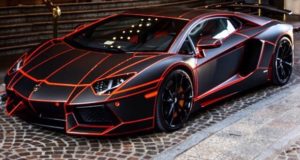 Rappers are known for showing off, and KSI is no exception. KSI is a British rapper, comedian, and vlogger. He got his start on YouTube making gaming videos, but began to produce music later in his career. After uploading several songs on YouTube, his already massive fan base grew even larger. One of his songs featuring rapper P Money is aptly named “Lamborghini”.

Lamborghinis are some of the most coveted internet celeb cars. KSI’s Lamborghini Aventador LP700 is decked out with a custom cyberpunk TRON wrap. The car retails for $400,000 and can reach speeds of up to 220 miles per hour. Its 6.5 liter V12 engine can produce 691 horsepower, one of the most powerful engines of any Lamborghini model. 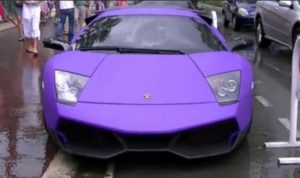 Disney Star turned Vine and YouTube sensation Jake Paul has received massive amounts of media attention for his antics, but he’s still one of the richest people on the internet. His Vine accumulated 5.3 million followers before the website was shut down. That following doubled on YouTube, where he now has 11 million subscribers. Jake Paul was previously paid a considerable amount for his role on Bizaardvark, but even that pales in comparison to his internet money.

Jake Paul’s Lamborghini Murcielago is decked out in a striking matte purple finish that suits his personality quite well. The car’s 6.2 liter V12 engine can produce as much as 661 horsepower. It can go 0-60 in just 2.8 seconds. Like other Lamborghini models, the Murcielago is a limited production vehicle – only 4,099 will ever be made. 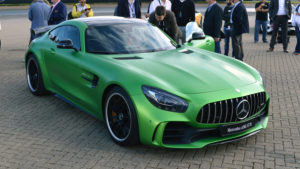 Shmee150 (real name Tim Burton) is a YouTube and Facebook star who attracted attention for posting videos and reviews of his massive car collection. Burton started an electronics business in London at a young age, and gradually amassed a large fortune. He used his wealth on his favorite things in the world, beautiful supercars – and quite a lot of them.
At the present moment, Mercedes AMG GT-R is the lastest addition to Shmee150’s collection. He also owns a McLaren 675LT Spider, Aston Martin Vantage GT8, and more. He will also have the latest Ford GT when it comes out in 2019. Shmee150 has an entire fleet of internet celeb cars that only gets bigger. 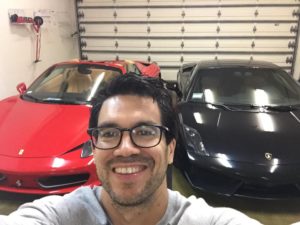 Enigmatic self-help guru broke the internet with an ad campaign that reached a record number of people in 2015, and has been a hot topic ever since. His infamous “Here In My Garage” video has been viewed by hundreds of millions of people. Lopez paid millions of dollars to advertise himself on various websites, and his ads can still be seen today. His Lamborghini Aventador was one of the main attention grabbers for his ad onslaught.

Other than his famous Aventador, Tai Lopez also owns a convertible Rolls Royce Phantom, a Ferrari 458 Spider, and a Lamborghini Gallardo. Lopez doesn’t keep his wealth all to himself, however. In 2016, Lopez gave away a pair of Chevy Camaros to two random winners to “pay it forward”. Two teens from Louisville, Kentucky won the cars. 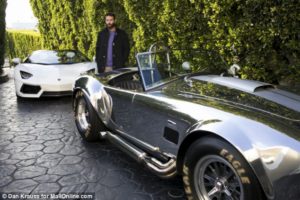 Internet celeb cars of people like Dan Bilzerian fuel people’s obsession with wealth and luxury. Bilzerian is one of the few rich people who is known just for being rich. His poker funded jet setter lifestyle has turned heads and resulted in him accumulating 22 million followers on Instagram. Every aspect of Bilzerian’s lifestyle is gratuitously luxurious, and his cars are no exception. The bearded playboy’s garage puts most millionaires life savings to shame.

Dan Bilzerian drives an impressive rotation of luxury vehicles on his Instagram profile. His most prized car is his 1965 AC Shelby Cobra 427, a legendary racecar from Ford that is nearly impossible to find – even if you can afford the seven figure price tag. Bilzerian’s collection also includes a Lamborghini Aventador, a Bentley Continental, and Brabus 6×6 AMG G63. His cars account for only a small fraction of his 150 million dollar net worth. 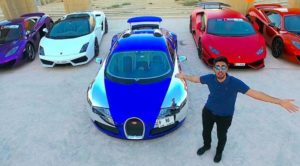 Mo Vlogs (real name Mohammad Beiraghdary) is an Emirati vlogger from Dubai. The son of a wealthy oil family, he become popular for videos showcasing his massive collection of luxury cars. The 22 year old vlogger has a garage with multiple vehicles most people work decades to own just one of. Mo’s videos often consist of exerpts of his daily life, possessions, and cars.

The Bugatti Veyron has long been considered the most prized supercar in the world. With a price tag of over 1 million dollars and a max speed of 250 miles per hour, it is the fastest and the most expensive car on the market. Mo also owns a Lamborghini Huracan, a Nissan GT-R, a Ferrari 458 Spider, and a Ford Mustang GT. He may have the largest collection internet celeb cars in the world!