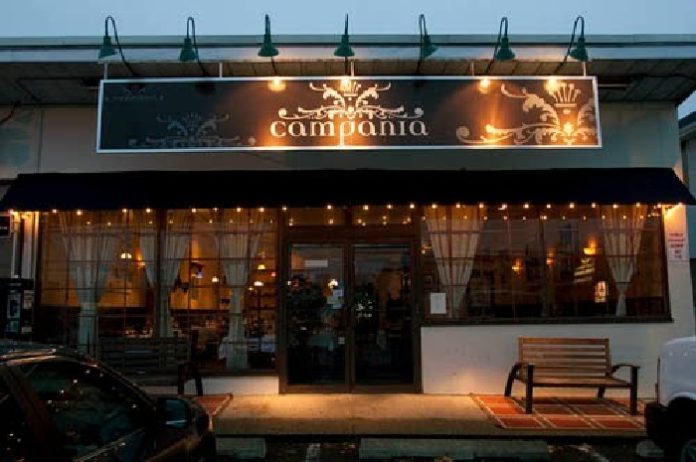 Campania in Fair Lawn, New Jersey called in the expert services of Gordon Ramsay to help them through their own Kitchen Nightmare in November 2008. Owner Joe Cerniglia had bought the place just 18 months previously but in that time he had already lost $180,000 and was $80,000 in debt when filming took place. The situation had become so critical that Joe was faced with having to close the restaurant for good.

With an almost empty restaurant, over-sized portions and an over abundance of staff Joe needed to streamline the business, but for Joe and his staff Campania was more than just a workplace, it was fun, they all got along and at least one waitress likened the kitchen to ‘a big romper-room’. Joe needed to get tough and take things more seriously, so who better to get to the root of Campania’s problems and make everything wonderful again than the most serious man to ever wave a spatula menacingly at a worried waiter. Gordon Ramsay may have had a few fights in his times, but at Campania, it was the customers who ended up fighting over the food, while Gordon himself stuck to throwing a few choice insults at the odd customer or two.

Gordon doesn’t criticize the exterior of Campania for once when he arrives at the place, but he’s less than impressed with its location at the side of a strip mall, ‘Hardly ideal’ is his first impression, but he seems at least moderately pleased with how it looks inside. Joe comes out front to meet Gordon where they seem to hit it off, although Gordon remarks on Joe’s finger pointing. ‘I’m Italian, I talk with my hands a lot’ explains Joe, but Gordon gives him a look that suggests he’s met every Italian on the face of the Earth, and none of them do it.

Joe retreats back into the kitchen where he can point his fingers in peace and Gordon orders tortellini soup, ravioli and chicken crusted with cranberry and pistachio. Gordon asks waitress Josette if the ‘Bland and tasteless’ tortellini is really home made, as claimed in the menu, she’s a clever girl and tries deflecting the question, but eventually Gordon narrows her down to ‘Home made in another location and sent here’. Gordon’s not happy, ‘Home-made is made on the premises and that’s it’, he says as if declaring a new eleventh commandment. The bitter taste of non home made tortellini is wiped from his delicate palate by what he considers to be literally bucket-loads of garlic in the ravioli. Head Chef Glen, a towering individual who seems far too happy to really be a chef thinks the ravioli is perfect, but then Ramsay does always react to a heavy presence of garlic in much the same way that Dracula would.

The chicken is Joe’s last chance to impress Gordon with his culinary offerings, but the chicken reminds Gordon of a ‘Bison’s tongue’. It’s too dry and sweet and after his meal Gordon calls not only the whole Campania experience ‘Boring’, but he remarks on how long he had to wait for his food, all the while listening to laughing and giggling coming from the kitchen. Already Joe, who believes his food is ‘Pure, wholesome and good’ is regretting his decision to invite Ramsay into his establishment, but he stops short of actually putting chains of garlic around the doorways to ward off the evil spirit. Gordon inspects the kitchen next, and for once he seems fairly satisfied by how clean it is. Instead Gordon is amazed by how much food is stored in the place, he and Joe get together with head chef Glen who explains that Joe goes mad if the restaurant runs out of anything, so therefore the stores are always bursting at the seams. Joe eventually sees Gordon’s point that he’s losing money with too much stock and sees the kitchen in ‘A new light’, but further angry confrontations with Gordon are not too far in his future.

First up Gordon tackles the party atmosphere about the place, far too many people are having far too much fun and Ramsay is there to put a stop to that kind of thing. There are too many serving staff, so Gordon tells Joe to send a couple of them home. ‘Playtimes over’ we’re told, and things are far more serious in the kitchen with Gordon running around in the restaurant issuing orders like the Emperor of eateries. Unfortunately things aren’t going well in the kitchen, the orders are stacking up and customers are waiting far too long. Josette reveals that ‘Waiting for three hours’ is what Campania is known for as we see one hungry diner ordering a pizza in desperation.

Goron and Joe later have a heated discussion about waiting times, inefficiency in the kitchen and the huge portions that Joe serves, which Gordon sees as the biggest waste of money as far as the business is concerned. Gordon later visits Joe’s wife Melissa to talk to her about Joe and Campania. She reveals that they have put everything into the business, and she and Joe’s Mom are both worried about his stress levels, but Joe’s following his dream and trying to keep everyone happy, rather than running Campania like a business.

Gordon introduces a brand new dish that Campania can become famous for, he shares his recipe for meatballs with Joe and Gene and they all go out with plenty of free samples of the new Campania’s meatballs – ‘New Jersey’s most Famous’, to drum up plenty of business. Gordon also scales down the portions on a new revamped menu so that customers are no longer taking half the food home with them, and equips the kitchen with smaller plates to go along with the new leaner menu. There’s a customary makeover for the restaurant, along with a new oven that actually works and when the restaurant relaunches with its new look the place is packed.

The kitchen at Campania runs smoothly and efficiently during the relaunch, although one customer seems determined to complain about her steak, which she calls ‘tough’. But Gordon isn’t having any of it, he tells her to stop complaining and even refers to her as an ‘Old bat’ in front of other customers. One other customer complains that her food tastes like Ragu, and Joe tries to deal with her, but fails to be assertive enough to resolve the problem. She ends up complaining about the food outside to other customers but another, far more satisfied customer, goes outside to argue with her. Both parties seem to have enjoyed plenty of the house wine however and soon the sparks are flying in the parking-lot, but the fortunate intervention of a passing police patrol puts a stop to the argument before it can get physical.

Gordon gives Joe a final inspirational talk about being professional when dealing with complaining customers and all the staff get together to symbolically smash the huge old plates in the kitchen. Ramsay leaves Campania satisfied that everyone is working together more professionally, and that Joe’s biggest problems with profitability have now been fixed, but unfortunately the story of Campania and Joe Cerniglia hasn’t got a particularly happy ending.

Campania Now in 2018 – The After Kitchen Nightmares Update

Campania was more successful after Gordon’s visit in 2008, Joe won Chef Central’s Bergen County Ultimate Chef Competition that year and came second the following year. The restaurant was far more successful than before but the financial problems facing Joe, and the debt he was already in were already serious by the time of Gordon’s visit, and too big to be fixed simply by serving smaller portions. Faced with ever increasing financial problems Joe sold the restaurant in September 2010 and eight days later committed suicide by jumping from the George Washington Bridge into the Hudson River. At one stage during filming Gordon had told Joe that his business was ‘Going down the Hudson River’, and the media made much of this, but Joe’s family were forthright in stating that Joe’s suicide had nothing to do with Kitchen Nightmares and that Gordon had been a great help in keeping the business going as long as it did. Ramsay paid tribute to Joe, calling him a ‘Brilliant chef’ who he had enjoyed working with greatly, and the media fell back on other rumors about Joe’s personal life that equally had nothing to do with his eventual decision to close the restaurant.

As for Campania itself, the restaurant finally closed its doors for good in January 2011 and was replaced by another Italian restaurant, Sage, which so far has managed to achieve a far greater measure of success, with almost all reviews of the place being positive and praising its varied selection.