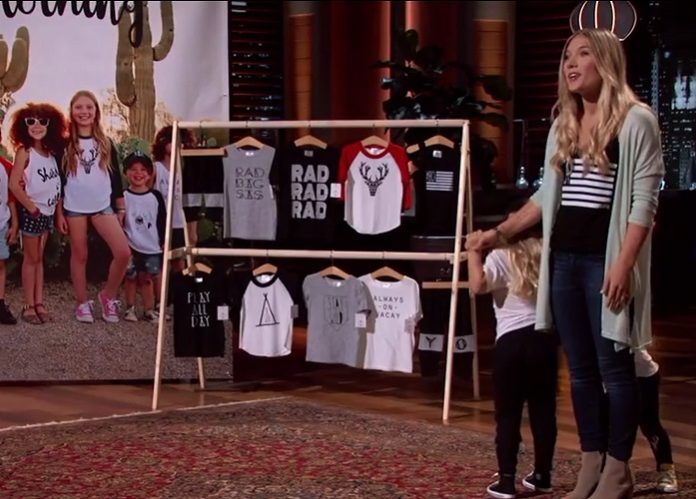 The founder of Sandilake Clothing Melissa Lay, from Portland, Oregon found herself in the Shark Tank in October 2016 to pitch her clothing line featuring original screen printed unisex designs for young children, and she also found herself learning an important lesson about the speed with which things can change when the Sharks are involved. In 2014 Melissa was a stay at home mom with two young daughters keeping her hands full, but after finding that all the clothes on offer for such young children were either pink and glittery for girls or blue and superhero themed for boys, she decided to create her own clothing line that had a more unisex style.

In 2015, thanks to an unscrupulous manufacturer that stole one of her designs, she managed to make quite an impression on social media, and some impressive sales figures too, all in her first year of business. After visiting her local Target store Melissa noticed one of her designs for sale, she hadn’t copyrighted the design but she decided to share the story on social media. The story spread online and eventually went viral, and after Melissa contacted Target they agreed to withdraw the product from their stores. The result was that Melissa was inundated with orders and she managed to sell over 20,000 tops, all created by hand at home. On the back of that success Melissa managed to team up with a manufacturer and set up her own website. The next logical step was for her to see if the sharks would take a bite of her business, and help her hit the big time in the cut throat and competitive clothing industry.

Melissa had not one, but two secret weapons when she went into the tank, in the adorable shape of her two young daughters, Scout and Penny. The kids were alarmingly cute, and there’s no doubt the sharks were won over with the little ones. Melissa announced she was hoping to find a shark partner to supply a $100,000 investment, in exchange for a 10% stake in the Sandilake Clothing business. She began her pitch by explaining about the exclusively masculine or feminine clothing for kids currently on offer, and her own unisex style that she hoped would bring something different to junior clothing retailers. Melissa wanted to get the Sandilake Clothing line into large retail clothing stores as it was more in line with contemporary attitudes and needs, and that’s where she needed the help of the sharks.

Next there were some samples for the sharks that were handed out by the two youngest members of the Lay family, and the Sharks were beaming all round, Mark Cuban even gave one of the little bundles of joy a high-five, but then it was down to business. Melissa sent her daughters out of the tank back to dad, and the sharks turned their attention to Melissa’s clothing range. First of all they admired the designs, all of which were original, well-designed and entirely created by Melissa. Mark Cuban then inquired what sales had been achieved so far, Melissa told the sharks that after only two years of business, total sales of $340,000 had been made.

Robert Herjavec wanted to know what the profit margin was on Melissa’s range of tops and shirts, and once again Melissa’s answer was fairly impressive. Her products cost only $5.50 to make, but they were sold on her company website for $22. Melissa then told the sharks about finding her designs in Target stores, and the online promotion that her business got as a result of the incident, but the sharks weren’t impressed, and it was her sales when she wasn’t making a viral splash that were the problem.

Kevin O’Leary in particular thought the sales of only $67,000 were ‘Nothing’, he told Melissa that the Target story that went viral had made her a star briefly, but now she was fading. ‘He’s saying you’re a one-hit wonder’ Mark Cuban said, and although he and most of the other sharks were laughing, it was clear that they saw Melissa’s business as a small fish in a big shark tank. Kevin was the first to reject Melissa’s pitch, he told her she was ‘Sandilake small everything’, and nothing more than a ‘cottage hobby’ business and with that Mr Wonderful was out.

‘That’s alright’ replied Melissa, in a strange matter-of-fact way, which raised another round of laughter from the sharks, but unfortunately Melissa wasn’t there to make them laugh, and none of them seemed likely to make a serious offer at that point. Mark Cuban asked how Melissa was marketing her products, and she mentioned promoting her business via social media, but again her answers pointed to a small-scale operation, and Mark looked uninterested. The Texan shark was next to drop out, citing the ‘Tough challenges’ facing Melissa if she wanted to grow her business in the future as his main objection.

Robert Herjavec complimented Melissa by telling her she was clearly a great designer, but after the spike of interest created by her momentary and accidental publicity, sales had dropped substantially, and that indicated to him that the Sandilake Clothing line was not attracting enough interest on it’s own merits, and because of that he too was dropping out of the negotiations. With three quick rejections and just the lady sharks left, it looked like Melissa would be leaving the tank without even one offer, but Barbara Corcoran had a surprise in store for the Sandilake entrepreneurial mom.

Barbara thought the Target story, and the sudden success for Sandilake caused by the incident was a ‘Lucky Charm’, and she believed Melissa was onto something. Barbara announced she did have an offer to make, which clearly surprised the other sharks and Melissa, who raised her eyebrows and remarked ‘Oh Wow’, but it wasn’t the deal that Melissa was looking for. Barbara would supply the $100,000, but only in exchange for 40% of the Sandilake business, and there was another condition too. Barbara wanted to sell half of her 40% stake to Grace & Lace, a ladies clothing company that Barbara had struck a deal with back in season five of Shark Tank.

Lace & Grace had over $8 million in sales since teaming up with Barbara back in 2013, and had made great progress in promoting the business on social media. It was that expertise online promotion expertise that was behind Barbara’s conditional offer, but she also told Melissa that she wanted an answer now. Melissa unfortunately wasn’t going to accept right away, the idea of giving such a large stake of her company away combined with 20% of it going to another clothing company concerned her. Barbara told her that Grace & Lace would be able to teach her marketing and help with the back-end operation of her company, but Melissa still looked doubtful.

Lori Greiner began to speak, but Barbara wanted to close  the deal there and then, she warned Melissa that the minute Lori made an offer, she would withdraw hers. It was a stressful moment for Melissa, and Lori, who hadn’t actually indicated that she would make an offer seemed less than pleased with Barbara’s strategy. Melissa told Barbara that she would like to hear Lori out, and Barbara showed that she wasn’t just putting pressure on to close the deal, without hesitation she told Melissa ‘I’m out’, and Melissa winced, but would Lori make her own offer or leave Melissa without a deal?

Lori certainly wasn’t happy with Barbara, she begrudged the way that all of Melissa’s hopes had been thrust on her, and briefly argued with Barbara, and even worse she confirmed that she didn’t have an offer to make. The Sandilake Clothing business wasn’t for her, but she also thought that Melissa would be better off doing things without the help of another clothing business, and on that point at least, Melissa seemed to be in complete agreement. Barbara told her that it was a classic case of ‘Curiosity killed the cat’, and with that Melissa left the Shark Tank without a deal.

Sandilake Clothing Now in 2018 – The After Shark Tank Update

After the show Melissa confirmed that a partnership with another clothing company was not a deal she would have been happy accepting anyway, she had wanted to attract a shark partner that believed in her, not someone who would involve her with another clothing business. Melissa may have left the tank without a deal, but she made it clear that she would never have accepted Barbara’s offer even if she had been given all the time in the World to think about it. Back in the tank Lori and Barbara were still of the verge of a frenzied argument about the way Barbara had ‘Put all the pressure’ onto Lori, and it fell to Mr Wonderful to smooth things out between his fellow sharks, ‘At the end of the day, she left the tank without a deal’ he remarked, with an air of finality.

Having looked at the Sandilake Clothing social media pages, it’s noticable that Melissa Lay isn’t repeating her one-time viral success online, even since her Shark Tank appearance. The company Twitter account has just over 400 followers, and even though the Sandilake Instagram account has a far more impressive 51,000 fans, most of the posts there are liked by only a hundred or so followers at the most. Melissa posts frequently about the latest designs, promotions such as her current $10 or less sale, and there are more pictures of cute kids in Sandilake shirts than anyone can go ‘Awww’ at in an evening, but there’s nothing that really makes Sandilake Clothing stand out from the thousands of other clothing companies that promote their wares online.

The company website at Sandilakeclothing.com is a similar story, it’s full of pictures, and has a blog and plenty of information about the company, but it fails somehow to really make a mark. There are 8,000 followers on the Facebook page, which is well stocked with recent posts about Sandilake products, and I asked for any information about sales and company news since the Shark Tank episode was first aired. Unfortunately I only received an automated response with a few spelling errors that told me that ‘Sometimes Facebook makes it a little tough to see messages’, and that was the only response I got. It seems that Melissa may be a fantastic designer, and perhaps she has found a lucrative and marketable niche in the multi-billion dollar childrens clothing industry that will one day turn her small operation into a business worth millions. But right now Sandilake still seems like a small-scale company, and I can’t help wondering where it would be now if she had jumped at the chance to team up with Barbara Corcoran, and taken the opportunity to avail herself of some much needed social media expertise from the multi-million selling Lace & Grace.