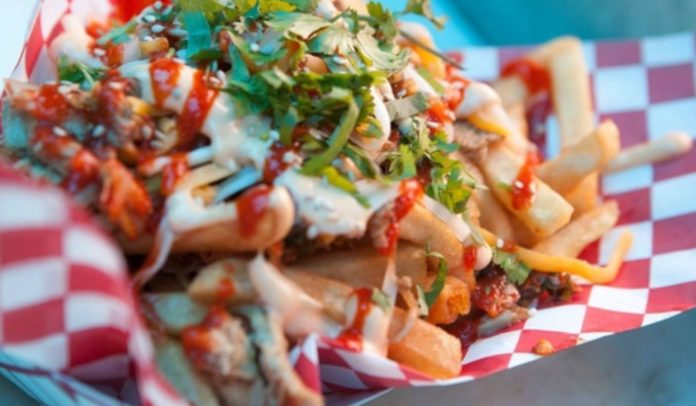 Jae Kim started off his presentation with his audition video. He said that he was born and raised in South Korea. When he was 11 years old, his mom decided to bring him and his sister to the United States for a new life. He said that Korean food is his passion, but when he graduated from college he didn’t have enough money to start a restaurant. Jae decided to start a food truck instead. It was so popular that they’ve grown into a fleet of fruit trucks and 3 restaurants. He said that Chi’lantro was serving Korean barbecue in a way that made it very accessible to most people. He said that he owed everything to his mom. She inspired his entrepreneurial spirit. He’d applied to Shark Tank about 4 years ago but had no luck. He applied a 2nd time after that but didn’t get in that time either. Now he had a fleet of food trucks and restaurants. He said that was his big opportunity and he didn’t want to blow it. 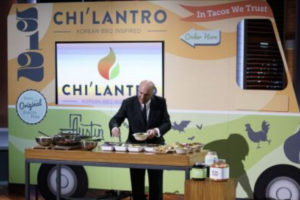 Jae Kim introduced himself to the sharks as the CEO and founder of Chi’lantro barbecue. He said that was great to finally be there. He asked the Sharks for $600,000 in exchange for 15% equity stake in his company. Jae said that it’s taken him a while to get in front of them. He explains the story of him applying twice, but finally succeeding on getting on the Shark Tank since he had a fleet of a bunch of food trucks and 3 fast casual restaurants that are all extremely successful. He was planning on opening 2 more. He addressed Chris Sacca specifically and asked him if he could make a Korean barbecue bowl with him. Chris got up and approached the stage saying that he didn’t have to ask him twice for Korean barbecue. There is an assortment of bowls with different bases and toppings in them on the stage, and Jay handed Chris an empty one. Chris decided to start with the carbs – either brown rice, white rice, or noodles.

Next, Jae led Chris to choose from a range of meats – Korean barbeque beef, soy glazed chicken, or spiced pork. Chris had Jae choose for him, and Jae chose the beef and added some fresh veggies along the way – lettuce, carrots, and purple cabbage. Next, Jae had the option of kimchi fries, which caused Mark Cuban’s ears to perk up. Jae finally handed the tray to Chris with the Chi’lantro signature sauces on the side, and Chris bragged that it paid to be the most handsome Shark.

Jae then handed out pre-made trays to the rest of the Sharks. They each thanked him in turn. Chris asked what the sauces were, and Jae answered that it was Chi’lantro magic sauce. Mark asked if what they were eating was calorie free, and Jae just stuttered. As Barbara took a bite from her bowl, Lori asked what they were eating. Jae explained that it was a Korean barbeque bowl with a side of their original kimchi fries. The whole thing was topped with Korean barbeque, caramelized kimchi, and Chi’lantro special magic sauce.

Lori asked where Jae was from, and he told the Sharks that he moved to America from Korea with his mother when his parents got divorced. He said that it was a difficult transition for the family, and he had to step up and help them out at an early age. He opened a coffee shop when he was just 21 years old. He worked there daily while paying his way through school. He said that the coffee shop eventually failed.

Lori asked him why he thought the business failed, and he said that he didn’t have a vision for it.  He just worked every day to pay the bills and didn’t think about the future. Eventually, he had to call it quits.  He said that he decided to do something different, and that really gave him inspiration. He started the business with $30,000 in savings and ended up maxing out all of his credit cards to live for six months. Mark Cuban even said that that really said something about his character. He was able to run a business, go to school, and still save $30,000.  He told Jae that he got many emails per day asking how they could raise or borrow money, and Mark always told them that the best way to do it was to save by cutting costs and busting their ass. He said that Jae was a perfect example of that.

Kevin O’Leary said that the food was excellent and he could see why it sold. He wanted to get into the numbers. Jae told him that they did $4.7 million in sales last year. Kevin asked him to break that down, and Jay explained that the food trucks do $400,000 in sales while the restaurants do $1 million to $1.5 million per unit. They’ve maximized their growth, but he needed more money to grow.

Chris Sacca told Jae that that was the best food he’s ever eaten, and he could understand why he was successful. Kevin asked if he was set to do $5 million the next year, and Jae said that he was. Kevin said that he’s actually live the American dream in every essence of it. Jae told the Sharks that he had tried his hardest. I’m sure that it was pretty gratifying to hear that after having tried and failed to get on the Shark Tank so many times.

Barbara asked how many restaurants and food trucks he eventually wanted to have, and Jae told her that he wanted to have 15 restaurants, each making $1 million in revenue. Chris said that he had invested in many different restaurants, but mostly in the beginning stages.  He told Jae that he was doing great, and the food was delicious.  But he didn’t say how Jae was helping to change the restaurant market, so he was out.

Kevin O’Leary’s stated that he has invested in restaurants in the past, and it hasn’t gone so well. It’s made him a little bit more skeptical when thinking about investing in a food business. He said that he wasn’t so interested in the restaurant part of his deal since if the location didn’t work, he couldn’t just move it, due to the lease and other obligations. He went out as well.

Mark Cuban said that Jae was a shining example for every entrepreneur. He stated that brains were a lot more valuable than cash. He said that the food was spectacular, and he loves the combination of the restaurant and the food truck business. Mark continued, stating that he just wasn’t a restaurant guy. In order to invest in the right, you had to be working there side-by-side with the restaurant owner. Mark also went out, stating that it wasn’t a good fit for him.

Lori said that she was a fan of Korean barbecue, and that was the best that she’d ever had. She just didn’t see it as a good investment for her. Lori was leery of the way that Jae was deciding to grow the business. She wanted him to have a better idea of what he wanted to do before he expanded. Doing the food trucks and the restaurants at the same time was a bad idea according to her. She decided to go out.

Kevin pointed out that four Sharks had gone out already. And he asked Barbara what she was planning on doing. She said that she had already invested in a restaurant called Tom and Chee who had started out with $1.2 million and 2 locations and had grown to $51 million in sales with her assistance. She said that she was the perfect partner because she saw all the struggles and challenges that the other restaurant had gone through.  Barbara stated that she had an offer and that she could be more aggressive with it since none of the other sharks were interested. Kevin said that if he saw her getting too greedy, he would come back in. She offered him $600,000 in exchange for 30% of his business, which was double his original ask. The other Sharks all made pained expressions.  Barbara said that she didn’t want him to judge her as just a financial partner. She was very savvy in the restaurant space. She had a good 3 to 5-year plan.

Barbara insisted that she could get him to where he wanted to be, which was the 15 restaurant locations worth $15-$20 million without too many mistakes. Jae thank her for the offer.  Jae told her that they were operating at a 15% profit margin which would allow Chi’Lantro to pay her back quickly. He thought that 30% equity was too much. He seems to not realize that no other Shark was interested.  Jae asked Barbara if she would be willing to come down to 20% equity in Chi’Lantro. Barbara eyed him for a tense minute before accepting the deal. She called him a straight shooter and went up to hug him. He lifted her up off the ground in his exuberance. He started to break down in front of the camera in the post interview, stating that he had to succeed for his mother and sister. Let’s see how he does after his Shark Tank episode airs.

Chi’lantro Now in 2018 – The After Shark Tank Update 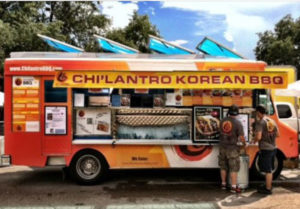 Chris Sacca has stated publically that he regrets not investing in Chi’lantro since the food made him “fat and happy.”  In May of 2017, the Korean food truck appeared on the University of Texas campus, and they donated all of their profits to the victims of the stabbing that occurred earlier that month. In November of 2017, Chi’lantro announced a new location, bringing the total number of restaurants to 6.