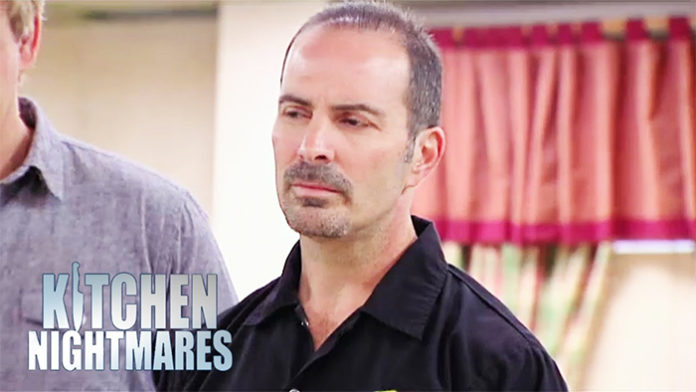 A Cajun/Creole restaurant in Metairie, Louisiana, Zeke’s offered a variety of dishes on their menu. Originally owned by a local icon named Zeke (hence the name), the business was bought by Ellen and Darryl Cortello following his untimely death in Hurricane Katrina. Much to the dismay of the original staff, the new owners soon replaced the entire staff. As if that wasn’t bad enough, they also chose to increase the prices (with a decrease in food quality), which over time, led the business to suffer. Wanting to save the company from losing, even more, money, the husband and wife team eventually sought the help of Gordan Ramsay on an episode of Kitchen Nightmares.

Walking into Zeke’s, Gordan Ramsay is immediately greeted by one of the owners with a smile. After learning more about the restaurant, which was apparently bought in an estate sale, the celebrity chef takes a minute to look at the menu. From there, he is soon introduced to one of the waitresses, who takes his first order-, the Oyster Cortello (named after the owners themselves). The second item that catches his attention is the boiled shrimp. Following that, Gordan asks the waitress for her recommendation on one of Zeke’s special dishes; she recommends the fried chicken steak as well as the traditional bread pudding.

With that, the kitchen gets to work at preparing his order. The first item that arrives at his table is the boiled shrimp. Gordan’s “first Louisiana shrimp”, his immediate reaction is that the seafood is mushy, and “hard to peel.” Despite the owner’s pride in the dish, the celebrity chef is obviously not impressed by the said appetizer. Wanting to learn more about the shrimp, Gordan asks the waitress whether or not they are fresh; to his dismay, she replies that they are “freshly frozen.”

Unimpressed, he waits for his next dish- while admiring the restaurant’s subpar decor. Before long, the Oysters Costello arrives. Despite being named after the owners, however, the Costello is “depressing” and “dreadful” according to Gordan. Next up, is the Chicken Fried Steak. Extremely bland, the chef’s dissatisfaction is immediately noticeable. Questioning the waitress on the quality of the food, she is quick to agree with him that the overall quality is low in the establishment.

Despite Gordan’s remarks, however, Darryl who works in the kitchen, claims that the food is great- that “he eats it himself.” Despite being irked by his criticism, the kitchen soon puts together his last dish, the Bread Pudding. While the comments that it “does not look fantastic,” the celebrity chef soon receives a pleasant surprise. While it is obvious that the presentation of the pudding could use some work, he compliments the taste, stating that “it’s delicious.” A pleasant surprise even for the waitress, she is happy to know that something finally agrees with his palate.

With his meal complete, Gordan finally makes his way into the kitchen. Upon being introduced to the staff, he wastes no time in letting them know that the lunch he had was “below standard.” When asked why the restaurant did not serve fresh shrimp, Darryl the owner replied that they did not have the time to go to the market- an answer that obviously did not resonate with the chef.  Next, he inquired about the cut of meat that he received for his fried chicken steak; confirming his suspicions, the staff answers with a simple “not a very good cut.”

Unhappy with his judgment, the owner goes on the defensive by stating that his customers are always satisfied with their food. Shaking his head, Gordan asks to speak with two of the kitchen staff alone. According to them, their concerns about the restaurant’s subpar ingredients have always fallen on deaf ears. In the interview, the kitchen manager Emil states that it’s only about “money, money, money” for the owners- an explanation for the eatery’s poor quality.

After gaining some insight from the two, Gordan is eager to find out how the restaurant functions during dinner service. In the kitchen, however, he quickly discovers something that stirs him up- bagged shrimp, that have been portioned the night before. Letting it go, for now, he refocuses his attention on what’s happening at the dinner tables. As expected from Louisiana, Zeke’s is quickly packed full. Unsurprisingly, however, a number of issues arise throughout the night- from food dishes sitting for too long, to customers being served week-old lasagna.

Calling a meeting after dinner service is over, Gordan voices his concerns with the two owners. To his dismay, they are still on the defensive. Realizing that they are still in denial about the state of the restaurant, the celebrity chef eventually calls a staff meeting the next day. A way to bring issues to the open, the employees take turns giving their opinions of the restaurant- most of which are negative.

Following that, Gordan tells two of the restaurant’s cooks to showcase their abilities to the owners. Sending them off to the local market for fresh ingredients, he awaits to see what they’ve managed to put together. To his pleasant surprise, the results are amazing. Plated beautifully, Gordan brings the two dishes out to the dining area- however, not before telling the staff to keep the fact that they made it, a secret. Instead, he would be telling the owners that he himself, had prepared the dishes.

Awed by the food, nothing but praise comes out of the owner’s mouths during the taste test. Ultimately, it wasn’t until after they had finished the dishes, that he revealed the true identity of the cooks responsible. An eye-opening experience, it offered them the ability to realize what his chefs were truly capable of.

With that, Gordan introduces a modern update to their menu; a few new dishes including fresh shrimp, crab, pecan crusted catfish, country fried steak, and blackened alligator. Grateful, the owners give the chef a big hug. Though they ran into some challenges during the subsequent dinner service, everything was settled without a hitch by the end of the night.

Zeke’s Now in 2018 – The After Kitchen Nightmares Update

In the weeks following Gordan’s visit, Zeke’s received a significant boost in both morale and customer numbers. For a period, their Yelp page was filled with nothing but positive reviews. At one point, the owners even hired a new executive chef, Michelle Matlock, who had plenty of culinary experience under her belt.

Despite that, the restaurant was eventually closed and sold in 2012. The last that we heard, Zeke’s former kitchen manager, Jason, worked as a head chef elsewhere.

As of 2017, the location of the former Zeke’s has become Porter & Luke’s, an eatery that offers both Creole and Italian classics. Judging by the number of positive reviews that they’ve received, the new restaurant appears to have easily surpassed Zeke’s in terms of success.