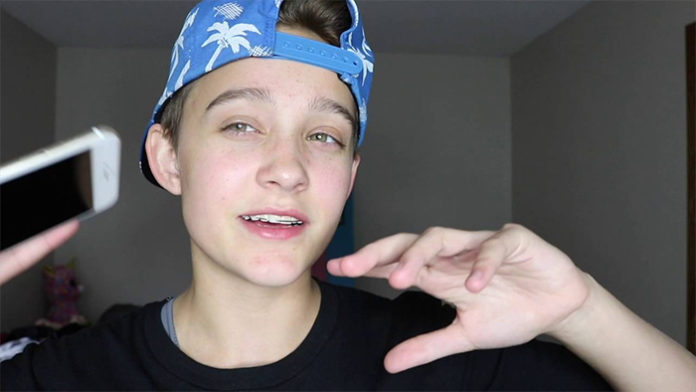 At just seventeen years old, Justin Blake has amassed himself a significant following on social media. Hailing from Minnesota, the transgender teen is perhaps best known on Musical.ly, where he has over 3.5 million subscribers. In addition to that, he has also made a name for himself on the live streaming platform, YouNow, over the past couple of years.

Since his rise to fame, Blake has also created a Youtube channel called Blake Boys, with whom he runs with his brother Danny, and close friend Damon. As of 2018, they have gained over 69,000 subscribers with more than 1.5 million combined views.

With the audience that he has, there’s no doubt that he is doing fairly well for himself- especially considering his age. Having said that, how much has he managed to bank from his online endeavors so far? How rich is the 17-year-old? From what we can gather, Justin Blake’s net worth is currently around $100,000. Wondering where he earned most of this from? So are we! Hopefully, we’ll be able to figure that out below.

How did Justin Blake Make His Money & Wealth?

Born on February 1, 2000, Justin Blake grew up with his two brothers, Danny, and Jacob in Minnesota. Having identified as a male ever since he was young, he eventually started to live as a guy, something that he was able to do with immense support from his family. From there, he eventually came out about his sexuality to those around him.

Like most teens, he decided to get involved with social media in the early 2010’s; one of the first platforms that he joined was the music network, musical.ly. Filling his account with numerous videos, it didn’t take long for him to reach one million followers on the app. From then until now, this amount has only tripled; as of 2018, he has more than 3.5 million fans on his account.

From there, he also made himself known on Instagram, and YouNow. Today, he has over 1.3 million followers on the photo-sharing app and more than 200,000 fans on the live-streaming platform.

Since his rise to fame, he has also joined Youtube, on which he currently has over 361,000 subscribers. Known for his vlogs, challenge videos, his channel has received more than 9.4 million views over the past two and a half years. If anything, this number will only continue to rise in the near future.

Given that he’s been monetizing his Youtube channel, Blake would have already pocketed a decent amount from his videos. Assuming that he makes $2 to $5 per 1,000 views, which is typical for a Google Partner, he would have received anywhere from $7,000 to $18,000 so far. As his following continues to rise with time, so will his revenue from Youtube.

In addition to that, he recently also created the channel Blake Boys, in collaboration with his twin brother Danny, and close friend Damon. Though not as popular as the main account per se, it has grown to have over 69,000 subscribers as of 2018.

While he isn’t married, he has been in a few relationships.

Openly gay, he has been dating fellow YouTuber Tyler Brown since 2017. Prior to that, he had been romantically involved with Raegan Beast.

Does Justin Blake Have Any Children?

Did Justin Blake Go to College?

Currently, still in high school, it’s unclear what his plans are following graduation.

What is Justin Blake Famous For?

Justin Blake is perhaps best known for his self-titled Youtube channel, on which he has over 361,000 subscribers. In addition to that, he is also famous on Musical.ly, Instagram, and YouNow.

Justin Blake currently resides in Minnesota with his parents and siblings. Photos of his house are unavailable at this time.

What Kind of Car Does Justin Blake’s Drive?

Unfortunately, this information is not available at this time.

How Much Money Did Justin Blake Earn Last Year?

For quite a while now, the teen has been uploading new videos to his main Youtube channel every Thursday. Be sure to subscribe to his page if you don’t want to miss out on his latest video additions!

While you’re at it, don’t forget to also follow him on other social media outlets! For instance, you can find the 17-year-old on Twitter at @JustinBlake or on Instagram at @JustinBlake. On Facebook, he even has an official fan page which you can visit here.