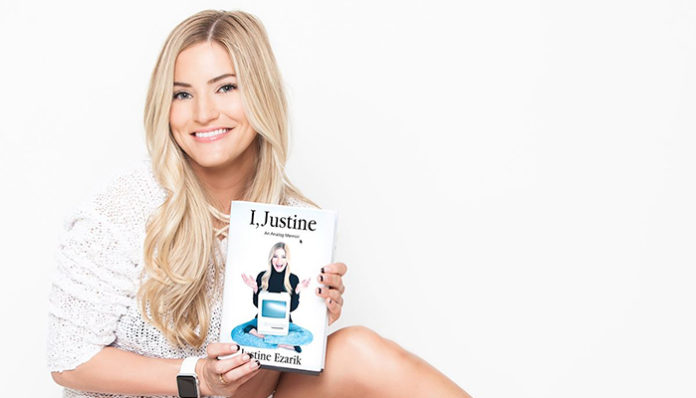 Hailing from Pennsylvania, Justine Ezarik is perhaps best known for her Youtube channel, which she had launched back in the mid to late 2000’s. Known by fans as IJustine, she gained widespread attention after creating and posting the “300-Page iPhone Bill” video to Youtube in 2007. Her earliest viral hit, it generated over 2 million views in just ten days.

Since then, she has continued to update her Youtube channel on a regular basis with vlogs, gaming videos, and more. As of February 2018, she has accrued over 4.4 million subscribers with more than 767 million views across her account.

But wait there’s more- aside from her online career, Justine has also appeared on television several times over the past few years. For instance, she made her acting debut in an episode of Law & Order: Special Victims Unit in 2009. Some of the other shows that she has made appearances in include Criminal Minds, The Bold and the Beautiful, The Vampire Diaries, and The High Fructose Adventures of Annoying Orange.

How wealthy is the Youtube star? According to sources, Justine Ezarik’s net worth currently stands at $2 million. How much of this came from her online videos? Let’s take a closer look below.

How did Justine Ezarik Make Her Money & Wealth?

Born on March 20, 1984, in Pittsburgh, Pennsylvania, Justine Ezarik grew up in Washington County with her two younger sisters, Jenna and Breanne. After graduating from Bentworth High School in 2002, she attended the Pittsburgh Technical Institute. Following that, she worked several video-editing and graphic design jobs before starting her business.

Ultimately it was in 2007, that she first made herself known on the Internet. Using a microphone and a wireless webcam, she started to broadcast her life online via Justin.tv. Not long afterward, Justine gained widespread attention for her 300-page iPhone Bill video, which was uploaded to Youtube. Centered around unexpected billing issues, the clip quickly went viral, with millions of views in just a few day’s time.

Today, she continues to update her Youtube channel, which is currently at 4.4 million subscribers. Not only does she use the platform for her vlogs, but she also uploads a variety of videos that feature cooking, video games, and various tech items. As of February 2018, her most popular video, a parody of Black Eyed Peas’ I Gotta Feeling has been viewed over 16.4 million times.

How much does the Youtube star make from her channel? According to sources, Justine earns upwards of $1,000 a day from ad revenue alone on the site; this works out to be over $440,000 a year.

On top of all that, she’s also made a name for herself as an actress. Over the years, the blonde has appeared in several TV series including Law & Order: Special Victims Unit, The Annoying Orange, The Vampire Diaries, Lauren, and Escape the Night, to name a few. In 2016, she also starred in the Youtube Red series, Escape the Night, where she played the part of The Gambler. Last year, she also lent her voice to some pigeons in the animated film, A Stork’s Journey.

Previously, she was in a relationship with Ryan Wyatt; it was later revealed that the two had broken up in 2015.

In the past, Justine had also dated Justin Fishner-Wolfson, and Brian Pokorny.

Does Justine Ezarik Have Any Children?

No, Justine Ezarik does not have any children.

Did Justine Ezarik Go to College?

Yes, she did. Justine was a former student at Pittsburgh Technical Institute; she graduated in 2012.

What is Justine Ezarik Famous For?

Justine Ezarik is best known for her Youtube Channel, which has accumulated over 760 million views to date. In 2007, she gained widespread attention for her 300-Page iPhone Bill video, which generated millions of views in just a few day’s time.

Justine Ezarik currently resides in Los Angeles, California. No other information is available at this time.

What Kind of Car Does Justine Ezarik Drive?

We do not have any information on  Justine Ezarik’s car.

How Much Money Did Justine Ezarik Earn Last Year?

At this time, we do not have any information on Justine Ezarik’s 2017 earnings.

Last year, she added a couple of acting credits to her name, including appearances in the film, A Stork’s Journey, and the TV short, Sugar Pine 7.