The Elephant Pants Before Shark Tank

Coming into the Shark Tank are two men, dressed in colorful elephant onesies. The two of them are escorting a human-sized paper mache elephant. Their business promises to help the animals that inspired their company. The Sharks’ attention is immediately caught by the gigantic elephant in the room, literally. Meet Nathan Coleman and James Brooks, the founders of Elephant Pants. They are from Brooklyn, New York, and have come seeking an investment of $500,000 in exchange for 10% of the company.

Nathan tells James to hit the Sharks with the motto and James simply says, “Save elephants. Feel good.” So, how do you save the elephants? By giving them pants to wear! Their mascot, Ellie, is wearing one of their newest styles. Nathan can see that some of the Sharks aren’t buying it, and he says that they’re just messing with the Sharks. They push back a gigantic screen to reveal several clothes racks full of pants and other African-inspired attire. After taking off their elephant onesies, the pair steps out wearing their Elephant Pants clothes.

This is their real business. They make the glorious pants that help save elephants, and those are their harem pants. They are actually the most comfortable pants in the world, and M.C. Hammer can’t touch them. They perform a quick shuffle around, emphasizing the points. They are looking for a Shark to join their herd and save elephants one leg at a time.

The Elephant Pants on Shark Tank

Nathan passes out samples to each of the Sharks, and the Sharks all start stretching the pants immediately. Lori then says that the pants are cute, and asks why elephants. Nathan then says they had always loved elephants as children, and they actually met in college. Nathan went over to Thailand in 2013 to go do typical tourist things, which included an elephant sanctuary. It was actually one of the places where elephants are beaten and in chains. When Nathan and his party arrived, the elephants were chained to the trees. This is no way for an elephant to live. Kevin asks what amount of the purchase goes back to the elephants, which is 10% of net profits. 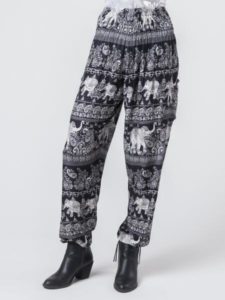 Mark then says that actually is not that much, but they have donated about $115,000 to the African Wildlife Foundation. Mark then asks the real question – who the hell wears those? Elephant Pants’s main demographic is 18 to 24-year-old females, they explain. Kevin then says that men wear those too, and he wants to tell a story. In the late 60s, Kevin’s family moved to Phnom Penh, Cambodia (the capital of Cambodia). They lived there for two years, and in those two years, Vietnamese fishing pants became a standard for him. They are worn by over 100 million men, and he is one of them. He has 40 pairs.

Daymond has to say that he has seen the pants, and they look horrible. Returning to focus, Robert asks about sales. So far, they have done about $7 million in sales over two years of business. The Sharks are all surprised at the number of sales. Lori asks what a pair of pants costs and Mark jokes that a pair sells for $6,999,999. The pants, in reality, retail for $24, and they net about $6 off each pair. 95% of sales come from their website, and 5% are in retail stores right now. Lori asks how they get people to go to their site. James explains that they have a diverse source of acquisition and retention, but Mark wants to hear more about that part since it’s the important part.

They do a lot of targeted Facebook campaigns, as well as a lot of “social grind.” Their Facebook has 230,000 followers, and their Instagram has 116,000 followers. They look at influencers and affiliate networks, as well. Robert asks about the scaling point – what makes it blow up? Lori says that the $7 million in sales is staggering. Returning to the story, James explains that every time they run a Facebook advertising campaign, they see strong sales growth. So they kept ramping it up because it worked. Mark asks about how much they spend on advertising, and James explains that last month, they sold $434,000 in product and spent about $75,000 on advertising. Mark looks exasperated.

Daymond asks what they want the $500,000 for. They intend to use that money to invest more in marketing, as well as a strategic value that the Sharks have. Robert starts by saying that he applauds them, as it is one of the best stories that they have ever seen. To get to $7 million is impressive. He admits that he has invested in stuff that he won’t necessarily use but he at least has to like the product. He does not see it with Elephant Pants, and he is the first Shark out of the deal. The idea is unbelievable to him. 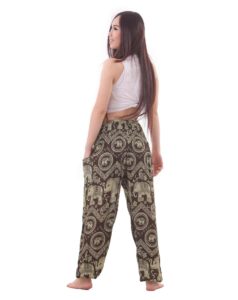 Mark then speaks up, starting by congratulating them. They took a cause, made it personal, and figured out their “secret sauce,” which is marketing. Mark essentially means that they have found what they are good at – in this case, marketing – and have used it to really grow their business. The challenge for him is that while Facebook giveth, it also taketh away. Facebook has made marketing companies millions, and with one policy change, those millions have disappeared. Because of that risk factor from Facebook, Mark is out of the deal.

Kevin says that he likes it and intends to make two offers, and they can choose between them. He is the most creative Shark in terms of structure and thinks the others can learn. So, his first offer is $500,000 as a line of credit at a 5% equity fee to set it up. The other offer is $500,000 for 20% equity, straight equity. He is the only Shark up there that actually wears that kind of pants and he would be their top model. Daymond laughs and says that Kevin is right. Daymond then makes an offer as well, proposing $500,000 for 20% equity.

James and Nathan have two offers, although Kevin has proposed two different types of offers. Lori then speaks up, saying that she hates cruelty to animals. She would go in with one of her fellow Sharks if they want to make her an offer to join in. Kevin then proposes two Sharks in the deal, with a line of credit at 12% interest rate, and give them 10% equity. They could then go to town marketing for them, using their Shark power. Kevin would actually allow himself to be photographed with the Elephant Pants on.

Daymond then speaks his mind, saying that the big problem is millennials do not want to see Kevin in those. However, Lori is in with Kevin on that deal. James and Nathan ask for all three Sharks to come in on the offer, proposing a 15% split three ways amongst Lori, Kevin and Daymond. This would be straight equity. Robert clarifies that they do not like the line of credit. They do not want to add another liability to their list of debts.

Daymond then says that Elephant Pants hits a space where he has lived for 25 years. He does not need the help of the other Sharks. Robert asks what the two would do for two of them, which would be $500,000 for 12% equity. Kevin asks if that will be enough for the headaches that Elephant Pants would cause. James and Nathan then ask if Daymond would be willing to do the $500,000 for 12%. He respects the counter offer and thinks that people always should counter, but he will stay firm at $500,000 for 17.5%. Robert points out that Daymond rarely comes back.

Lori then asks if this means that they are not countering her and Kevin. If they have no interest in dealing with them as a team, they can drop out and then James and Nathan have less leverage. They are in a really difficult place, but James says that they want to go one offer at a time. Daymond asks if this is too serious of a time for them to do the M.C. Hammer jig again, and they reply absolutely not. They do the dance, and Daymond laughs then he says he must be partners with them.

Robert then says whichever Shark they get has to do the dance. This is part of the deal. Daymond focuses up, then repeats his offer and adds on that he is willing to fund production. Lori and Kevin whisper to themselves, then Lori then says that the two of them are out. Daymond is the sole Shark remaining in the deal.

In the end, James and Nathan of Elephant Pants agree to go with Daymond for a partner. He invests $500,000 in exchange for 15% straight equity, and 2.5% advisory shares. Daymond also performs the M.C. Hammer sketch. James and Nathan are both beyond thrilled. They also get to save a lot more elephants, and elephants get to keep their own ivory.

Since partnering with Daymond, The Elephant Pants has grown into a way bigger clothing line. They are still aimed mostly towards women in the 18 to 24 demographic, but they have many more options now. This includes a brand new loungewear set, which comes in a kimono/lounge pants set. On top of that, they have also introduced a line of jewelry all in the shape of elephants.

The price of your average elephant pants item ranges from $20 up to $60 for a full set of clothing. There are many, many designs and patterns available. Elephant Pants has also introduced a line of clothing aimed at children and toddlers, which have quickly grabbed hold of the top 10 best selling items. As far as I can tell, there are no major retailer chains or businesses that carry Elephant Pants at a noteworthy amount of locations. They are typically found in stores on the west coast of the United States, although a few locations in the midwest do carry Elephant Pants. These are typically novelty locations, aimed at the similar 18-24 year old female demographic.

Since appearing on Shark Tank in the fall of 2017, Elephant Pants has donated an additional $30,000 to help to save the elephants. At the time of writing, they have donated $145,615. This can be found in a tracker from their website, https://www.theelephantpants.com/