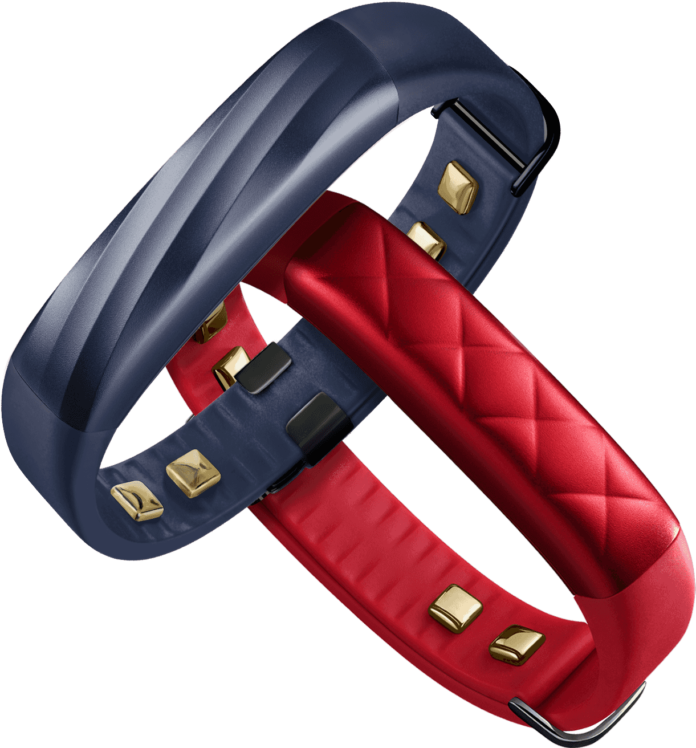 Jawbone is a major player in the wearable fitness industry, producing high quality Fitness products that compete with the likes of Misfit and FitBit. The Up series are the spearhead of their premium range of trackers, which compete directly with the Misfit Vapor, Fitbit Charge HR, and the Fitbit Ionic. The Jawbone Up 3 is the successor to the successful Jawbone Up 2, a great looking, though feature lacking band. The Jawbone Up 3 features a slightly different band design, and an all-new heart-rate sensor, giving you access to even more metrics from within the Up app. Interestingly, unlike many other trackers around it’s $179 price-tag, it lacks a screen, or any way to tell the time, or display your vital information, trading it for an astonishing 7 days of battery life. Let’s see how this approach stacks up against it’s competition.

Jawbone, unlike both Fitbit and Misfit, a very streamlined product range. With just two products to compete at their own markets, Jawbone has eliminated the chances of cannibalisation from it’s cheaper devices, since the price gap between the cheaper Up Move and the premium Up 3 is so large. The Up 3, therefore, is the most expensive tracker you can buy from Jawbone, one of two trackers. This means that it competes with the Fitbit Ionic, and the Misfit Vapor, both of which have large displays, and can act in a limited capability as smartwatches. However, unlike the smartwatches from Fitbit and Misfit, the Jawbone Up 3 has an extremely long 7 days of battery life. Oddly, the Jawbone Up Move, the cheaper device, actually has LEDs which can show you your progress towards your goals, as well as tell the time, much like the Misfit Shine.

The fact that the Up Move can tell the time and display limited info on your goal shows that Jawbone intended the Up 3 and Up Move to be bought by completely different people. While the Up Move lacks a heart rate sensor, it’s much cheaper, and it’s design is nowhere near as slick as the Up 3’s. This means that the Up 3 is very much a everyday wear fashion device, as well as a fitness tracker, and the Up Move is more for runners and the like. This distinction between the two trackers further reduces the risk of cannibalisation, even though they perform very similar functions.

The Jawbone Up 3 is one of the best looking trackers on the market today. Like the Misfit Shine, it’s has a minimalistic look, but also shows a bit of flair. For instance, the Jawbone Up 3 has a patterned top, with a total of two different patterns adorning the six different colour options. As mentioned earlier, the Jawbone Up 3 completely lacks a screen, or any form of communication from it and you. This means that it blends in perfectly as a bangle, without any distractions, such as a constantly flashing LED’s or a screen. The downside is that if you own one of these, and want to wear a watch, you’ll end up wearing two things on your wrist. In addition, the fact that it’s a bangle means that it doesn’t have the capability to transform into a clip, and there’s nearly no customisation options.

It seems, then, that the Jawbone Up 3 is a fashion device. No screen, no always-on LED’s and inklings that it might be a smart device – it’s nearly identical to a normal bangle, aside from the fact that it has a thick part at the top. On the inside of the band, you’ll see four metal prongs that look a bit like cosmetic bling. However, they’re actually the heart rate sensors, which work by measuring the current through your skin. This differs from that of the Apple Watch and many other trackers, which use a green light and light sensitive photodiodes to find your heart rate. Overall, the Jawbone Up 3 is a great looking device, albeit one with a serious lack of customisation options and functionality. Between the design of the Jawbone Up 3 and the similarly priced Fitbit Ionic, I’d choose the Fitbit Ionic for it’s increased utility.

The Jawbone Up 3 is at a serious lack of features. Usually, companies like Microsoft, try to cram in as many sensors and capabilities into their fitness trackers as possible. The Jawbone Up 3 goes the opposite way. It has a total of three functions from it’s sensors, which is your activity, your sleeping habits, and your heart rate. That’s it. Compare that with the Fitbit Ionic which does all three, as well as act as a pseudo-smartwatch which can show you your notifications, as well as tell the time. In fact, the Jawbone Up 3 has less features than it’s cheaper cousin, the Jawbone Up Move, which has the capability to show your progress throughout the day, as well as tell the time. It’s deeply disappointing that Jawbone’s premium Up 3 doesn’t have any capability to communicate to you whatsoever, except through the smartphone app.

Of course, it could be argued that the nature of the Jawbone Up 3 is that it is supposed to be as seamless as possible, and that giving it displays would decrease it’s stealthiness as a concealed tracker. However, the high price tag and lack of features simply don’t match up, even if it does boast a 7 day battery life and is beautifully designed. In fact, I’d argue that the Misfit Shine is better feature-wise, and that is only $20.

What the Jawbone Up 3 lacks in breadth it makes up for in it’s tracking, and it’s brilliant app. The Jawbone Up 3 is able to show you your steps, as well as your calories burned. It’s also able to track and recognise a wide variety of different sports, like tennis and running. This works well, and it’s nice to see how many calories you burned in a specific period. The Jawbone Up 3 also supports sleep tracking, using it’s accelerometer and heart rate sensor to determine when you’re sleeping and when you’re not as well as other metrics. Aside from that, there’s not much else that the Jawbone Up 3 does, but what it does do, it does well. Overall, I found the tracking to be excellent, and it definitely does it’s job well.

The Jawbone app is equally as good, with a starting screen which is both easy to understand and informative. It’s also quite encouraging, with healthy competition between you and your friends, as long as they also have Jawbone devices. Dig a little deeper in the app, and you get a plethora of different metrics, with calorie burn categorized into Resting and Active burn. You also get info on your sleep, with details on your Awake time, your Light Sleep, as well as your REM and Deep sleep. Everything is handily displayed on colourful graphs that really make you strive for better, much like the rings on Misfit’s app. From a design standpoint, Misfit still edges out the Up in terms of design – the Up app can feel a little too colourful and bright sometimes, with the Misfit’s UI more sophisticated.

Without a screen, the Jawbone Up 3 has an extremely long battery life. It manages to squeeze out 7 full days of battery life out of it’s tiny battery, which charges in just 60 minutes. In practice, this can go down to about five days, if you use the smart alarm feature, which buzzes you to wake up at the right time, according to your sleeping patterns.

While 7 days is impressive for a tracker, it’s not astonishing at all, considering it doesn’t have a screen, and many Fitbit devices have similar battery life with a small screen, like the Fitbit Charge HR with it’s bright OLED display. Charging the device, like many other small fitness trackers, is a bit fiddly. You have to clip the charger on the inside of the band, which is tiny. In addition, the cable is extremely short, with only a small LED to let you know you connected it correctly.

The Jawbone Up 3 doesn’t have a lot of features, and that extends to any extra features. The Jawbone Up 3 was originally touted as being fully waterproof, but problems with Jawbone’s production meant that in the end, they had to settle for water resistant, which is nowhere near the same level of protection. This means that you can’t track your swimming, and potentially even your jogs, if you like jogging or walking in torrential rain. Water resistance is standard on almost all trackers, so it’s no surprise that the jawbone Up 3 is at least somewhat water resistant. Overall, the Jawbone Up 3 doesn’t have a lot of extra features – like the sorely absent waterproofing.

The Jawbone Up 3 doesn’t have any customisation options at all. While it’s unfortunate that you aren’t able to bling up the Up 3, it also means that you won’t have to spend any extra money. In addition, the Jawbone Up 3 is already a relatively sleek device, so the look fits in with almost any attire, thanks to it’s sophisticated yet simple look. Unfortunately, this also means that you can’t change the color at all, so you’ll have to make your decision between the six colors at the time of purchase. Previously, you could buy custom bands for the Jawbone Up, but since the heart rate sensors are built into the band, everything is now one piece. This is bad news if you want to change the color, and even worse news if the band breaks.

The Jawbone Up 3 is reasonably comfortable with the band being soft and comfy, except for the heart rate prongs, which dig into your skin. This can’t be avoided, either, as the band must be worn tightly in order to achieve an accurate heart rate measurement.

The Up 3 doesn’t represent the best value for money, unfortunately. It’s extremely limited in it’s function, without any capability whatsoever as a smartwatch, but it is an extremely robust and accurate tracker. It looks great, but it’s about the same price as a Fitbit Charge, and does about half as much. Still, the app is excellent and so is the tracking, so it isn’t the worst value for money you could find. If you’re looking for the biggest bang for your buck, go for the Misfit Shine, a $20 pocket rocket.

The Jawbone Up 3 isn’t the best tracker around, nor the best smartwatch, nor the best value for money. However, what it does excel in is it’s ability to completely blend in with any clothing, and look inconspicuous as ever, whether in formal attire or sports clothes. It’s design is timeless, and it’s not intrusive, making it the ideal tracker for someone who doesn’t want to tell everyone they have a tracker.