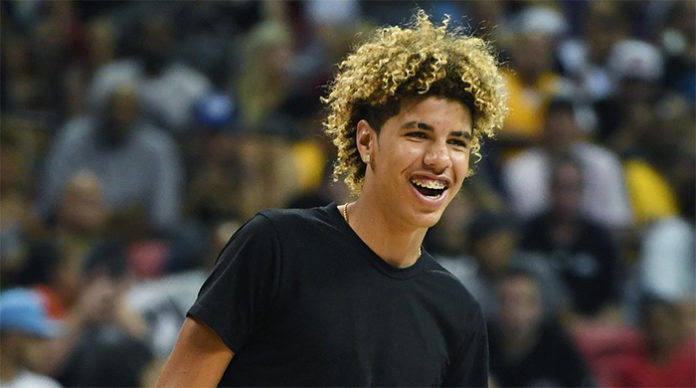 Hailing from California, LaMelo Ball recently launched his professional basketball career with the LKL in late 2017. Allegedly the youngest player to have ever signed such a contract, he currently plays as a member of Vytautas Prienai-Birstonas. Coached by his father LaVar Ball, he eventually made his debut on January 13, 2017.

Aside from his career on the court, LaMeLo is involved with a few projects including a sports apparel brand called Big Baller Brand and a reality series called, Ball in the Family, the latter of which premiered on Facebook in 2017. In addition to all that, he even released a debut single titled, Melo Ball 1 in 2017.

With all that the teen’s accomplished, surely he’s doing fairly well for himself financially? How rich is the professional basketball player? From what we can gather, LaMelo Ball’s net worth is currently around $700,000. Where were most of this money earned? What are the biggest moneymakers for the 16-year-old? Let’s dive in and take a look at some of these questions- be sure to stick with us!

How did LaMelo Ball Make His Money & Wealth?

Born on August 22, 2001, in Chino Hills, California, LaMelo Ball is the son of Tina and LaVar Ball, both of whom formerly played basketball in college. Alongside his two brothers, he first began to play the sport at the age of four. Noticeably talented, he often went up against opponents who were several years older than him during his early days.

A student at Chino Hills High School, he continued to play basketball while balancing his studies, under the guidance of coach Steve Baik. Over the past few years, he has helped his team to win several matches against San Bernardino High School, John Muir High School, and Sierra Canyon School.

Fast forward to late 2017 and it was announced that the 16-year-old had signed with Vytautas Prienai-Birstonas, a professional basketball club based in Prienai. The youngest American to have ever achieved such a feat, he eventually made his professional debut in a match against Lietkabelis on January 13, 2017.

Obviously, the future is bright for the basketball star. Aside from his career on the court, however, he’s involved with several other projects- for instance, he worked with his father on the launch of Big Baller Brand, a brand of sports apparel. In August 2017, a signature shoe called the Melo Ball 1 was released; it currently retails for $395.

In addition to that, he has also starred in the reality series, Ball in the Family. Premiered in September 2017, the show aired exclusively on Facebook. One of the web giant’s first video projects, it not only revolved around LaMelo, but his father, and two brothers as well. Most recently, a second season premiered in November 2017.

As far as other endeavors go, he has also come out with a single titled, Melo Ball 1 on September 8, 2017. Released in support of his signature shoe, it has since been played tens of thousands of times online.

No, he is not married. The last that we’d heard, he was in a relationship with Ashley Alvano.

Does LaMelo Ball Have Any Children?

No, LaMelo Ball does not have any children.

Did LaMelo Ball Go to College?

Still, in his mid-teens, LaMelo Ball still has a few years to go until he has to worry about college. Considering his dedication to basketball, there’s no doubt that he’ll be continuing to play following his graduation.

What is LaMelo Ball Famous For?

LaMelo Ball’s talents on the basketball court have garnered him much fame over the past few years. On top of that, his recent appearance in the reality series, Ball in the Family definitely also helped.

LaMelo Ball recently moved to Lithuania for his basketball career. Further details on his abode are not available

What Kind of Vehicle Does LaMelo Ball Drive?

How Much Money Did LaMelo Ball Make Last Year?

Information on LaMelo Ball’s salary is unknown at this time

As mentioned earlier, LaMelo Ball most recently appeared on the reality show, Ball in the Family in the fall of 2017. In terms of his basketball career, he currently plays for the Vytautas Prienai-Birstonas.

Interested in following the star athlete on social media? You can find LaMelo ball on a few platforms including Twitter at @Melod1p and Instagram at @Melo. If you’re a fan, don’t forget to also give him a like on his official Facebook fan page here.