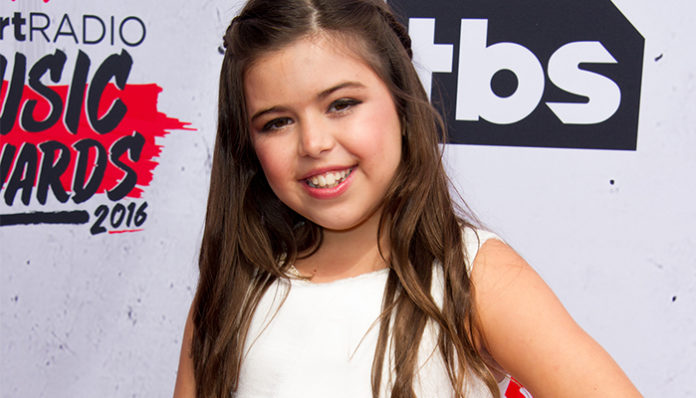 A talented singer, Sophia Grace Brownlee and her cousin, Rosie quickly gained popularity after their cover of Nicki Minaj’s Super Bass went viral on YouTube. Since then, the pair has released several singles including Best Friends, Hollywood, Why U Mad, and Girl in the Mirror. Incredibly popular, the teen herself has since amassed over 2.8 million subscribers on the site.

Over the past few years, the young brunette has been featured in several other shows including The Xtra Factor, Young Hollywood, Britain’s Got More Talent, The Toy Box, and Lorraine, to name a few. In fact, she has even appeared in the comedy series, Sam & Cat, starring Ariana Grande, and Jennette McCurdy.

With everything that she’s accomplished so far, how successful is the singer? How lucrative have her opportunities been so far? To put it bluntly, how rich is she? From what we can gather, Sophia Grace Brownlee’s current net worth is around $1.5 million. How much of this came from her singing career? Her YouTube videos? Let’s take a closer look at these questions down below.

How did Sophia Grace Brownlee Make Her Money & Wealth?

Born on April 18, 2003, in Essex, England, Sophia Grace Brownlee is the daughter of Carly and Dominic Brownlee. The older of two children, she has a younger sister named Belle, who is also active on social media.

As it’d happened, the young singer had risen to fame after her cover of Nicki Minaj’s Super Bass went viral on YouTube. A collaboration with her cousin Rosie, the video has since been viewed more than 53 million times. From there, the pair’s popularity took off completely after they were invited onto The Ellen Degeneres Show. An audience favorite, a series of regular appearances on the show over the next years ultimately kick-started their music career.

Since then, Sophia has gained more than 2.8 million subscribers on her personal YouTube channel, where she posts a combination of vlogs, tutorials, and more. To date, her most popular upload, the MV for her song, Girls Just Gotta Have Fun has been viewed over 192 million times.

How much has the young singer earned from said videos? Assuming that her payout from Google is at least $5 per 1,000 monetized views and that 40% of her total view count is monetized, her earnings from the site so far would be close to $1.3 million.

As far as her music career goes, the teen most recently released the single, Why U Mad on October 13, 2017. On YouTube, the official visuals have already been viewed over 5 million times.

Aside from her singing and YouTube careers, the brunette is also known for her various television appearances. Since her rise to fame on The Ellen Degeneres Show, the singer has also been invited onto Young Hollywood, Clever Now, Britain’s Got More Talent, The Toy Box, and Loose Women, to name a few.

In 2013, she and her cousin were even featured in the comedy TV series, Sam & Cat star Ariana Grande, Cameron Ocasio, and Jennette McCurdy.

No, the teen is not married. As far as we can tell, she is currently single.

Does Sophia Grace Brownlee Have Any Children?

Seeing as how she is still fourteen years old, the brunette has just recently begun high school. Graduation and college are still a few years away for her for now.

What is Sophia Grace Brownlee Famous For?

Sophia Grace Brownlee rose to fame alongside her cousin Rosie, after one of their cover songs went viral on YouTube. From there, they were invited onto The Ellen Degeneres Show several times, which boosted their popularity.

She currently lives with her family in Essex, England. Further information is not available.

What Kind of Vehicle Does Sophia Grace Brownlee Drive?

Sophia Grace Brownlee is currently too young to drive.

How Much Money Did Sophia Grace Brownlee Make Last Year?

Last year, the young singer released a couple of new songs including Why U Mad and Hollywood, both of which were well received by fans.

Want to follow the young star on social media? You can find her on a few sites including Twitter at @PrincessSGB and Instagram at @TheRealSophiaGrace. If you’re active on Facebook, you can also check out her official fan page here.