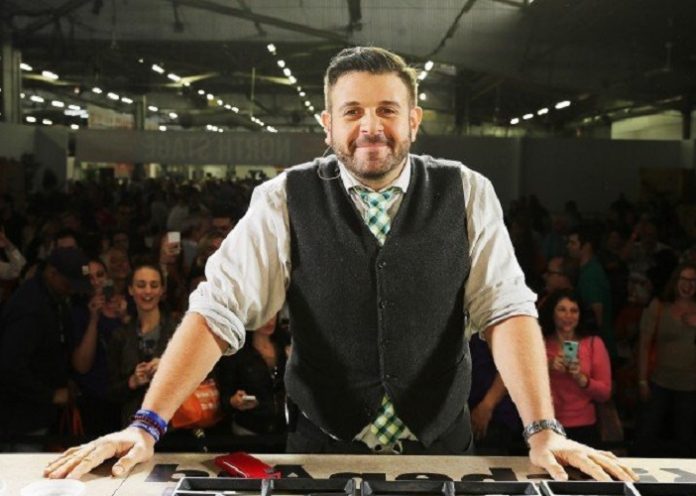 Food challenges have been around for a long time, but Adam Richman’s Man v. Food revived the popularity of competitive eating and made him an international star in the process. Adam Richman had appeared on our screens a few times before he became famous for his impressive eating abilities, but Man v. Food’s compelling format was a smash hit with Travel Channel viewers, and it has led to the big man from Brooklyn becoming one of the World’s most famous foodies.

But why did Adam officially retire from food challenges in 2012? Was it because he was suffering from health issues? And did he really become a vegan after retirement? Read on as we find out.

How Did Adam Richman make his money & wealth?

Adam Richman was born on May 16th, 1974 in Brooklyn, New York. He came from a Jewish family, and attended a Talmud Torah high school, before graduating from Midwood High School. He graduated from Emory University in Atlanta, Georgia with an undergraduate degree in International Studies, and later earned a masters degree at the Yale School of Drama.

Adam’s early acting career saw him win small guest roles on the soap operas ‘All My Children’ and ‘Guiding Light’, and he also appeared on ‘Joan of Arcadia’ and ‘Law & Order: Trial by Jury’, but his real passion was food. During that time he trained as a sushi chef and kept a personal journal of every restaurant he had visited since the mid-1990’s, and in 2008 the opportunity to audition for Man v. Food came along. Adam went through six rounds of auditions before he finally landed the job, and surprisingly there was very little eating involved, producers were more interested in seeing if Adam could talk about food, and that was something he excelled at.

Competitive eating enjoyed a surge in popularity around 2000, when ESPN began televising Nathan’s Hot Dog Eating Contest, which is held every July 4th at Coney Island, and Man v. Food proved to be an addictive mix of ingredients for viewers. The show premièred on December 3rd, 2008 on the Travel Channel, and Adam quickly became a household name as he traveled from city to city, sampling the specialty dishes of each location, and taking on that all-important challenge in every episode. 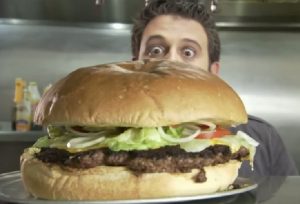 The show combined elements of fantasy along with the reality TV-style format. Adam would take on the persona of a character to psych himself up for his challenge, and each show would end with a fake press conference in the style of a sporting event. The recipe was a big success for the Travel Channel, Man V. Food received the highest ratings for any new show, and Adam’s likeability was a big part of that success. The show also received a considerable amount of criticism too, with several critics negative of the ‘Celebration of gluttony’, and even those who enjoyed the show admitted that the premise wasn’t healthy. Man v. Food was likened to a culinary version of ‘Jackass’, but it was generally agreed that Adam Richman was the secret spice that made the whole thing a tasty treat for fans of the show.

Adam consulted doctors before the show began, to work out the best health regime to follow between episodes, and he would keep to a reduced diet before challenges to minimize his weight gain, but he still piled on the pounds during his four years with the show. That was unavoidable sometimes, such as when he and 40 other competitive eaters tackled a 190-pound burger in Southgate, Michigan for a Guinness World Record attempt. That time the food won, with ‘only’ 160 pounds being consumed by those monster appetites within the two-hour time limit, but it wasn’t just huge quantities that Adam had to face on the show. Once he took on the comparatively easy feat of four small chicken wings in Sarasota, Florida, the only obstacle being that the chickens wings, called the ‘Fire in Your Hole’ wings, were generously covered in a mouth-melting mix of hot sauce, cayenne pepper, chili powder, garlic, red pepper flakes and ghost chili extract. Adam had 20 minutes to eat all four without drinking milk, and he managed to get through two of them before he was forced to beat a red-faced and teary-eyed retreat.

The success of Man v. Food was great for Adam’s earning potential however, he earned $35,000 per episode from the second season onward, a record for the travel channel, and his regular use of Zantac, an anti-heartburn product, during the show soon saw him signed up as a spokesman for the company. Adam also published a book in 2011, ‘America the Edible: A Hungry History from Sea to Dining Sea’, and the book has been praised as a well-written and consistently funny look at the culinary landscape of America.

Eventually, after three seasons of Man v. Food, Adam was considerably heavier than he had been before, and season four of the show, ‘Man v. Food Nation’ saw him coaching residents of various cities who would take on the food challenges themselves. In January 2012, in the middle of the season being aired, Adam announced he was officially retiring from competitive eating challenges. Rumors that Adam had been fired by the Travel Channel due to poor health circulated, followed by reports that Adam had now permanently become a vegan, but the truth was very different.

Adam Richman’s decision to leave the show was his, not the networks, and it was because he believed the spectacle that made Man v. Food popular in the first place was a diminishing one, and although he did briefly become a vegan, it was only for a few months in order to prepare for a charity sports event. Adam finally convinced fans that he was still an omnivore with a few social media posts showing him getting to grips with a cheeseburger or two, and since the show ended, he’s managed to lose over 60 pounds, and regain a far slimmer physique.

Adam has never been married, and he does keep his private life secret. In 2015 he was romantically linked to British singer Myleene Klass after they appeared as judges on a UK cooking show, and in May 2017 he posted a cryptic message on Instagram about his meeting with journalist Tamron Hall, in which he stated ‘Re-united and it feels so good’, which left many fans wondering if they were an item.

What is Adam Richman’s favorite food?

Of all the food he’s sampled, Adam’s number one favorite is peanut butter. He found giving it up the biggest challenge of all when he embarked on his three-month-long vegan diet, but the one thing he could never give up for good is meat. After rumors that Adam had become permanently vegan began to circulate, he posted the snap of him enjoying cheeseburgers with the caption ‘Meat Love’.

How Does Adam Richman stay in shape?

Adam keeps to a strict diet when he’s not working on a show and avoids sugary snacks, soft drinks, and coffee. He drinks at least eight pints of water a day in order to remain fully hydrated, and he’s also a fan of sports, most notably the Miami Dolphins and the New York Yankees, but the sport he’s most fervent about is a surprising one. 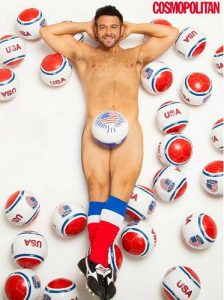 Adam is a huge fan of soccer, and he’s a big fan of English Premier League team Tottenham Hotspur. He has supported ‘Soccer Aid’, a British charity event that raises money for UNICEF, by pitting a team of English professional players and celebrities against a team from the rest of the World. In 2014 Adam was invited to play for the ‘Rest of the World’ team and managed to lose 66 pounds with that vegan diet in just three months. His efforts were well-rewarded, as The Rest of the World won by four goals to two. Adam’s team-mates on that occasion included actors Jeremy Renner, and Mark Salling, of Glee fame, but also Scottish celebrity chef Gordon Ramsay, who not only brought plenty of aggression to the team but was almost a professional soccer-player himself before he focused on food. The match raised over $5.5 million for UNICEF, and Adam ended up in such great shape after the training regime that he even posed nude for cosmopolitan, with only a smile and a strategically placed soccer-ball to show off his remarkable transformation. You can keep up to date with Adam on Instagram, where 237,000 food fans follow his latest exploits.