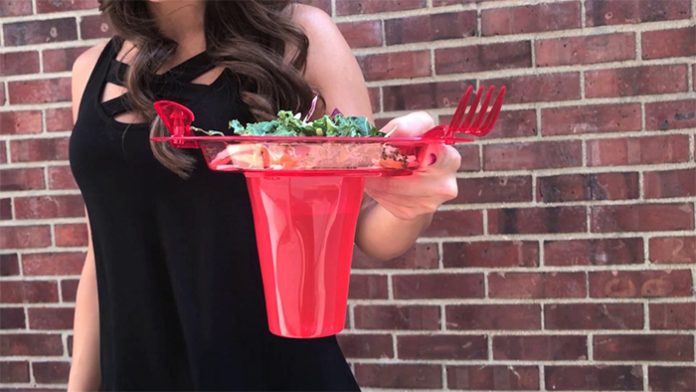 A line of flatware, iFork is unique in that its innovative design prevents the utensils from ever touching the table. Not only does this help to keep tables and counters clean from food residue, but it also helps to prevent the spread of surface germs, according to their website. To make things even more convenient, the line of forks, spoons, and knives also utilize an interlocking system that allows for everything to be put together and carried with one hand.

The brainchild of Kyle Donovan, the founder of NV Magazine, the innovative line of tableware was first released in 2014. According to an interview with the inventor himself, he had come up with the idea of being put off by the fact that his utensils were touching the table while eating out one night. Determined to create something more hygienic, he set off to work on what would eventually become iFork.

However, there was one problem—he did not know much about the plastic molding process, nor was he versed in production or marketing. In the end, a lot of research was done before the project could move forward. After many hours of hard work, he successfully put together the iFork—a specially designed fork that keeps food off of table surfaces.

By 2015, Kyle had begun to work on two sister products, the iCup and iPlate. In attempts to gain more funding, he launched a Kickstarter on June 29, 2015. Unfortunately, however, he was unable to meet his goal of $10,000 by the time it ended a few months later. Nonetheless, he pushed on. In the end, his hard work ultimately paid off—within a few month’s time, his products had started to draw the public’s attention.

Fast forward a couple of years, and it was announced that Kyle would be presenting the products to the sharks on ABC’s Shark Tank. The episode later aired on January 7, 2018. 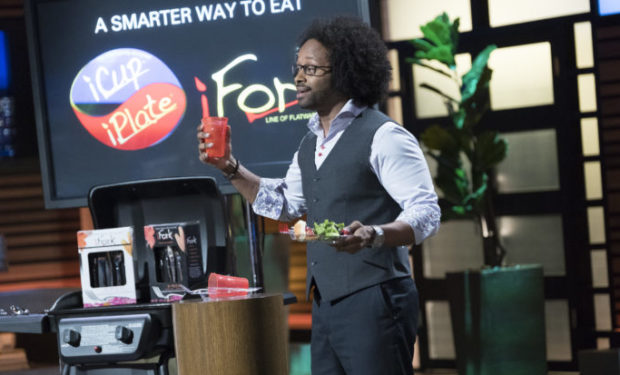 The first entrepreneur to be featured in the episode, Kyle walks into the tank with a cup of water in one hand and a plate of food in the other. Introducing himself to the sharks with a smile, he lets them know he is seeking $100,000 for a 5% stake of his company, iFork.

Jumping into his pitch, the inventor comments on how it can be a hassle having to deal with a full plate of food, and a drink in both hands. As he continues to demonstrate with the cup and plate in his hands, he makes it obvious that it’s easy to accidentally drop the utensils amidst an event.

As the camera pans towards his set-up, Kyle explains that he has a solution to that problem—an all in one, innovative interlocking system that is “designed to make your life easier”. Almost immediately afterward, he wows the sharks by sliding and locking his cup underneath the plate. Continuing, he shows that the forks and knives also stay in place on the plate.

“A massive improvement over traditional flatware”, he goes on to reveals that each of the utensils come with an innovative notch at the back, which prevents it from touching the table. As he says that, a clear diagram can be seen on the television screen. Noting that it’s nasty to eat food directly off a surface, he questions why anyone would want to do the same with a fork that has been sitting on a table. Finishing up his demo, Kyle begins to show off a few dance moves, all while holding the interlocking cup and plate system in one hand, which earns some laughs from the sharks. 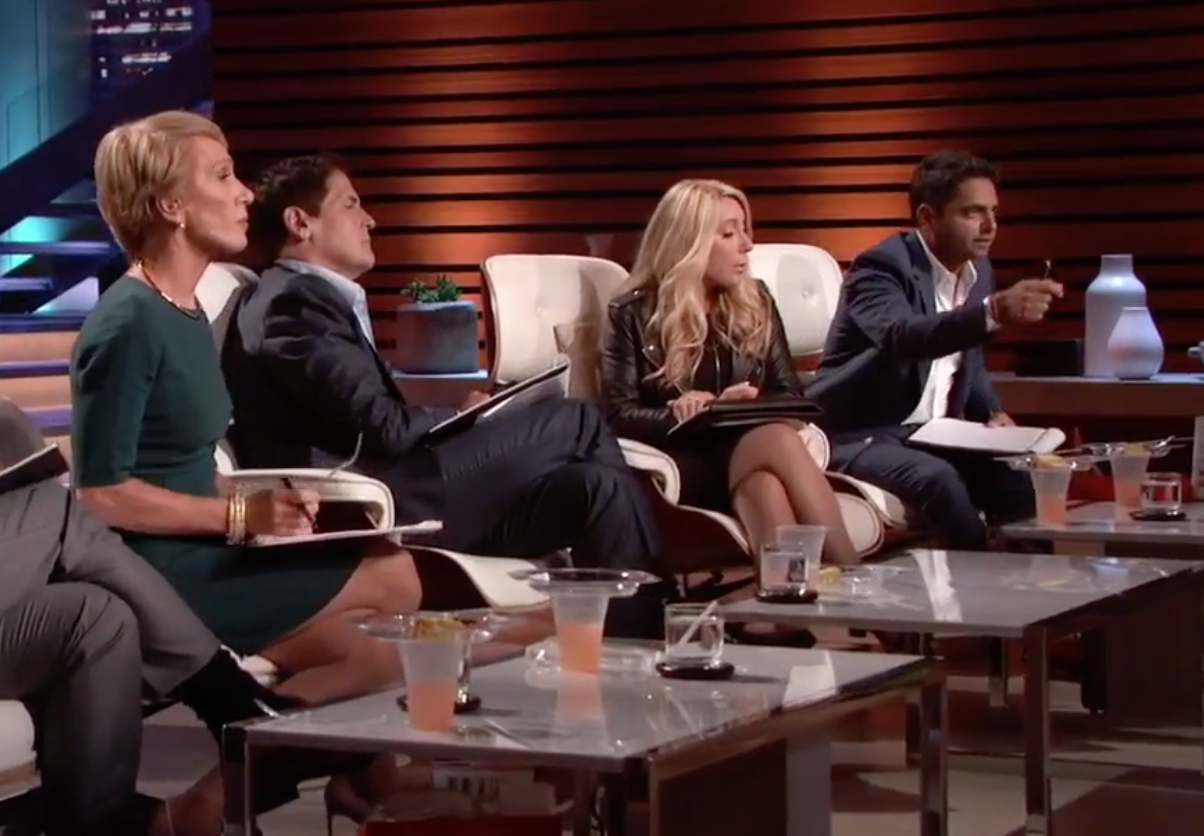 Upon receiving a round of applause, Kyle offers to pass out some samples. Walking towards the panel, he offers each of the sharks their own snack, which is contained in their own interlocking tableware. Answering a few questions (mainly on how to slide the utensils back), he eventually tells them that while there is a three-minute learning curve, it’s easy to get the hang of afterward.

As they continue to fiddle with the tableware, Rohan asks whether or not Kyle has a patent on the product. With a yes from the inventor, the camera begins to zoom in on a few of the certificates, which are displayed on a table. Noting that there’s a lot of them, Lori wonders asks whether or not he has a utility patent, to which he tells her that it is currently pending.

Elaborating a bit, Kyle tells them that he had decided to get a few design patents after “being blessed with a 500-store test” with Walmart—a statement which seems to impress the sharks. From there, he is asked to talk more about himself by Barbara. Replying, he reveals that he grew up without a mother or father in his life in the projects of Brooklyn. Continuing, he states that he’s been an entrepreneur all of his life. Revealing more details, he tells them that he opened up his own photo studio, just four years after working his first job at a photo lab.

From there, he says, he launched a magazine, which eventually became the second largest urban business magazine in the U.S. As the sharks continue to listen, Kyle reveals that Daymond from the show had actually been featured on one of the covers. With that, Robert asks whether or not the publication is still active, to which he tells them that it is currently being run by someone else as he focuses on his line of flatware. 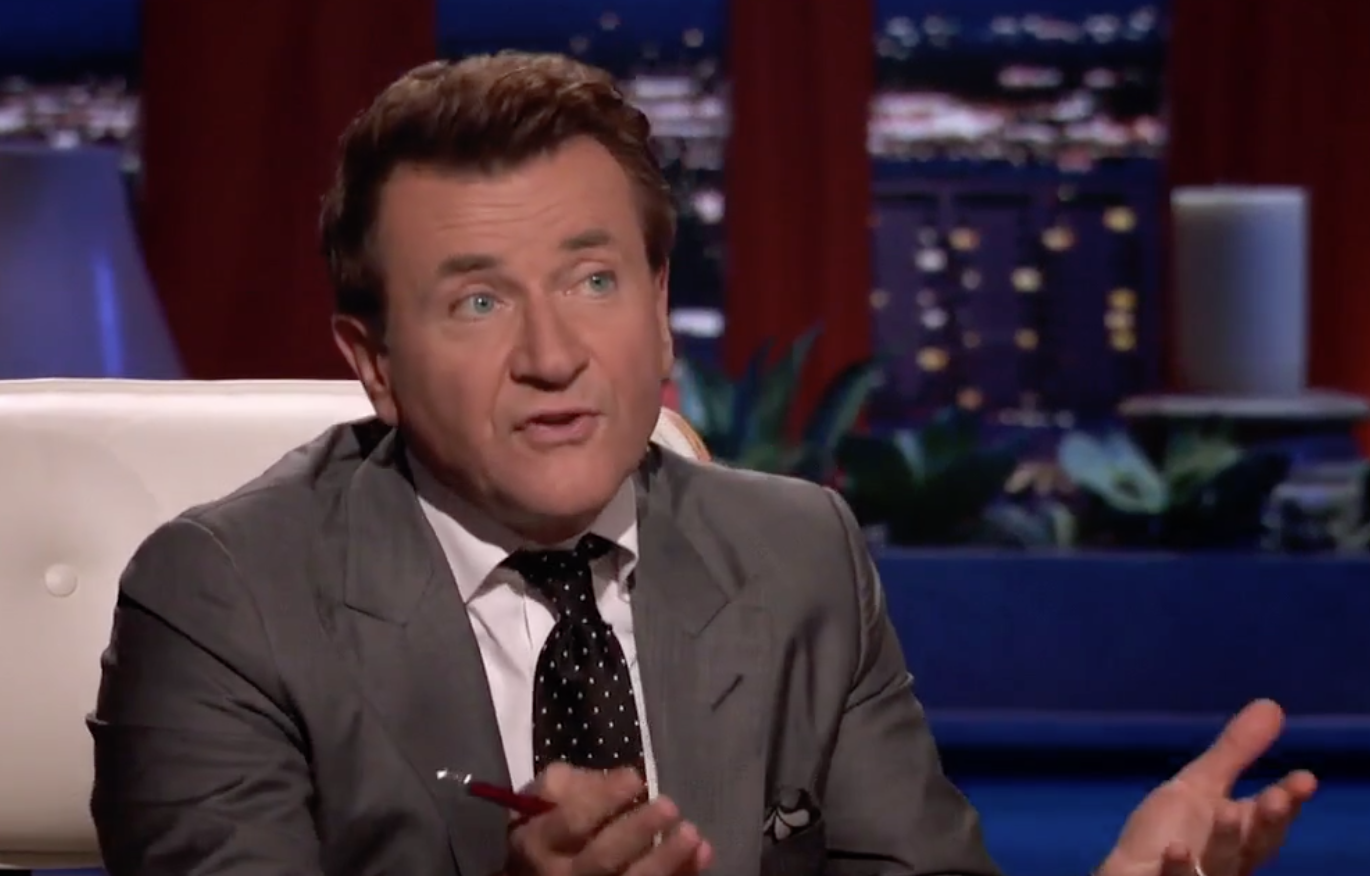 Asked how he got from a magazine business to cutlery, Kyle explains that he has always been bothered by the fact that his utensils were touching the table at restaurants. Seconds later, Robert prompts him to talk about his “Walmart story”. Commenting that it was for 500 stores, the inventor reveals that the deal had involved 18,000 units—before the iCup and iPlate came to be.

Upon further prompting, Kyle states that he sold $25,000 worth through Walmart, which unfortunately wasn’t enough for them to reorder the product. Asked how it did at the retailer, he says that most had sold out within two weeks.

With that, Rohan remarks that the problem he is solving with the iFork products isn’t actually about the fork touching the table, but instead “the one where you actually want to put a drink and eat”—a statement that Robert quickly agrees to. Nodding in acknowledgment, Kyle looks on as Rohan asks more questions about the interlocking cups and plates.

Asked what the price of a set is, Kyle, states that he hopes to sell them at retail for $15.99. While the sharks agree that that is a fair price point, Mark notes that is one challenge—that he’d have to demonstrate the value to customers, for them to want to buy the product.

Seconds later, Barbara offers the inventor his first offer—$100,000 for 20% stake, mainly due to the fact that it’s still a “relatively young business.” With that, she comments that it could be big if he can design something that can “interlock” with any cup, something that most of the other sharks agree with.

Soon afterward, Mark begins to talk. While he admits that he is close to succeeding with the products, he tells him that he will be dropping out. From there, the attention goes to Lori, who states that the items’ marketing can be tricky. “Difficult for consumers to understand what it is” she soon also drops out. Almost immediately afterward, Rohan also backs out, leaving just two sharks.

Commenting that Barbara’s a great partner to work with, Robert eventually also drops out.  With that, Kyle is back to considering his only offer. While appreciative of what she’s offering, he asks whether or not it’s possible for her to “come down a bit on the equity”, to which she replies it’s difficult as her products “have no proven traction.” 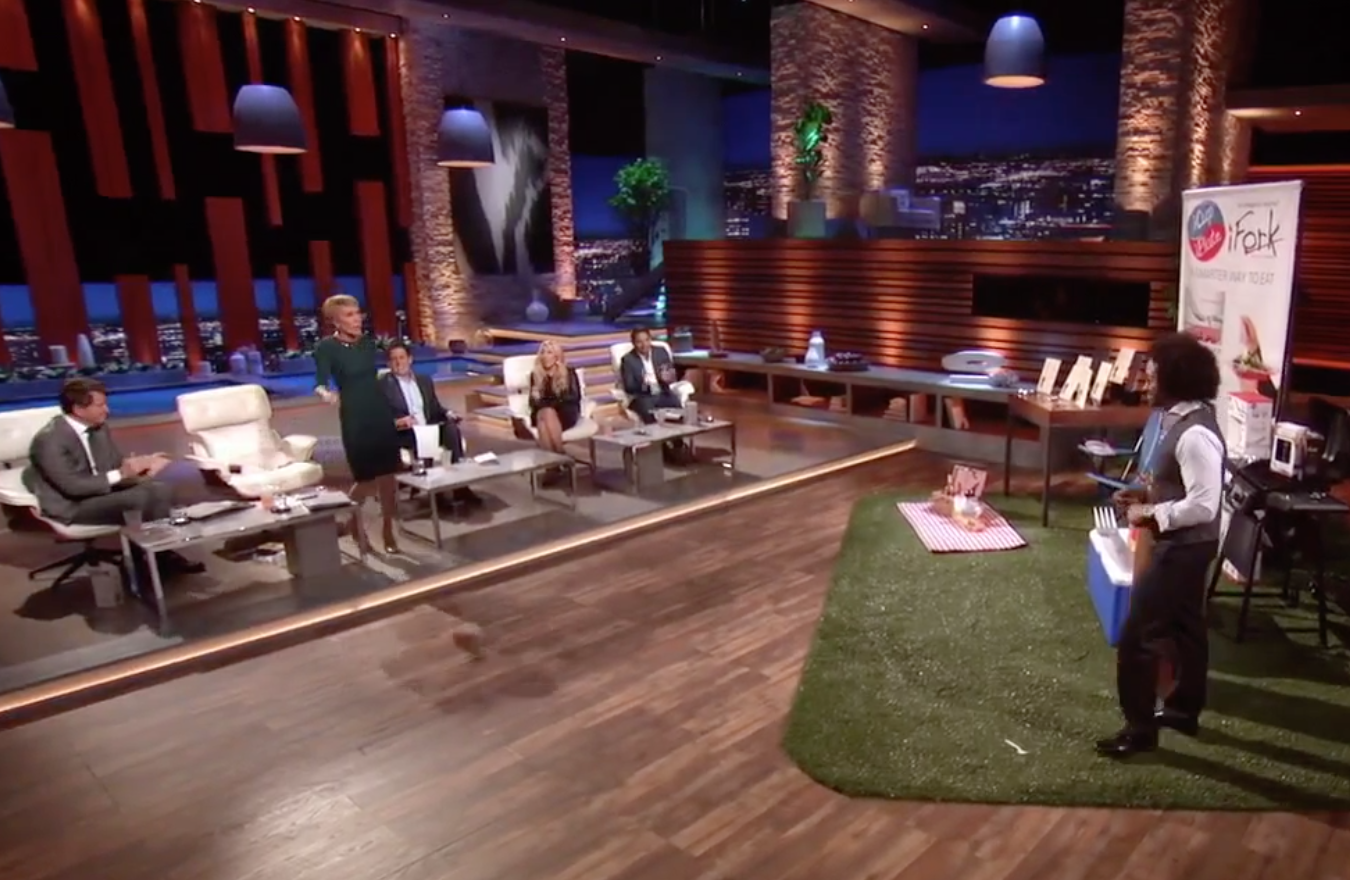 Nonetheless, he tries his luck again with a counteroffer—$100,000 for 15%. To his surprise, however, she soon agrees. With that, a wave of congratulations can be heard from the rest of the sharks. After coming together for a brief hug with Barbara, Kyle eventually walks out of the tank.

As his voice wavers in the subsequent interview, the inventor states that he is very happy to have the opportunity to work with Barbara, as it “is nothing short of amazing.”A bit emotional, he eventually turns his back towards the camera as his segment on the show ends.

Many months have passed since Kyle walked away with a $100,000 investment from Barbara on the ninth season of Shark Tank. How is his company doing nowadays?

A few weeks after being on the show, Kyle officially launched the cup and plate combo—the iCup and iPlate. As demonstrated on Shark Tank, the former easily locks in place under the plate, which allows for convenient eating and drinking. Made from BPA-free, recyclable plastic, an eight-pack currently sells for $20. Interested? You can grab a pack on their official website here.

What Customers Think About the Project

Since then, the iFork products have also been made available for purchase on Amazon. As of July 2018, the 32-piece combo box sells for $24.98. Considering the fact that the item is still relatively new, it’s not all too surprising that there are only a few reviews on the site. More specifically, it currently has a 2.9-star rating out of eight reviews. Taking a closer look at them, it would appear that while some customers are satisfied with the products’ convenience, others have run into some issues mainly with the plastic material being too “flimsy.”

While that may be true on Amazon, however, the iFork product line seems to have earned higher ratings on Facebook. More specifically, it currently has a 4.9-star rating out of 20 reviews. With that said, most ratings are not accompanied with any comments, which poses the question of whether or not the reviews are authentic.

Over the past several months, the company’s web presence has grown noticeably. For instance, they have amassed nearly 1,000 followers on their Instagram account @icupiplateifork. Of course, they can also be found on Facebook, as well as Twitter.

Will Kyle Donovan be returning to television for an iFork update on Shark Tank anytime in the near future? Unfortunately for us fans, nothing has been announced as of yet. One thing’s for sure though, there’s no question that he’s kept busy with all that’s been going on with the company!