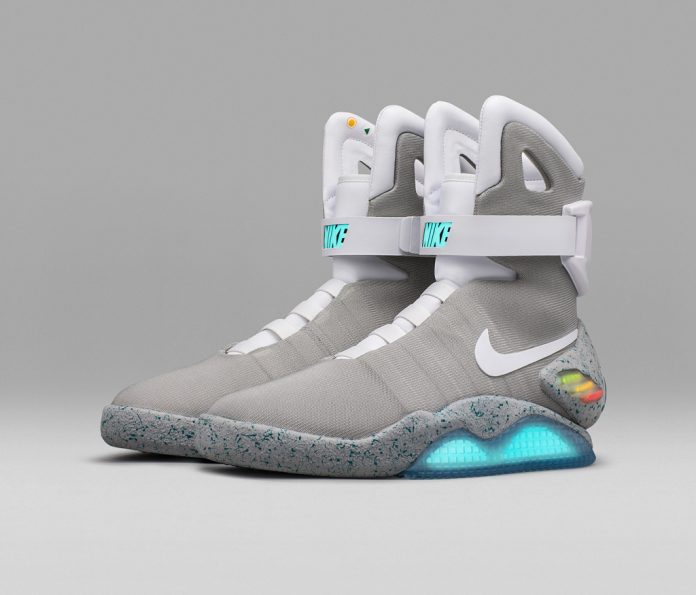 For some, choice in footwear is one of the biggest fashion statements they can make. Many people revolve their entire outfits around their choice of shoes, whether it be a classic pair of Nike Dunks or a sleek set of Gucci loafers. Men and women alike can spend thousands on a fresh pair of kicks that are rigged to impress – but just how much are people willing to dish out for shoes that can climb the social ladder in style? Even some of the rich and famous themselves can barely afford some of the most expensive shoes in the world. 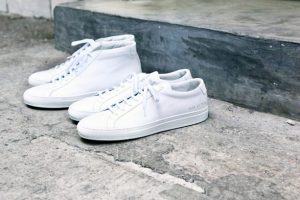 The all leather Common Projects Achilles shoe is a staple in the wardrobes of fashion enthusiasts and celebrities alike. The sneaker price tag is almost reasonable, as its sturdy leather construction and comfortable Margom soles ensure that it can last for years if properly taken care of. Each pair is handmade in Italy by trained craftsmen.

The brand’s all-white Achilles Low has been hailed by outlets such GQ as the number one all-white sneaker. Since its release in 2004, almost every brand under the sun has imitated the sneaker, but the king of white sneakers has yet to be dethroned. Due to their versatility and durability, Common Projects sneakers are often considered to be a great investment – even if the initial cost is hard to stomach,  they certainly aren’t the most expensive shoes for the quality. 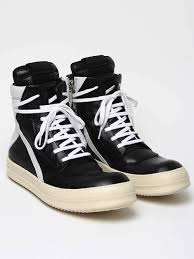 Rich Owens is a fashion designer known for his all-black designs centered around flowing silhouettes. The Geobasket sneakers are his most successful design to date and are also partially responsible for the widespread fame of the Rick Owens brand. Although Rick Owens caters more to an “edgier” aesthetic, many celebrities find his pieces appealing and wear them alongside more standard brands.

Although the price of the shoes has gone down over the years thanks to sales and secondhand markets that cater to the sustained demand, the newest versions of the geobaskets sell for at least $1,200. Limited and newer editions of the sneaker can easily command several thousand. 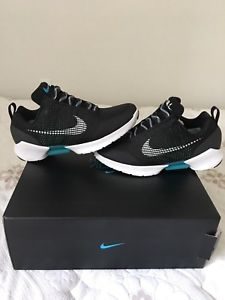 If you love sneakers but hate tying your shoes, Nike’s HyperAdapt Sneaker has got you covered. The Nike HyperAdapt utilizes mechanism nestled in the sole of the shoe that tightens its laces around your foot at the push of the button. Released in a limited batch January 2017, the sneaker first retailed for $720.

The Nike HyperAdapt self-lacing system laces last around 2 weeks per charge. To recharge its system, the shoe utilizes two magnetic pucks that stick to the sole of the shoe. The HyperAdapt is certainly practical and stylish, but demand for the new trend has skyrocketed prices throughout the sneaker market. 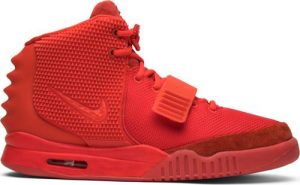 The American music producer and fashion designer has collaborated with many brands on all different kinds of clothing. His Yeezy line is one of the most hyped brands in the industry, with sneakers typically commanding several times their retail after initial runs have sold out. West is currently designing sneakers for Adidas, but his previous designs with Nike are still coveted by sneakerheads.

The Red October sneaker is a special colorway of the Air Yeezy II Sneaker. First released in 2014 on the Nike Website for $245, the sneaker sold out in just 11 minutes. Since then, demand has spiked the price of the shoe up to around $7,500. A brand new pair of the sneaker once fetched $16 million on eBay after release! 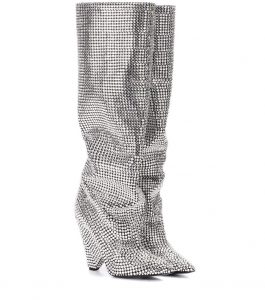 Yves Saint Laurent is a luxury brand known for producing some of the most expensive clothing in fashion. The brand is a staple in celebrity wardrobes, and even average people pay thousands for a taste of it. The Swarovski Crystal embellished version of their Niki knee-high boot is definitely one of the most expensive shoes that YSL has in their catalog.

YSL’s standard Nikki Boot retails for $1,200. The crystal version of the sneaker features the same leather construction and sturdy bone heel. It can be worn as a thigh-high boot or can be scrunched down for a more casual look. 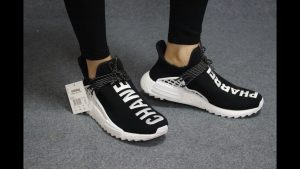 Created by singer Pharrell Williams, fashion house Chanel, and Adidas, the Human Race Sneaker was first released in November of 2017. The shoe could only be purchased from a temporary pop-up shop in Paris. It sold out in just a few days.

The shoe features typography and extra branding to denote the collaboration and comes in a wide range of colors. After the initial run sold out, demand shot up the cost of the shoe, with dedicated sneakerheads were paying as much as $25,000 for a pair – a considerable increase from its $1,000 retail! 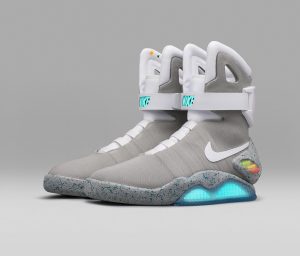 The Nike Air Mag Sneaker initially existed as a prototype. It first appeared in the 1989 movie Back to the Future 2 when protagonist Marty McFly wore them on a hoverboard. However, the self-lacing technology depicted in the movie caught the eye of sneakerheads, who dreamed of such a shoe until a similar version was actually released in September 2011. 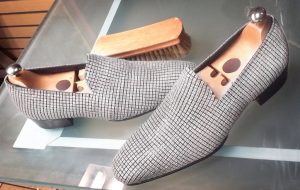 Jason Arasheben has created custom pieces for clients like Rihanna, Katy Perry, and Mariah Carey. Arasheben showed off his luxury prowess on a 2014 episode of American Idol, when rapper and actor Nick Cannon donned the pair on an episode of the show. 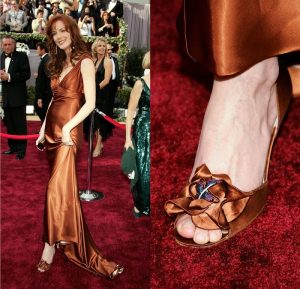 Luxury designer Stuart Weitzman could have a top 10 list all to himself. While “consumer” versions of his shoes sell for a few thousand dollars, custom jobs for celebrities often cost millions of dollars. His custom pair designed in memoriam of actress Rita Hayworth is one of his most expensive shoes ever.

Hayworth’s daughter, Princess Yasmin Aga Khan, purchased the heels from Stuart Weitzman in 2014. The shoe was designed to look like Hayworth’s favorite pair of rose earrings. The heels are tastefully adorned with eclectic blend rubies, sapphires, and diamonds. The shoes were first worn in 2006 by Kathleen York, along with a matching dress. 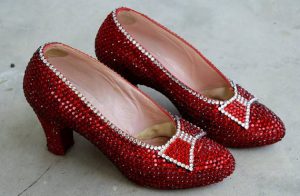 Stuart Weitzman and Harry Winston are almost tied for the most expensive shoes in the world, but Winston’s Wizard of Oz-inspired Ruby Slippers win by a hair. The shoes are modeled after the slippers Dorothy wore in the movie, the main difference being that the original sequins have been replaced with 1,350 carats of rubies and 50 carats of diamond.

The sheer amount of jewels on this glamorous studded shoe make it worthy of being the most expensive pair of shoes in the world. They have only been worn by Judy Garland, and have yet to be claimed – but they have piqued the interests of a few prestigious clients.