The entrepreneurs behind Slumberkins have been friends since high school and experienced most of their lives together. They attended college together, had kids around the same time, and they both pursued careers in Education. In 2015, they two friends happened to be on maternity leave at the same time. They used that time to collaborate their talents and experience with kids to create their plushie-blanket combination product. They were able to market it entirely in on social media and managed to sell over $200,000 in their first year of business. Let’s see if they will be able to charm the Sharks as they have their customers. 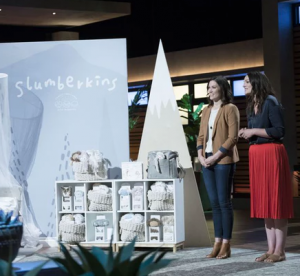 Callie Christiansen and Kelly Oriard walked into this Shark Tank and onto the stage. Kelly said that they were there to request $175,000 in exchange for a 5% equity stake in their company, Slumberkins. Kelly instructed the Sharks to think back to when they were small children. She asked them if they had a special toy that they couldn’t live without. A toy that they took everywhere, which made them feel safe. Mark Cuban had a beatific smile on his face. He said that they knew that children attached to objects that were comforting and soothing. They were both moms themselves. They designed a line of cuddly creatures that were a hybrid between a blanket and a stuffed animal.

Kelly continued, saying that this blanket toy hybrid was called lovey. They use the softest materials available. They said that kids just couldn’t help snuggling up to them. Callie cut in, stating that the toys gave children a feeling of love, security, and safety. Kelly mentioned that Callie was a summer camp counselor, and she was a teacher. They knew that their Slumberkins could teach important skills. She said that each one came with the book that focused on skills. She said that the Slumberkins were cuddly creatures with an intention. Callie said that they were on a mission to promote positive skills in the next generation and beyond one cut all the time. She asked the Sharks who was ready to get their snuggle on.

Robert was the first to volunteer. Callie and Kelly began to pass out samples. Daymond got a Yeti. Kelly explained that his story was all about mindfulness practice for children. Lori was holding a pink fox. That creature’s story centered in on big change. Kevin got a Shark Slumberkins. Kelly said that the Shark story was all about conflict resolution and they hope that he could learn something from it. This got a laugh out of Kevin. He always seemed good-natured about this things. Kelly continued, telling Mark that he got the Bigfoot character, whose story was about positive affirmations and self-esteem. Robert had the sloth which was relaxation. Robert pretended he was a little kid and threw the sloth on the stage.

Kevin began reading from the book that he received. Lori wanted to know how they’ve come up with the way that the doll looks, and the texture. Callie explains that they really wanted to make something that was more unique than anything out on the market. They also used a fabric that was more use for the fashion industry rather than the toy industry. Kelly explained that they’d been in business for about 18 months. They were both making the toys by hand in their homes. They eventually taught themselves how to sew. Eventually, they found out they had a demand for them. Kelly said that they and invested $200 each for fabric. Robert jokingly said that they were all in. Kelly agreed, saying that on an educator salary they were all in. She said that they were pulling from savings to contribute to that.

She said that the next six months was about meeting the demands that they’d created through social media. They hired local seamstresses and create their own manufacturing empire making cuddly creatures. Robert asked what they sold’s the Slumberkins for, and Kelly informed him that they retail between $44 and $52 each including the book. All the Sharks thought that the price point was a little high. Mark wants to know how much they cost to make. Kelly informed him that it was $15 per item. Kevin said that that was a lot. Robert wants to know how they’d created the demand for them. Callie told him that was all through social media. She said that they had a very engaged Instagram following. She said that the toys practically sell themselves when the mom buys one and then posted pictures on their Instagram of their kid sleeping with the toy.

Mark said that it all brings up a fundamental question. Mark said that their margins were going up about 80% if they just sold on their website. He said that that was a good thing. Kevin wondered if he was suggesting that they just stick with the website instead. Mark said that that was the question. He said that they had the potential to make a killing if they kept their cost down. He thought that they could make really good money. He thought that a whole new set of problems would arise when they tried to scale it into retail. He asked them if they were sure that he wanted to do that. Kelly said that she was sure. Mark told her that they might not make as much money and their profits would be going down. Callie said that she felt that it was important to make accessible products now that their cost was going down.

Mark asked if that meant they were going to lower their price. Kelly said that they would like to because they were educators, and he saw the need for accessibility. Robert asked them if it was the right business decision. Kelly told him that that was why they wanted help moving forward so that they could enter the retail market strategically. Mark asked them if they would rather reach more kids or make more money. Kelly said that at the point they were at, they wanted to reach as many people as possible. Kevin said that they would have to change their business plan because they can’t compete at $52 in the plush category.

Lori protested, stating that it wasn’t just a plush toy. They were also online and people were talking about it. Kelly said that they were also paying $52 for it. Callie posed a hypothetical situation. She wanted them to picture them taking the investment relationship into a bigger space such as Amazon. Daymond said that it wasn’t for them to write their business plan. The Sharks were just providing advice. They both said that they appreciated it. Daymond said that he was assessing the risk of the business, however. He said that he had been in the plush business a few years ago, and realized how brutal it was. He said that the companies that were in that space were making them in mass and driving the price down. He said that he did not want to be in that space because he was still licking his wounds from the first one. He went out.

Kevin was up next. He said that was always bad when Sharks were redefining their business plan. He said that was painfully obvious to him that the only way it would work is if they stayed where they were, and sold to the premium toys as a luxury item. The could expand their story online and sell directly to consumers. He said that wasn’t worth even $1 million yet, which was a third of their valuation. He went out. Mark said that the hard part was what came next. He thought that they had done a great job so far, and their scarcity was working for them. He thought that they had a lot more work to do in terms of product, pricing, scale, social mission, and distribution. Mark said that it wasn’t worth helping them for only 5% of the company. They would have to be a $2 million company before he saw any return on his time. He went out. He so congratulated them on what they’ve accomplished so far.

Lori said that she really liked the product and the mission. She said that for her to invest in something, it needs to be more unique. She didn’t feel like it was wise to go up against the establishment in the arena. She said that she loved both of them, but did not love the competitiveness that it would require. She went out. They both thanked her. Robert was last shark standing. He said that he thought it was a great mission and agree on their product. He didn’t know why they wanted to try to expand it. He said that he believed in what they were doing today. He called it a slow burn. He thanked them for being teachers, and he went out.

Slumberkins Now in 2018 – The After Shark Tank Update 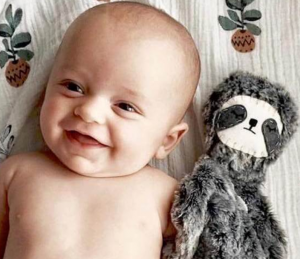 Even though they did not get a deal with any of the Sharks, Slumberkins still felt the effects of the Shark Tank effect. According to the interview they have used the influence they gained from appearing on the Shark Tank to expand and grow their business. They sold more than twice the number of products this last year than they did the year before the Slumberkins Shark Tank episode. They expanded the age range they can serve by creating a full stuffed animal. Most exciting of all – they are going to pair up with the Jim Henson Company to create a live-action puppet series aimed at preschoolers.