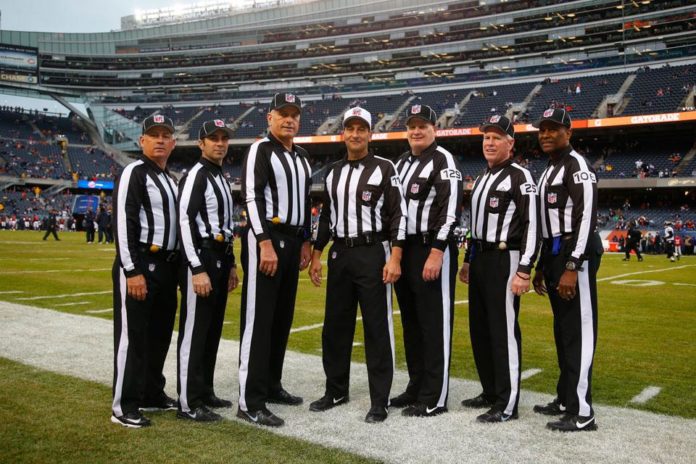 The single most popular sport in the United States, Football has some of the highest paid athletes in the world, and arguably some of the bravest refs out there. Just think about it; These guys, usually much smaller than the players, without the helmets or pads, are making rulings that can make millions chant against them, and teams carry some animosity.

One would have to assume they’re making quite a bit of money for their time, and some may even be wondering how to become one of the few to wear the striped jersey. Here, we take a look at average NFL earnings and how to become one.

The official numbers have not been disclosed. However, some sources report that they make $205,000 per year, which is an increase from $150,000 in 2018. Remember, though, they don’t get paid on a per-game basis. Rather, they’re given a flat rate for each season. And if they’re chosen for playoff games, they’ll earn an additional bonus, which can range anywhere from $1,500 to $5,000.

NFL referees also get a hefty bonus if they’re chosen to work the Super Bowl. It depends on their experience, but it can range anywhere from $40,000 to $50,000—and that’s on top of their base salary so you can imagine that it can be quite a well-paying job for veterans.

How to Become an NFL Referee – Do You Need to Go to School?

Now, while the idea of riches far outweighs the sound of boos and jeers, let’s take a look at how to become an NFL Referee. Unlike the old saying, the first step in this journey is by far the easiest. Simply start watching or playing football, getting a grip on the rules and how play can be broken down.

While this seems like a “no duh” sort of suggestion, keep in mind that later experience may rely on observations learned in these first few months.
Next, see if you can get your hands on an Official Playing Rules book for the NFL. Study it as you would any textbook, and be sure to understand the content in a real and meaningful way; Knowing the terms is great but seeing it on the field is something entirely different. A good way of testing yourself on the knowledge of this sometimes complex and messy book is to go through a football game with this in your lap and try to either predict what a ref will call if a flag is thrown, or see why they could make that call.

This will help you notice when a call is in fact legitimate or not, and give you visualization. Notecards may also be handy at this stage. If you really want to be ahead of the game, try memorizing as many hand signals as possible when watching for later use.

After getting this part of practice down, you can finally begin actually working towards becoming an NFL Referee but be warned, it’s a long road ahead. You should now enroll in a Rules Clinic, but be warned, there are multiple ones for multiple purposes.

One is encouraged to first go to those for High School Football and work as a ref for a local team to get the hang of it for free. Then one can begin working in paid clinics that can help with advanced training. These are usually several hundred dollars, but if you get an official NFL Football Officiating Academy certificate, it certainly helps when you start to make money by plying your trade. One may start working for Semi-Pro or college games by this point.

Now, knowing the rules and being able to make judgment calls are two very big facets, but there’s yet another one we’ve yet to address: Fitness. While most wouldn’t think being a referee for a game is an athletic job, they would be very wrong. Everyone on the job has to have some endurance and speed in terms of keeping up with players and movements, and thus a solid foundation in cardio exercise is a good call.

We’re almost to the goal now. Now, all you have to do is work. Usually around a decade of experience is adequate for you to be given a shot at the NFL, not as a full referee but a lineman. Linemen tend to get paid around $75,000 a year for their services, but this is a decent salary to get your bearings in the big leagues. Consistently perform well at this level and you will be promoted to full NFL referee once an opening is made available.