Back 9 Dips 2023 Update – What Happened After Shark Tank 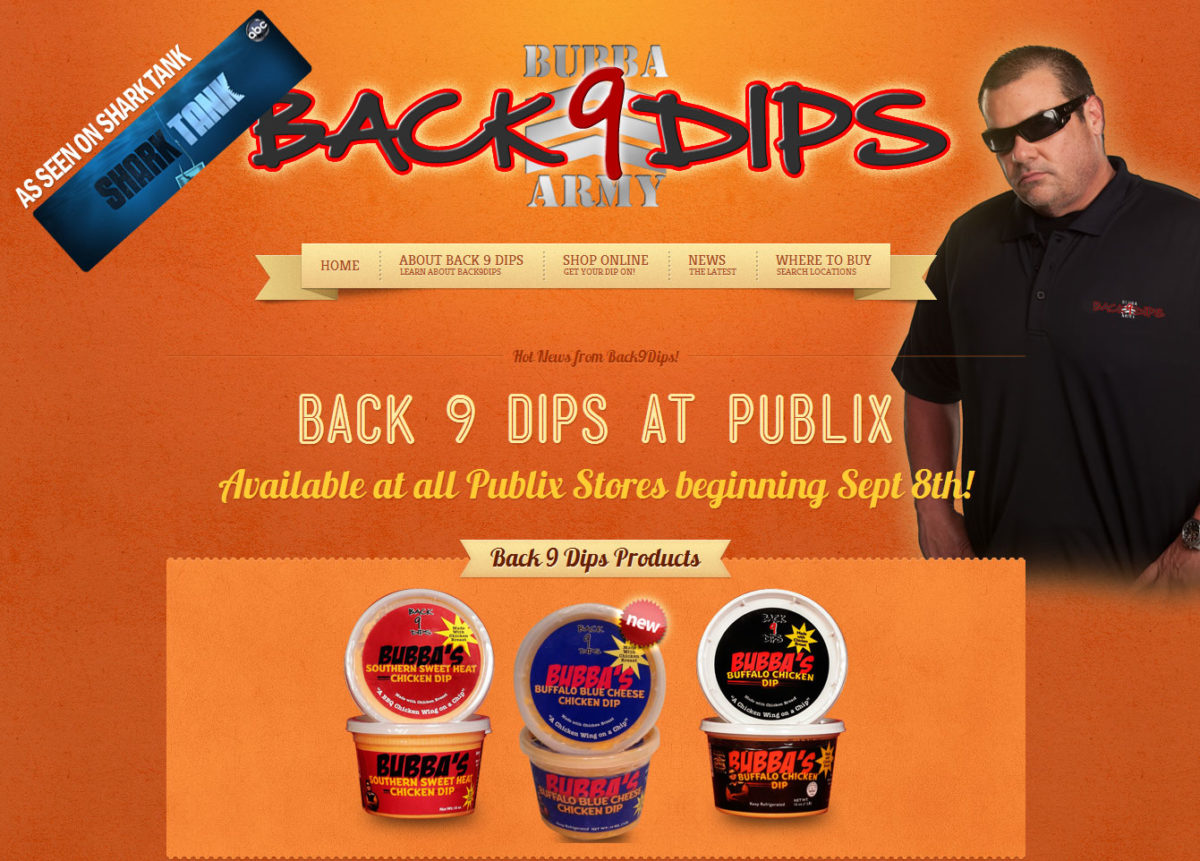 Back 9 Dips Before Shark Tank

The audition tape for Back 9 Dips David and Dominique Mealey showed the couple playing with their son on a bright, sunny day in Tampa, FL. The pair told the audience that they were expecting their second child soon and that they’d been married for five years. David said that when he moved to Florida, he hit it off with Nique, and landed a job with two large golf companies. After that, though, things got much more complicated. The economy caused him to lose his job after the position was eliminated.

David decided to take that opportunity to jump headlong into his passion – cooking, The two started a barbecue catering company. Nique claimed that the pair worked tirelessly to develop a business that would be a success. He tape showed a bunch of happy people chowing down on delicious barbecue foods. Nique said that there was one food in particular that customers kept approaching them for – their chicken dip. The pair knew that they had something great on their hands. They were on the Shark Tank to seek an investment so they could get their product to the masses. She claimed that the Sharks would be hooked once they tried their signature dip. The video ended, and the couple walked into the Shark Tank holding hands, which was a nice showing of solidarity .

Back 9 Dips on Shark Tank 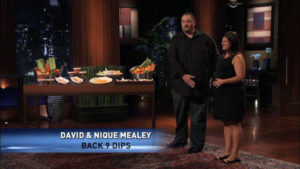 David and Dominique introduced themselves, and the fetus in Nique’s uterus, and told the Sharks that they were seeking $150,000 in exchange for 15% of the business, Back 9 dips. Before they launched into their presentation, the two handed out samples. Each Shark received a small plate with dips and chips on it. While the Sharks munched on the chips and dip, Nique let them know that Americans ate over 1.25 billion chicken wings over Superbowl weekend. David ct in, letting the Sharks know that they were currently tasting a medley of Back 9 Dips buffalo chicken dips. Each dip is a blend of dipping sauces, spices, and white meat chicken. Daymond said that the dip was essentially a chicken slurpee, which is a pretty gross way to put it. Mark Cuban made a face.

Lori said that the dip was delicious, and Nique thanked her. Kevin asked the other Sharks if they remembered the Bass-o-matic, which was a fish blender, and said that this essential came from a chicken blender. He said that he was visualizing sticking a whole chicken in a blender, which had Mark and Daymond in tears. Kevin was also laughing so hard he was crying. David tried explaining that it was the same thing as chicken salad, just ground up a bit more. The Shark just kept laughing as David spoke, saying that there was only 2 chicken breasts per tub. Lori cut in while the other Sharks composed themselves, saying that it really was a delicious dip.

Robert seemed to gather himself up, and asked them how they started their business. Nique told him that they started a different business, a catering company known as Back 9 BBQ. David said that barbecue was his specialty, but people enjoyed the dips. He continued, saying that he decided to market the dips on a retail basis. Both college students and Sharks could enjoy them equally.

Robert wanted to know what the life-altering event was that lead them to start the business. Nique told him that David lost his job when she was 8 months pregnant with her last child. She said that they downsized from a large house to a small house, sold their second car and possessions in order to afford that move. David stated that it had been a blessing in disguise. Kevin asked them if the business was their sole source of income, and Nique confirmed that it was. Kevin asked what their sales looked like, wanting to know how much money they made. David told him that they just hit $400,000 in 2 years. They have about 400 retail accounts, one of them being a large supermarket who put them in 60 test stores. The grocery chain gave them a weekly sales number to hit, and they hit it every time. David said that people will pay extra for a premium product.

Lori asked what they were charging, and David told her that it retails upwards of $7.99. Daymond wanted to know how much it cost to make. David explained that it cost about $2.52, and it wholesales for $5.25. Daymond asked how much they invested into the company, and David said $150,000. Mark looked impressed, saying that it took guts for them to take that chance when their back was against a wall. He asked after their kids, and David stated that they had a 3 year old son, and a daughter that would be there in two weeks – or sooner, if Kevin keeps laughing. This had the Sharks laughing.

Robert brought the mood back down, reminding them that they had a lot riding on the dip. He asked them if the reaction to the dip was always entirely positive. Nique said that when people try it in grocery stores, they take a sample and turn back around to see what awesome thing they just ate. Robert asked if anyone was turned off by the fact that it was a blended chicken dip, but Nique told him that most people just thought it was a really creative idea. Lori said that she really enjoyed it, and wanted to take another sample. She stated that she also loved David and Nique, saying that they were great. She wanted to help them, but did not think that she was the right person to help them get into supermarkets. She was the first to reluctantly go out.

Mark said that he knew the couple would do beautiful things. He continued, saying that he also didn’t think that he was good at food distribution of this kind. He went out, saying that he liked what they were doing, but the process did not play to his strengths. Kevin stated that he admired their motivation in the face of losing David’s job. He stated that it’s a rough economy, and the same situation is happening to millions of Americans. But they were able to turn it around, and make it their livelihood. Kevin went on to say that there was still an enormous amount of risk with their being a startup. He stated that he could invest in them, and put a royalty on it so they would have to pay him every time they sell one, but he did not want to do that to honor the chickens who lost their lives for the product. He went out.

Robert said that he admires the product, but he stated that it was a brutal business. They need someone who is going to help them along that road, and he was unable to offer that. He could only provide advice and encouragement. He wished them the best, and went out. Daymond said that it was a hard decision for him. Last year, he was on the fence about another food company, and ended up not invested. That company turned around and did $10 million in sales. Lori cut in, and said that she had been sitting there thinking about how much she liked the product and the entrepreneurs. She stated that she wanted to come back in, and potentially do a joint deal. Daymond considered the prospect.

She asked if Daymond would go in a $150,000 at 25%. She said that she thought they could do something great. Daymond stated that it was really hard because he remembered what it was like to have nothing, and have a child, and another on the way. He was given a shot by L.L. Cool J, and by the time his daughter was born, he was a millionaire. He looked like he was about to burst into tears. Lori softy asked him to give he couple a shot. Nique started crying from the pressure, and David comforted her. Daymond said that he was going to go out because he felt like he couldn’t bring anything to the business, but Lori said they could figure it out together with the entrepreneurs. Daymond stated that he thought that they could do it without him, and he went out.

Robert said that he would be happy to go in with her, saying that sometimes out just need a chance in life. Robert stated that he couldn’t add value today, but he could give business advice. He told them that he wouldn’t be sitting in the Tank if no one ever gave him a shot, and either would Lori. He offered them $75,000 each for 25%. David said that they would take the deal, and would not let them down. Lori hugged Nique as Nique apologized for being hormonal. Daymond approached them, saying that his card would be there for them, and the other Sharks to call him for advice. He also hugged Nique, saying that she reminded him of his wife. Let’s see how they made out.

The company saw a huge boost in sales after appearing on the show. In fact, so many people were trying to buy their dips that their website crashed. Fortunately, that was only a temporary problem.

David began focusing on the manufacturing side of things while Nique handled all the marketing. Before they knew it, they had gotten the dip into many grocery shops in Florida, Ohio, Missouri, Illinois, and Georgia. They even landed a deal with Costco.

However, that didn’t last for long. In 2013, the company came under fire after it was revealed that one of their dips contain anchovies, a common allergen and that it was not mentioned anywhere in their ingredient list or on their website. As a result, they had to recall 112,500 pounds of Buffalo Blue Cheese Chicken Dip. It goes without saying but that likely took a toll on their financials.

Unfortunately, the company never recovered from the incident. If anything, it had also hurt the reputation that they had worked so hard to build. They eventually went under later that same year and as of 2023, they haven’t come back. Their social media accounts also seem to be abandoned, which isn’t surprising given everything that has happened.

Will they be coming out with a new product any time soon? It’s hard to say but our best guess is no; they seem to be busy with their day jobs and let’s not forget, they also have small children at home.