Before appearing on Shark Tank, the Fleming brothers invented the ‘InstaBol’ which was later changed to Bag Bowl, which is a much catchier name. They changed their marketing and their website, but the search engines needed to play catch up. Bag Bowl is an interesting idea, but will it catch the Sharks attention long enough for them to consider investing? Let’s take a look. 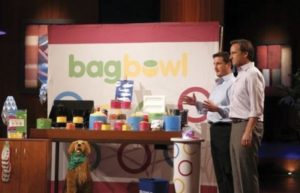 The Fleming brothers walked out into the Shark Tank in matching button-up shirts. Brian Fleming introduced himself as the handsome one, and his brother, Kevin Flemming, as the smart one. They said that their company was bag Bowl, which they repeated in a sing-song voice. Robert softly sang it back. It was a little awkward. Brian stated that they were looking for $40,000 in exchange for a 3% equity stake. Kevin F. Said that they’d perfected an exoskeleton to provide structure to any size zipper bag, from gallon to sandwich bag size. Mark looked amused. Brian continued, saying that you can just slide the bag over the exoskeleton, creating a sturdy bowl. This would be handy to pack on the go lunches in a way that conserves space. If the consumer has leftovers, they can just put them in the cooler, fridge, or cupboard. If not, the bag can just go in the trash or recycling bin.

Kevin F. Asked if that meant he didn’t have to clean up after himself anymore, and Brian confirmed that it did. They high-fixed, to the great amusement of Mark Cuban. Kevin F. Said that it would be suitable for picnics, or potluck so, and Brian agreed, stating that it would be useful for getting pasta sauce off of the stove into a bag. Kevin F said it also meant that there wouldn’t be anymore mismatched lids for heavy plastic wear. Kevin F also stated that chip manufacturers could find a way to use their technology to turn the packaging into a bowl. Brian said that the technology could also be used to create a single serving dog food product.

Brian stated that the Bag Bowl could bring comfort to the modern living. Their stated goal was to change the way that the world consumes food. They joined hands and asked the Sharks who wanted to help them take the bag bowl global. Robert asked if they could see the product, and Brian gave them each a Bag Bowl. He told them that it falls totally flat when won’t being used. Lori asked if it came apart, and Kevin F. Explained that it was an extra sonic weld that supported microwaving dishwashing.

Mark wondered how much money they’ve put in, and was told that they’d invested $40,000 of their money. Kevin F. Said that their plan is to license the Bag Bowl out to larger companies. They could not handle the cost of manufacturing it themselves, and decided to “lease out the whole orchard,” o to speak. Kevin asked if the market was too niche since he already had a bowl in his home. He said that the chip company would be unwilling to increase their costs by $0.20 to provide the Bag Bowl design. He said that most people already have bowls, so the product was unnecessary, except for tailgating.

Brian said that maybe Kevin hasn’t seen what direction packing is going in since many current packages are trying to be a container to eat out of as well. Kevin said that that was the issue since they are pushing the burden of the cost back on the manufacturer. Brian stated that they have already spoken with large plastic manufacturers, and they indicated that it would only be an additional $0.02 to add the bag bowl structure. Kevin told him that on that scale, two cents is a lot. Brian said that the magnitude of the business could be huge since so many plastic bags are used every day. Lori asked what would stop another company from copying the design.

Kevin F said that they have a utility patent on the product. Lori asked if it was already issued, but Kevin F told her that it was still pending. Lori said that doesn’t mean it’ll ever issue. She asked them what the unique property was that they were patenting, calling it just a circle of plastic. Kevin F said that some of the most original patents are simple ideas like the post it notes. He stated that the patent was designed to be a structural exoskeleton for a plastic bag to fold over the sides. Lori told them he thought the idea was smart, but she did not see it becoming their intellectual property.

Lori asked them if they were currently selling the product. Brian said that they brought the Bag Bowl to a large trade show, and showed it to everyone there. He stated that he was one of 30 entrepreneurs to win an award for his design and that the other feedback they received was “overwhelming and tremendous.” Daymond asked if they took orders for their product. Brian said that they did, and Lori wondered how many orders they were able to get. Kevin F stated that they sold out of what they had, but they did not get any orders. Daymond asked if they were just romancing the truth, so they did not have to admit that they had no sales.

Robert looked greatly amused, saying that he would call him Cubes from now on. Kevin F stated that he needed the Shark’s access to resources and connections to get things really off the ground. Daymond told them that they had no sales or patent, and they want the Sharks to call on their behalf to get the deals. Kevin F said that they weren’t looking for the Sharks to immune their character and that it would speak volumes about their partnership if that is how he thinks. Daymond agreed and went out.

Kevin said that the greatest million dollar ideas come from products that either solve problems or cut costs, and he thought that their product did neither. HE went out. Robert addressed Brian and told him that they had a bright idea. He said that he had children, and the idea reminded him of juice boxes. Kevin stated that they had made money because it cut the costs of glass bottles. Robert said that he could see that it also made things easier. He made an offer for $40,000 for 45%. He stated that he could make a couple of deals, and see very quickly if it would make money or not.

Daymond asked Robert if the “3-inch hula hoop” he was holding was now worth $100,000. Robert said that it was either a splendid idea, or it wasn’t, but he would find out very quickly either way. Lori asked if she could get up and look, and Brian and Kevin F invited her up. Daymond asked if she was interested in the product, and she said that she didn’t know. Brian wondered why she shouldn’t be – “she’s attractive, and she likes entertaining gentlemen.” Kevin told him that he was sucking up. Lori experimented with the Bag Bowl and said that it was easy to work before going back to her seat. Brian asked the Sharks to imagine if the 60 second Uncle Ben’s rice container was capable of turning into a bowl, instead of the “nightmare” of pouring it into another one.

Lori said that she didn’t agree with the licensing plan, since if they showed it to other companies, those companies would just make their version. She did not believe that they would get the patent that they needed. She said that she can get the products manufactured, and onto QVC, and sell hundreds of thousands of dollars worth within minutes. She offered the brothers exactly what they asked for – $40,000 in exchange for 33%. They astonishingly requested a moment offstage to decide. Mark blew up at them, saying that they got exactly what they wanted. He did not understand why they would need to go offstage for that. Daymond told them to have a minute and see what happened. Lori told them that if they walked out, she would pull her offer. She told them that that was incredible that they would even think to do that. Kevin F told her that they would love to do the deal with her. She said that she was very excited, but she sounded pissed. Let’s see how that worked out for them.

Bag Bowl Now In 2022 – The After Shark Tank Update

The $40,000 deal with Lori was eventually finalized. Due to manufacturing issues, however, the product itself was unavailable for more than two months after the episode aired. Fortunately, things were eventually fixed; they even appeared on QVC as promised. They also came out with themed BagBowls in 2013, which were available from Amazon.

Customer reviews were mixed, however. While some people found the bowls to be lightweight and convenient, others had trouble getting them to stay open. There were also complaints about them being flimsy, which made them hard to use. Many people also agreed that it doesn’t hold its shape well, especially after being collapsed.

In the end, the business only lasted a few years. It was eventually announced in early 2018 that the brothers would be shutting down the business. Not only did their website go offline but they also pulled their products from Amazon, which by then, only had a 3-star rating out of 37 global reviews. Their social media accounts were also abandoned. Take their Facebook page, for example, their last post is from April 2016.

At one point, they came out with a new product called the Daddy Spill Stopper Training Cup, which prevents food and fingers from entering the beverage, however, that too has been pulled from Amazon. If anything, it wasn’t very popular. It only had a 2.5-star rating out of three reviews and looking at them, the consensus seems to be that it wasn’t particularly good at preventing spills, which is what it was designed to do in the first place.

What are the brothers up to now? According to LinkedIn, Brian never left his day job; he’s still a real estate salesperson with the BF Real Estate Group, which he’s been with since 2006. Not only that but he’s also a partner with Secure Transport as of 2022.

As for Kevin, he worked as a Cloud Infrastructure Strategist at Foghorn Consulting from 2014 to 2021. The last that we checked, he was the Senior Director of Communications at the Evoque Data Centre Solutions, a Texas-based company that offers IT networking services to local and global businesses.

Will we see the pair back on Shark Tank anytime soon? Probably not. For one thing, their company no longer exists so there wouldn’t be an update segment. It’s also been several years since they were in the tank. If anything, they’ve moved on to other ventures.