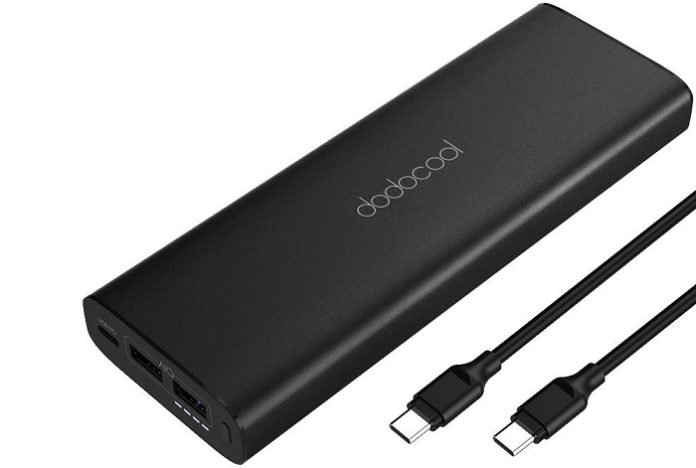 Technology is forever moving forward, what was once a fine product, is now an obsolete one. With the advent of USB-C devices, the need for better battery tech rose with them, but sadly for the most part that tech has languished. I remember when a phone could last a few days, a laptop near as long as well, but with rising power consumption the need for a portable battery solution becomes a concern for us all. Thankfully there are a huge variety of portable chargers on the market right now, and this USB-C compatible model from Dodocool is an excellent low-cost solution.

This is far from the first Dodocool product that has landed at my door. The company makes all kinds of electronics and ships them globally, they are based in China. That means two things, the prices are low and the warranty is lackluster. But there are ways around that. Out of the box, the Dodocool portable charger is not much to look at. A utilitarian design, one that won’t match your Apple products, but then I am a bigger fan of function over form. The simple black box is 2.6 x 7.4 x 0.92 in and weighs a little over a pound. Excellent for portability, easy to fit pretty much anywhere, and not so heavy as you would notice it. In the box, there isn’t much, just the power brick itself, a micro USB to regular sized USB cable, a USB-C to USB-C cable and a user manual, but it’s a pretty self-explanatory item. I do like that it comes with both cables, as it’s always nice to have a few spares sitting around. Overall we are off to a good start. 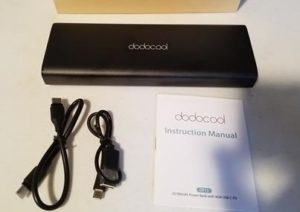 It’s a very bare bones build, and I am sad to say that it does not come in any additional colors. Not a deal breaker by any stretch of the imagination, but I still would have liked to see a bit more variety. The key selling point with builds like this is the price, and the Dodocool Portable Charger is sitting at $65.99, putting it well into the low end for its specs. The warranty is fairly standard, with 1 year of limited coverage from the manufacturers. Unfortunately, warranties like that tend to be a little inflexible with their definitions, and while the terms as laid out by the Dodocool site seem on the level, I know from experience that not all firms cover product failure as a result of normal use. Thankfully buying from Amazon negates that caveat, as their customer protection services are both top notch, and on your side. That extra peace of mind is wonderful and is also the main reason I keep importing all my electronics.

The specs of the Dodocool PD Portable Charger are great, a 20,100 mAh capacity for a start. Most models these days have that, and it greatly increases the lifespan of any portable device. It’s a 45W build, making it compatible with a huge array of portables, and it has no trouble providing the max output in USB mode. The onboard smart chip is capable of detecting in real time what kind of device is plugged in and providing power accordingly. Charging the Dodocool battery takes a few hours though, so bear that in mind. When it comes to the charging speed there are a few things to remember. Charging devices comes down to the difference in respective charge, so the less power left in your phone or tablet, the faster it will charge. With such a large battery getting up to an acceptable charge takes only a few minutes, but the closer you get to 100% the longer it will take, so on average devices plugged in will take around 3 hours to reach a full charge. Not a bad timescale, and reaching a usable battery level takes far less time. 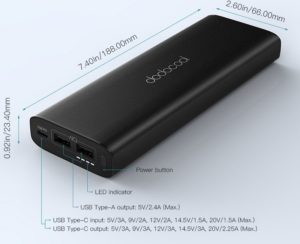 The Dodocool 20100mAh 45W PD Portable Charger is a battery. Seems like a silly thing to say, but I think a lot of us have kinda forgotten what a battery literally is, a portable power source filled with volatile combustibles. I have purchased quite a few of them over the years, for this laptop or that handheld, and I tend to stress test them rather vigorously. With the Dodocool 20100mAh 45W PD Portable Charger, this did not prove to be a problem. I simply plugged into all the ports and stressed the power consumption on my devices, two large phones, and a Dell Laptop, and left it all running in a safe place for a few hours.

Overall there is a lot to like here. The look of the build is nothing to write home about, but it is sleek in its own way. The lack of color options is disappointing, but hardly a major issue. The feel of the build is great, a prefer a bit of weight to my electronics, and while it is only 1lbs, it is pretty small, so there is a real sense of quality. The capacity is fantastic, and the charge time better. The price is always going to be the main selling point though, and Dodocool has knocked it out of the park. If you are on the market for an inexpensive battery pack, with USB-C support, then this is one you need to check out.