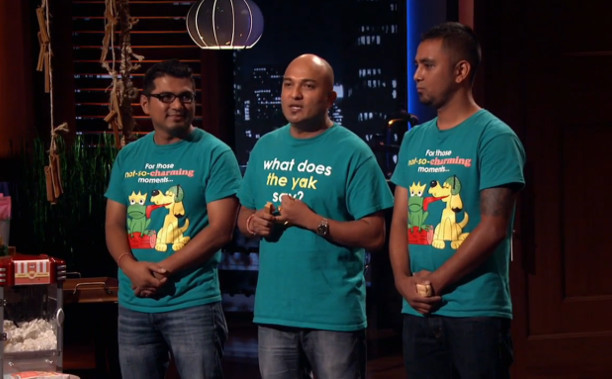 Himalayan Dog Chews was founded in 2003 after brothers Suman and Sujan Shrestha joined forces with an unrelated friend with the same last name, Nishes Shrestha. The company was started after one of the brothers noticed a dog chewing on the traditional hard cheese of Nepal. The cheese, made from boiled yak’s milk, as well as salt and lime. It’s pressed in burlap for several days, and then smoked, and dried for a few months. After the trio worked to make sure that the product was safe for dogs, they made their first sale in 2007 at a local dog fair.

The Himalayan Dog chew only went up from there. A few months after that dog event, they opened their first commercial space. They have since expanded, directly employing 40 people, and using 3,000 Himalayan farmers for their yak and cow milk. Before going on Shark Tank, they already generated over $5 million dollars in revenue. So why did they need the Sharks? Let’s take a look. 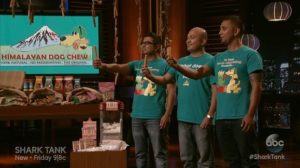 The brothers started off by showing a video, which explained that they lived in Washington, but were born and raised in Nepal. It showed them playing with dogs in a lush yard, and it showed their large family in Nepal. His brother, Sujan, is still in Nepal, handling business with the farmers in Nepal. The three entrepreneurs introduced themselves with a Nepali greeting. They said that they are seeking $750,000 for a 5% stake in Himalayan Dog Chew Company. This seemed to shock the Sharks- they all shook their heads and said “Wooooow.” The trio behind the pet snack company said that they had taken a yak milk snack that was eaten by the Himaylan people, and turned it into an all natural dog treat. The treats are made with yak and cow milk, lime juice, and salt.

They handled out samples, and the Sharks opened up the packages. Lori took one out to smell them. Robert asked them if the cheese they used was only available in Nepal, and if it was only for dogs. Sijan said that the cheese was only in Nepal, but that it was a people snack there. There was a bit of commotion as the Sharks rustled in their bags, and talked over each to ask if they could eat the samples they were given. Kevin started to chew on his, as it was explained that the cheese was made harder for the dogs, when it was brought to the U.S. They also showcased what was essentially dog popcorn. It was in a microwave bag, and the cheese puffs out as it is heated. Robert and Mark asked if they could try it – Mark even said to “Bring it on, he’s hungry.” They said that he could eat it, it’s safe, but it’s very bland. Mark and Daymond ate the sample of the pre-popped cheese, and Mark said that it’s not bad.

Kevin, predictably, asked about their numbers. They said that in the last year alone, they did $5.4 million in sales. All of the Sharks were very impressed with those numbers. The trio said that they sold a little over a million packages. Lori asked where they were selling them, and the answer was pretty shocking. They are already in 6,000 stores, mostly independent pet retailers. Mark asked why they were here.

The threesome behind Himaylan Dog Chews said that they were mainly there for the partnership with a Shark. Robert asked them what their secret was, since he had never seen someone make so much money from dog treats before. They said that they started with $3,000, and pushed all of their profits right back into the business. Daymond said that he would like to ask them for a job. Kevin said that their valuation of their company at $15 million, which is 3x sales, was a little optimistic. Sijan said that it was based off of current sales projections, which had them earning $8 million this year. He said they planned on keeping half of the money that they requested as salary for themselves. The Sharks seemed flabbergasted. Robert said that he admired the honesty, but told them that it was not exactly what the investors wanted to hear. Daymond had his head in his hands. Mark went out, saying that they could simply borrow against their cash flow to pay themselves. He commended them on taking the PR opportunity.

Kevin was up next to make an offer. Before he went into the details, he asked if any of the other Sharks were interested. Lori said no, saying that she did not understand the business, or why it had made so much money. Daymond said that he was interested but he was out. Robert said that he was interested, but that he did not think it was worth as much as the trio made it out to be. Kevin said that he would like to spend the $750,000 towards the business as a loan, at 10% interest and a 5% equity stake. Robert jumped into it, adding an additional 5% equity stake for a total of 10%. The trio seemed hesitant, asking if they could go to talk it out. Kevin told them to go ahead.

They talked it over, saying that 10% was too high for them. When they came back in, they were told that because they left the tank, the waters got a little murkier. Lori expressed interest in the company, which brought them up to 15% equity in exchange for the 3 Sharks. They had a decision to make as the show went to commercial. The Himalayan Dog Chew company decided to humbly decline. Lori asked what was the problem with the deal. They declared that they don’t like that it is a debt deal. They asked for a straight equity deal for 10%, but Kevin stated he was not interested. Mark said that they should not take the deal, that they would be stupid to take it. Lori went out again, not liking the counter offers. Kevin went out, saying he had no interest in an equity deal. Robert took the opportunity, but at the 15% stake. The three refused, and Robert went out. They said that they were comfortable with walking away, not wanting to devalue themselves.

Himalayan Dog Chews Now In 2023 – The After Shark Tank Update

While they didn’t land a deal in the tank, they have managed to build on the company’s previous success. For one thing, they’ve expanded their line considerably since the episode aired. Nowadays, they also offer Ruff Roots, a “distinctive dog treat” that’s made from Mediterranean Heathland tree roots.

Not only that but they also sell various types of doggy cookies as well as a line of treats called “Cubits”, which are made with natural ingredients with no artificial preservatives or flavor. And like their Himalayan chews, they are also lactose, soy, corn, grain, and gluten-free. Currently, there are five flavours: bacon, yogurt, chicken, peanut butter, and salmon.

That’s not all, they’ve also introduced a churro treat, which is available in various densities (soft, medium, hard). There are also different flavors to choose from including peanut butter, bacon, chicken, and churro cheese. Made in the USA, they come in packs of four in a resealable bag and are grain, lactose, and gluten-free. They’re also easily digestible so you won’t have to worry even if your pup eats the entire stick.

Aside from treats, they’ve also started selling their own line of dog toys. For example, there’s the Bonehead (available in various sizes), which is designed to hold their Himalayan dog chews and keep them steady while your pup is chewing. Not only that but they can also be used with other chews as well such as carrots or bully sticks.

In addition to that, they also offer traditional dog toys including those with squeakers. For those who’d like to check out their products, you can visit their website at himalayan.pet. You can also get their Himalayan Dog Chews from Amazon. If anything, they’re highly rated on the site, with a 4.5-star rating out of nearly 9,000 reviews. Looking at some of the comments, most people seem satisfied with the product, with many saying that it “keeps their pup occupied for hours”. That’s not all, many have also mentioned that the chews, which have no smell, seem to last forever.

Having said that, some pet owners have run into issues with the product. For example, one user wrote that the chew left tiny shards all over the place after his puppy chewed on it. Others wrote that it upset their dog’s stomach. Still, most people seem satisfied with the product, which is reflected by its stellar 4.5-star rating.

At one point, they also offered dog leashes, however, they are no longer available as of 2023. Who knows, though, they might decide to bring them back sometime in the future.