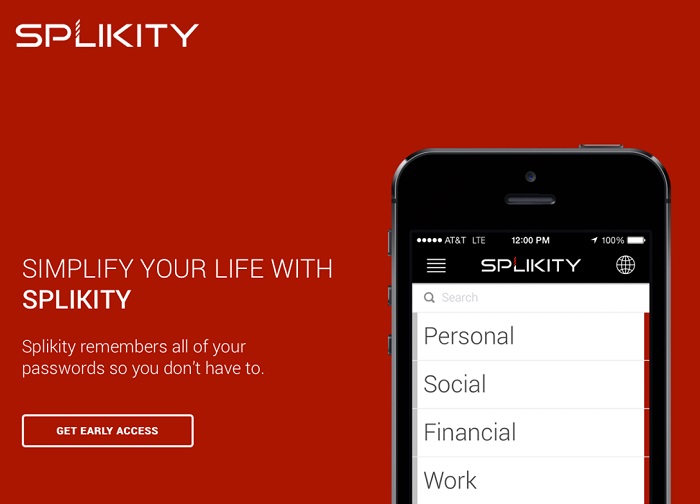 The technological revolution of the last few decades has changed our lives beyond all recognition. There is no aspect of our lives that remains untouched by the benefits of technology, but of course, there are new problems that come with our increased use of technology too.

Having to remember a huge number of passwords for a variety of websites and applications is a problem that affects us all. They always have to be different for every site, and in order to keep our online transactions and communications secure. they have to be too complex for us to remember easily, so what’s the solution?

The founders of Splikity, brothers Chad and Doug Clark were the victims of a harmless prank in 2013, when their friends hacked their eBay account and began making bids on a variety of undesirable items. The prank didn’t cause any lasting damage, but it made the Clark brothers think more seriously about their own online security. They had been fortunate this time that the attack was merely a prank rather than malicious, but next time they might not be so lucky.

The brothers developed Splikity to overcome the password problem for once and for all. They designed a software application that could be used to safely deliver passwords to websites, without having to save any of the details onto a device or browser, therefore making the whole system safer from attacks by hackers. The software used military-grade encryption and worked across all websites to allow the user to never have to type in, or remember, a password again.

In 2015 Splikity launched, sales were modest but reasonable in the first few months, but then Chad saw an open-casting call for shark tank applicants. The brothers knew that in order to grow their brand of security software in the crowded and competitive sector would require an injection of funding, and the help of a business mogul could propel them to early success. They were accepted to appear on the show and eventually got the chance to pitch to the sharks in October 2015.

When Chad and Doug entered the tank they dressed to impress, in matching black-tie outfits. ‘Dressed for Cocktails’ Barbara Corcoran remarked as they walked in, but this party wasn’t going to be too much fun for the Splikity entrepreneurs.

The pair introduced themselves, and Chad began the pitch by running through a situation that’s familiar to us all. The inconvenience and trouble that a forgotten password led to. Doug took over and explained that it needn’t be a problem any more, with Splikity. He told the sharks that Splikity was software that would store all of a users passwords for them, securely and safely, and it would work on all sites. It worked on all of a customers devices, and it would synchronize those devices so that Splikity worked anywhere, on any device. The pitch ended with Chad asking the sharks which of them was willing to ‘Attack the password problem, and join Splikity’.

Kevin O’Leary is possibly a man who forgets a password once in a while, but he couldn’t fail to notice that the Clark brothers had forgotten something themselves, ‘You’ve forgotten to ask for any money’, he observed.

A momentary look of shock appeared on the brothers faces, but Chad was quick to recover, ‘We’re getting to that’, he explained, ‘We’re looking for $200,000 in exchange for 10% equity in the company’.

Mark Cuban inquired who had come up with the design for Splikity. Doug told him it had been him just him and Chad alone. Mark Cuban quickly asked what their security background was.

Doug looked momentarily lost, and admitted, slightly hesitantly, that the brothers didn’t have a technology background. Mark Cuban, who along with Robert Herjavec, has the most technology experience amongst the sharks, had heard enough. ‘I’m out’ he announced, and Doug looked shocked at the news.

‘That’s negative’ Kevin O’Leary suddenly remarked to Mark Cuban, seemingly enjoying the sudden tension in the tank. Mark was quick to point out that security was not an easy subject. Doug countered that people could learn the secrets of the industry, but Mark was far from convinced. He asserted that there were hackers seeing Splikity for the first time, and they would love it. Doug attempted some damage control, but Mark’s objections were clearly very seriously made, and his negativity was influencing the other sharks.

Kevin pointed out that the sharks had an expert in the security field, in particular Robert Herjavec, who sold security systems to giant companies. Kevin advised the brothers to be extremely careful, as they were ‘About to get fried’. Lori Greiner felt that Kevin was perhaps being overly harsh towards Doug and Chad, she told Kevin to ‘Give them a chance’.

Mark Cuban mentioned his involvement with ‘Cyberdust’, an application he had invested in that was constantly involved with security issues. Doug attempted to address Mark’s comment, but he didn’t get very far before Robert Herjavec finally joined the conversation. Robert told the brothers that the security industry didn’t work the way they thought it did. The problem of passwords had been around for many years, and it wasn’t a ‘Flighty’ subject, the rest was left unsaid, but Robert’s implication was clearly that he believed Splikity was a very flighty solution.

Once again Doug attempted to explain the unique benefits of Splikity. He and Mark Cuban discussed the technical considerations of the software, but Mark remained hugely unimpressed. Doug insisted the product was unique, but to Mark there was nothing special about it, it was simply ‘The industry standard’ as far as he was concerned. Robert Herjavec was equally unimpressed, and things were looking bad for the Splikity entrepreneurs.

Lori insisted that her years of experience in retail, had taught her that women would respond differently to a product than men. She told Robert that she wanted to hear more about the product without the brothers being distracted by Robert and Mark objecting. Barbara agreed that she too was interested in hearing more about the product, but Robert found the whole thing ridiculous, he told Lori than technology wasn’t a gender specific issue, and the tension in the tank ramped up another notch.

The brothers took turns trying to explain how their product had been specifically designed for the non-technological customers out there, rather than experienced operators like the sharks, but once again Robert Herjavec jumped in, trying to pin the brothers down on exactly what is was that made their product unique. Eventually after even more probing from Robert and Mark, Doug admitted that Splikity wasn’t actually unique, but it was the simplest password protection software available.

Eventually Robert Herjavec had heard enough. He told Doug and Chad that although their idea was fundamentally sound, the actual functionality of the product was full of potential problems, largely due to the inexperience of the brothers in the technology industry. Robert believed the project was ultimately doomed to fail, and he was out.

Barbara Corcoran was not technology minded, and she was happy to admit it. She told the brothers that she didn’t understand what made Splikity so special, and because she didn’t understand it she would be highly unlikely to ever make any money from it, and with that Barbara was out. Lori Greiner quickly dropped out too, for similar reasons, telling Doug and Chad that what she didn’t understand quickly, wouldn’t be understood quickly by customers either. Although she believed Splikity could help lots of people, she didn’t have any interest in investing, and Lori was out too.

With just Kevin O’Leary left, things were looking dire for the Splikity brothers, but Kevin had a last-minute offer for them. He told Doug that he was a ‘Huge’ brand, and he believed he could help the company grow, but with the amount of value he would bring to the business, it was going to cost a lot. Kevin offered to make the $200,000 investment, but in the form of venture debt. Kevin would lend the money to the business, and receive 10% of the profits until $600,000 had been repaid. From that point on he would take 5% equity in the business because ‘I’m Mr Wonderful’.

The brothers clearly didn’t find their only offer too attractive, and after several long moments, while they were still fending off objections from Mark Cuban, they thanked Kevin, but refused his offer. The pair left the tank without a deal being made.

Splikity Now In 2022 – The After Shark Tank Update

Chad and Doug were understandably disappointed after the show. They felt that they weren’t given enough time to talk about the product and that the sharks had missed out. Despite that, they didn’t seem to put that much effort into pushing the product. Within a year of the segment airing, things remained the same. By 2019, the app had only been downloaded 1,000 times, which is considerably low, especially when you consider the Shark Tank effect.

In fact, their social media accounts—including their Instagram and Twitter—have pretty much been untouched since they were on the show aside from the odd news item about cyber security. For example, they had posted about Mark Zuckerburg and how he had allegedly got his Facebook account hacked back in June 2016.

As of 2022, the app (as well as their website) is still up and running. However, it doesn’t seem to be all that popular. For one thing, it only has two reviews on the iOS app store. And on Google Play, it has a measly 2.7-star rating. Looking at some of the reviews, many people seem to agree that it’s a mistake how there’s no free trial—that you must pay to use the app. Not only that, but some people have actually run into issues where you can’t go to the next step after signing up, which renders the whole thing useless.

Outside of Google Play and the iOS App Store, there hasn’t been much discussion about the app. Perhaps people simply don’t know about the app?  Another possibility is that users are simply unwilling to pay for the service, which costs $4.99/month ($4.17/month if you pay annually) when there are other, more well-known, and cheaper alternatives out there (some are even free).

In fact, many tech companies have actually criticized the app, saying that it’s actually a security risk and that people’s passwords can easily become compromised in one go. In defence, Doug reiterated that that’s not true and that their customers’ passwords are safe.

What is Doug up to now? We’re not too sure. All he has listed on his LinkedIn page is that he’s the co-founder of Splikity, which is still listed as active on the site. Considering the app’s popularity, or lack-off, however, he probably does work a day job and that it’s just not listed.

As for his brother Chad, it’s even more of a mystery seeing as how he doesn’t have a LinkedIn page altogether. Our best guess is that, like his brother, he’s gone back to his day job.