What is Anthony Kim Doing Now? See What Happened to Him 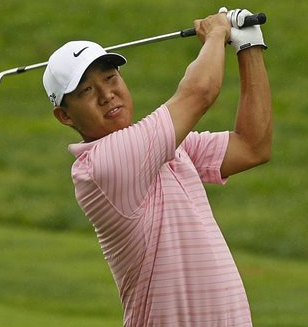 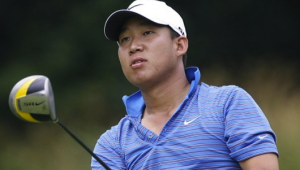 Anthony Kim is an American professional golfer who has three PGA Tour wins, a Ryder Cup, and a Presidents Cup. He is a Korean American who was born in Los Angeles, California on June 19th, 1985. He attended the University of Oklahoma where he met his future caddie, Brodie Flanders, and soon after he was part of the winning USA team in the 2005 Walker Cup. He then went on to start his professional career, where he had great success. However, he has not participated in any professional golf events since 2012, after a devastating injury. Many are probably wondering, what happened to Anthony Kim? Where did this once promising young golfer disappear to? He currently resides in Dallas, Texas, not playing golf even at a recreational level. The question is: will he ever play again?

Kim turned professional in 2006, and shortly after he finished tied for second in his first PGA Tour at the 2006 Valero Texas Open. He then earned his PGA Tour card through the qualifying school for the 2007 season. He had a strong start and joined the top 100 in the Official World Golf Rankings in May of the same year with his four top 10 finishes during his rookie year. In the 2007 U.S. Open, he shot a final round 67, which earned Kim a tie for 20th place. His 67 was not only the lowest for the round, but also the second lowest for the tournament. It was clear that Kim was dripping with potential.

He finally broke out in May 2008, where Kim won his first PGA Tour tournament at the Wachovia Championship, where he defeated former British Open champion Ben Curtis by five shots. His 16 under par 272 total was the lowest score in the tournaments history (remember that in golf the lower the score, the better the score). Kim won over a million dollars for his victory over Curtis, and he moved up to number 16 on the world rankings.

In July 2008, Anthony Kim won another PGA Tour, his second, at the AT&T National, defeating Fredrik Jacobson by two shots. The victory was meaningful for Kim, as it was hosted by the man who was the last person to win two PGA Tour tournaments in row before Kim: Tiger Woods. This win pushed Kim up to number 14 in the world rankings, and some were already calling him the next Tiger Woods. He then went on to have strong finishes in the FedEx Cup events, which pushed him into the top ten of the world rankings, at number 6. Anthony Kim had finally become a superstar. 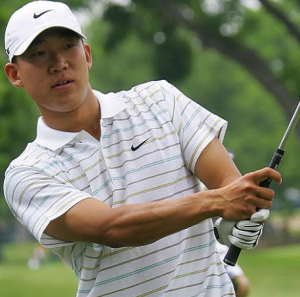 After a superb performance during a 2010 tournament, Kim was interviewed post game.

He was asked if he was confused with himself, and what the change was. He had just had an incredible performance, greater than his most recent ones. His response was that he had been angry with himself lately. His stroke was off, along with the rest of his form. He said that he was getting angry during the tournament, but he ended up exceed his expectations. He was close to getting over par, but luckily he ended up going above par. He said that the fact that he persevered and stayed tough in the heat of the moment helped him gain his chances of winning the tournament. Before the big performance, him and his coach studied film, looking to see holes in his play. They had to find out what was causing Kim’s frustration. Then, they found it. Kim had to improve his technique. They did some strength exercises, and once Kim got to the golf course, he started to hit the ball and go with what was happening. He realized that although he wasn’t hitting it as far as he was used to, he could still have a chance at winning as long as he didn’t let it get to him. He continued to do that, made a few putts and strokes, and hoped for the best.

Kim continued to have strong performances over the years, and stayed in the top ten of the world rankings for a long time. He even appeared on the show Shaq Vs., where he teamed up with Shaquille O’Neal against fellow golfer Bubba Watson and NBA Hall of Famer Charles Barkley in a five hole match. Kim and Shaq (Team Shaq) won.

Suddenly, Anthony Kim’s superstar career took a sharp turn. In July 2012, Kim had surgery on his Achilles tendon after he injured it in his left leg. He was expected to sit out for 9 to 12 months, but he hasn’t played since. He was eligible for the 2013 season with a Major Medical Exemption, but he has failed to play a single tournament since. In April of 2014, the Golf Channel reported that Kim no longer plays golf, not even for fun. If he wanted to play again on the PGA tour, he would have 16 starts and $613,550 to regain his tour card. However, it appears as if that won’t happen. A recent article from Business Insider, written by Tony Manfred, suggests that Kim could be done golfing professionally for good.

Another article, this one written by John Hawkins from Golf Channel, has thoughts close to the ones Tony Manfred of Business Insider had. 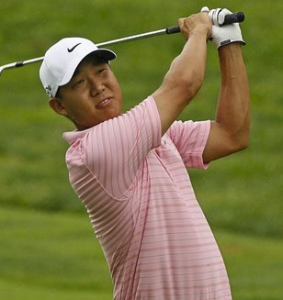 It’s a sad story; Kim was one of the most prominent, successful, and promising golfers of the past decade. At the young age of 30, he still has a chance to make a comeback, but for now, no one should get their hopes up. He was considered to be the next Tiger Woods; a staple in the golf industry for years to come. However, injuries ended his career prematurely. This happens all the time in professional sports, including the NFL, NBA, and even the NHL. Unfortunately, it had to happen to Kim. We may never know just how dominant he could have become. There is still hope that he can return to the sport, but it is not a thought worth keeping one’s hopes up for.

Bridget Rogers
Bridget Rogers is an independent freelance writer based out of Madison, Wisconsin. Bridget's work can be found on a variety of sources in both online and print media.
RELATED ARTICLES
Sports