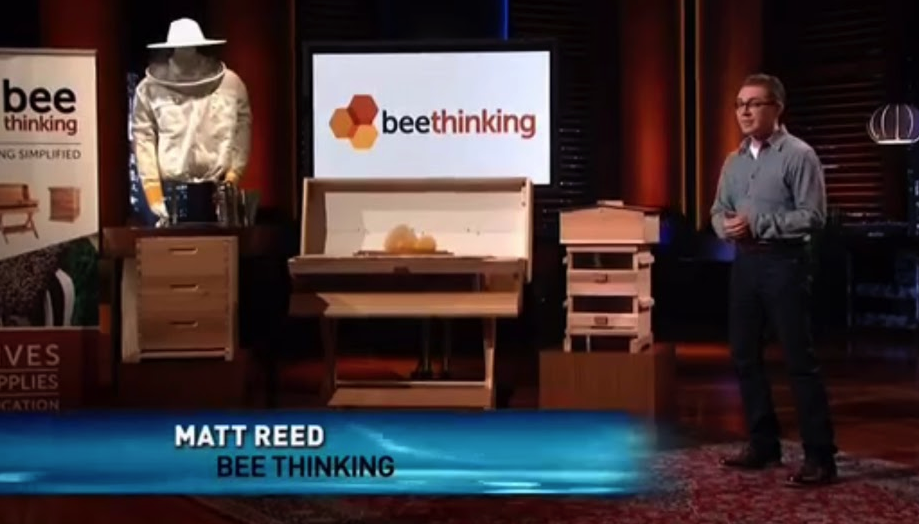 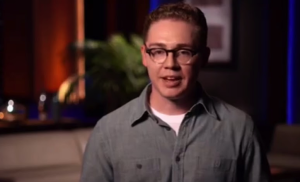 Matt Reed is from Portland, Oregon. He lives there with his wife called Jill, and together they have started a business around the honeybee. Matt states that honeybees are important to human beings because they are responsible for about one third of the pollination of Earth’s food supply. He states that, without bees, most food that humans enjoy would not exist. Matt continues by quoting Albert Einstein, who said that if bees disappear from the face of the Earth, men would have only four years left to live, and unfortunately that time could be near. Matt states that in 2006, beekeepers noticed a huge loss in honeybee population and they are not sure why honeybees are dying. They think it is a combination of pesticides, habitat loss, stress and other factors, which is called the Colony Collapse Disorder.

Matt continues by saying that he wanted to do his part to help and save the bees, which is when his business was born. He says that he had a stable job in a technology field and it was too difficult to balance both of them, so he quit his job and started focusing on bees only. Now he and his wife Jill are expecting their first baby, and they can barely make ends meet. Matt states that this is what they are meant to do, and with the Sharks help, they can turn this business into something that is going to change the world.

“Matt Reed walks confidently and stands in front of the Sharks”

Matt Reed starts his presentation by introducing himself, and telling the Sharks that his business is called Bee Thinking. He states that he is looking for an investment of four hundred thousand dollars in exchange for a ten percent stake in his company. Matt continues his presentation by saying that, six years ago a honeybee flew into his kitchen, which his wife noticed and asked him to rescue the bee. Matt says that he fed the bee some honey, who gained energy and he took it to the front porch, after which the bee flew off.

At a later state, when Matt’s wife was leaving for work, she noticed dozens of bees out on the screen door, trying to get in the house. The bee that Matt rescued had told its friends that there is honey at the house. At that moment, Matt was stung by the fascination for honeybees. Matt states that after this experience, he went into his garage and started building a various different beehives, and he started blogging about the process. He states that immediately, people all over the country were asking to buy Matt’s beehives, because he was making alternative designs, from the highest possible materials. He states that he knew he was onto something, and that soon, he couldn’t build beehives fast enough, because the demand was too high. Matt states that today, his company ships thousands of beehives all over the world.

“Matt Reed asks the Sharks, who is ready to create a buzz with Bee Thinking”

“Lori Greiner asks Matt what his sales are”

Matt answers the question by saying that they have made a hundred and twenty thousand dollars in profit, this year alone.

“Mark Cuban asks Matt Reed if people are buying beehives for their kids, and just putting them in their backyards 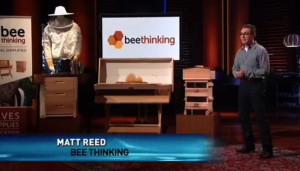 Matt answers the question by saying that people get into beehives because they want to help somehow. He states that honeybees are dying all over the world and about a third of the Earth’s food supply, depends on them.  Matt states that it is critical that they keep bees alive, or else all of humanity can be at risk of extinction.

“Mark Cuban asks how much it costs to purchase one beehive”

Matt answers Mark’s question by pointing at one of his beehives, and states that it costs three hundred and sixty dollars, and it costs them about a hundred and fifty dollars to make.

Kevin O’Leary states that he has experience in beekeeping. He says that his grandmother used to own an apple orchard, and she placed beehives throughout the whole apple orchard, because it promotes crosspollination and creates more apples. The process of tending for them involves extracting the honey and profiting from it.

Matt points at the beehive in the middle and states that it is their flagship beehive. He tells the Sharks that you have to put in ten thousand honeybees, and they will start producing honeycombs, after which you can take the honey out and eat it, without processing.

Daymond John asks Matt Reed where people can buy the bees, to which Matt responds to by saying that you can buy bees at their company, or any other company that sells them.

Matt Reed continues by saying that their company has growth, and they have been growing rapidly. He says that they also have a market that is growing, and that you could ask any bee supplier, they will say that it is growing.

Lori Greiner asks if Bee Thinking is his full time job, to which Matt responds to by saying that he used to be in technology, but now he and his wife quit their job, and start working on Bee Thinking full time. He says that they are drawing about fifty thousand dollars in salary for their own, and that he has left his comfortable and stable job, just to follow his passion. Matt also states that his whole life is basically at stake, and that he has seven employees, whose lives are also at stake.

Kevin O’Leary says to Matt that he has proven he has a business and that he got sales, but he asks Matt, when his business is going to be worth four million dollars. Kevin states that Matt is a very long way from there now. Kevin also states that bees represent immortality around the world, in many cultures and that he have to be immortal, just to be able to get his money back from Matt, and that is a problem. Kevin O’Leary states that he is out.

Robert Herjavec compliments the beehives, and asks Matt how many beehives people usually purchase, to which Matt responds by saying that the average sale is around two hundred and ten dollars, and thirty percent are repeat customers.

Robert Herjavec says that he really loves that Matt has got everything on the line. He states that Matt has quit a good job, his wife is pregnant and he has got seven employees. Robert states that he has been trying to think of what Matt would do with the four hundred thousand dollar investment, and his problem is that Bee Thinking could not make enough sales, and Matt didn’t state that, if he had more money, he could have more inventory and sell more. Robert Herjavec says that he is out.

Daymond John states that, if he would invest four hundred thousand dollars, it would take years for him to get his investment back and make a profit. He says that Bee Thinking will take a lot of time to scale up, and although he is definitely a customer, but he won’t be investing and states that he is out.

“All the Sharks wish Matt Reed good luck with his business”

At the end interview, Matt Reed states that Bee Thinking means everything for himself and his family. He has given up everything to make it work and they are going to keep growing with or without an investment from the Sharks, and they will continue to succeed.

Matt was definitely struggling with his company’s finances, and also with his personal finances due to him and his wife quitting their regular jobs. He had put in a lot of his own money into Bee Thinking, and needed an investment from the Sharks to be able to scale up his production. The product that he is selling the most is called the Top Bar Hive, and he makes the most profit out of them. There is no mention of Matt’s products being the best or worst on Shark Tank, although many of the Sharks really liked the idea and his products. The reason why the Sharks did not invest is because of having either no interest in bees and honey, or due to the fact that they think that Bee Thinking is too small. 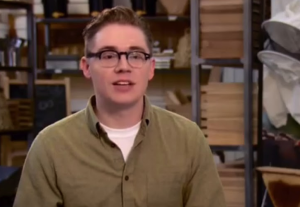 Matt and his company have been continuing with designing new beehives and other products, and you can check them out and purchase them on the Bee Thinking website; http://www.beethinking.com/. Customers can leave reviews on the website, and there are many five out of five star reviews. Most of the customers absolutely love all of the products, and they appreciate the free shipping. It is easy to see that there are many repeat customers, which really helps Matt to make a profit.

Bee Thinking definitely did not fail as a company, because they have been selling beehives for years now, and a lot of people seem to like them. At this moment, they might have financial problems, but over time they can solve them by scaling up the production. His products are very popular, especially among environmentalists and people who simply would like to help the bees out.