Types of Decks in Hearthstone – All Four Deck Types 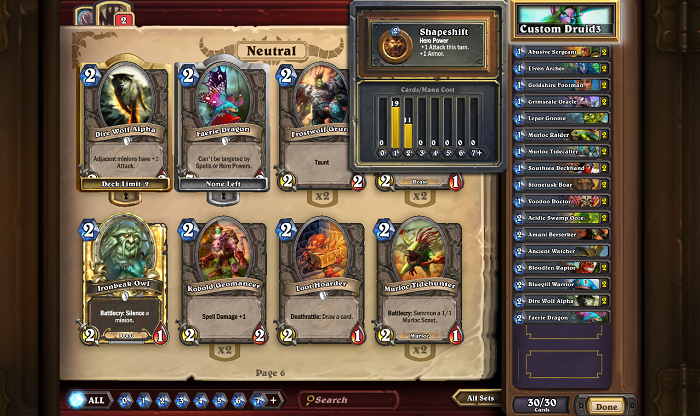 In Blizzard’s popular digital card game, Hearthstone, there is no end to variety. Most who are familiar with the game know that decks are divided into classes, with unique available cards and special hero powers. But beyond this, there are certain archetypes that transcend class boundaries. Understanding how each of these deck types functions is key to building your own decks and “climbing the ladder” of competitive players.

The aim of both of these decks is to seize the board as quickly as possible and win before the opponent can find an answer. For these deck types, low-cost cards are prioritized because they can be played early for 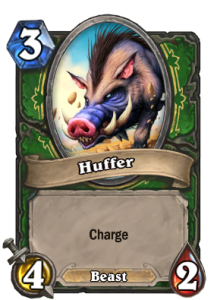 better pressure. They typically can take out “greedier” control decks that don’t run enough early options to combat aggro lists, but they often suffer against mid-range decks with taunt and heal effects.

For all their early strength, these decks tend to fizzle when the game stretches out. They fall victim to drawing weak cards too late, so they are unable to challenge the imposing minions of control decks. Their other weakness lies in “board clear” or “area of effect” cards that can deal small amounts of damage to multiple targets.

The difference between aggro and tempo lists can be subtle, but there is one key distinction. Aggro decks often have a singular goal in mind, and that is to hit the opponent (“go face”) and kill their hero. Tempo decks, on the other hand, want to squeeze every ounce of value out of their early game cards, in order to kill the opponent.

Moving up the “mana curve” (meaning the relative mana cost of a deck’s cards), mid-range lists are weighted heavily towards the center, with an abundance of cards costing around the 3-6 mana mark. While aggro and most tempo decks want to overwhelm the opponent before they gather counters, mid-range decks are prepared to answer them blow-for-blow.

Mid-range decks are often characterized by an abundance of “sticky” minions (minions that are difficult to neutralize due to their effects or stat distributions) and cards that are especially “valuable” (meaning they contribute very effectively to taking board control.) Mid-range decks are notorious for their consistency and reliable mana curves because they often have a powerful play every turn.

While mid-range decks are jacks of all trades, they are often also a master of none. Their match-up spreads against other decks tend to be among the most even across-the-board, but there are simply times when they can’t answer an aggro deck’s early aggression or can’t keep up with the incredible card value of control decks.

Control decks come in all shapes and sizes, but the main principle is to win by being the reactive player. If aggro and some mid-range players want to play cards and challenge the opponent to respond, control players will take that challenge. Efficiency is the name of the game: the control player always wants to use one card to kill two, with the sentiment that, if this goes on for long enough, they can grind out a win.

Beyond that, it is difficult to paint the archetype with a broad brush. Priest decks are notorious for their strong Hunter (the most naturally aggro class) match-ups due to a combination of abundant healing to 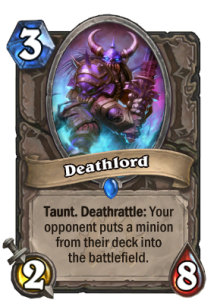 neutralize the Hunter’s hero power and a number of board clears in the mid-game. Even a lucky Hunter player that manages to get Huffer from the Animal Companion card may have difficulty keeping up with the Priest’s hero power. On the other hand, Control Warrior decks can struggle against aggro because their method of gaining early-game value is weapons, which means they are required to take excessive damage early on.

Fatigue decks are a slightly different animal, perhaps best described as a combination of control and mid-range. While they sacrifice some of the very expensive cards of control decks, their goal is still to last until very late and kill the opponent with a game mechanic called fatigue damage. When a player runs out of cards in their deck and attempts to draw, they take damage equal to the number of times they have “fatigued.” In other words, the first fatigue draw deals one damage, then two, and so on. By using cards that force the opponent to reach fatigue first (such as Deathlord), fatigue decks let the opponent do their work for them!

Combo decks are a bit like the junk drawer of Hearthstone. Is an Oil Rogue tempo-oriented? Sort of, but they are often content wasting a turn or using a card sub-optimally, if it means furthering the game plan. Is a Malygos Handlock mid-range? You could say that, but their game plan has an extra component.

In short, combo decks seek to make use of specific cards that are often both extremely powerful and situational. They are fine-tuned to make the greatest possible use of these cards, often to win the game in one fell-swoop.

The most infamous of these decks made use of two cards: “Gadgetzan Auctioneer” and “Leeroy Jenkins”. The objective was to abuse the Auctioneer’s ability to quickly draw through the deck, then play Leeroy Jenkins with several other spells to do over twenty damage in one turn. Blizzard decided this was too powerful and weakened both cards accordingly, but new combo decks pop up now and then.

Combo decks are often the most skill-intensive decks because they require thinking about the game in a whole new way. A combo player must constantly be aware of exactly how much damage they need to kill the opponent, the cards needed to do so, and how to accumulate and conserve them. Several combo decks are currently among the most competitively viable, including Freeze Mage, Murloc Paladin, and Oil Rogue.

Where do I begin?

If you’re a beginner, or even an intermediate player, this all can seem a bit daunting. My advice is to start by watching professional Hearthstone live streamers. Observing how currently powerful decks ought to be played can do wonders for your own game, and many are happy to answer questions or give advice.

After that, play, play, play! This will help you to understand the intricacies of all kinds of situations and give you a chance to test your creations. It can be intimidating, but the nature of card games is losing at least once in a while, so don’t be afraid. Down the road, you’ll be grateful for the experience. Above all, don’t forget to have fun!