What Happened to Eric Stoltz – 2018 Update

Eric Stoltz, most known for his portrayal of Rocky Dennis in the biogrpahical drama film Mask, has been in movies and TV almost continuously the 1985 hit. Recently, Stoltz has transitioned to working as a director. What else has the method actor been up to?

Eric Stoltz was born in 1961, the son of a violinist and school teacher. Both of his sisters pursued the arts (as a singer and author,) and Eric followed in their footsteps, playing piano for a musical theater in Santa Barbara.

Eric Stoltz had a minor role in Fast Times at Ridgemont High, which introduced him to the writer and director of the film, Cameron Crowe. Crowe took a shine to Stoltz, promising him a role in all of his future films. With that, Stoltz was able to continue his Hollywood career, appearing in Crowe’s next four films. (The Wild Life, Singles, Say Anything…, and Jerry Maguire.)

When Robert Zemeckis was choosing who he’d like to play the protagonist in Back to the Future, he initially wanted Michael J. Fox. Fox was busy with Family Ties, his breakout sitcom. So, in 1984, Eric Stoltz was cast as Marty McFly. There was almost four weeks of filming done with Stoltz before the director and fellow actors felt certain that Stoltz’s performance wasn’t going to be appropriate for the film. 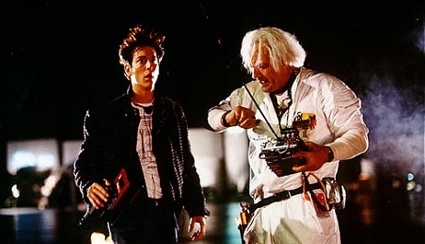 Eric Stoltz in Back to the Future

It wasn’t that Eric Stoltz was doing a bad job as Marty McFly; he just wasn’t funny. Eric Stoltz, at least at that point in his career, was working as a method actor. He insisted that people refer to him as Marty even when he wasn’t on set, and during a scene where Marty pushes Biff (Thomas F. Wilson,) Stoltz insisted on actually shoving the actor, which left him with bruises.

Lea Thompson, who played Marty’s mom, said “It was a time when we were emerging from the ’70s. All the young actors wanted to be like De Niro and Pacino, which was good in a lot of ways… But it was not the right movie to behave like that. Eric had such an intensity. He saw drama in things. He wasn’t really a comedian, and they needed a comedian.”

Eventually, Zemeckis convinced Spielberg that they needed Michael J. Fox. Filming continued as though nothing had changed for another week, while Fox negotiated splitting his time between the film and Family Ties. Footage of Stoltz’s performance remained in storage until the film’s 25th Anniversary edition was released, which included a few of Stoltz’s scenes.

In many ways, it might be good that Stoltz didn’t continue working on Back to the Future. Instead of being in theaters that year as Marty McFly, he was presented to audiences as Rocky Dennis in Mask.

The film was based on the life and death of Roy L. Dennis, who was born with the extremely rare disorder lionitis. Mask won an Academy Award for Best Makeup, with Cher (who played Rocky’s mother) and Eric Stoltz each receiving Golden Globe nominations for their performances. 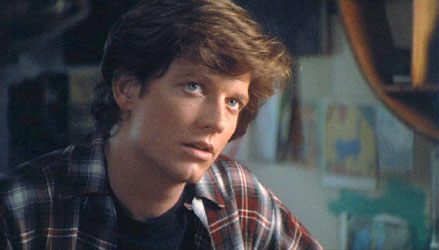 Stoltz in Some Kind of Wonderful

In 1987 he was cast alongside Lea Thompson again, only this time both performers were suited for their roles. In Some Kind of Wonderful, Eric Stoltz is a involved in a love triangle between Thompson’s character and a tomboy played by Mary Stuart Masterson. The film was created by John Hughes, who was unsatisfied with his earlier Pretty in Pink. Some Kind of Wonderful, also directed by Howard Deutch, was praised by critics and was a commercial success, and is still considered one of the stronger romance films of the late 80s.

In 1989, Eric Stoltz was nominated for a Tony Award as Featured Actor for his performance in the Broadway revival of Our Town. Throughout the 90s, he performed on- and off-Broadway. He appeared in The Importance of Being Earnest, The Glass Menagerie, Three Sisters, Arms and the Man, and Sly Fox, among other less notable shows.

In 1992, Eric Stoltz had a small role in The Waterdance, and the next year marked his first participation in a film from off-screen. He produced Bodies, Rest & Motion, and in 1994, Sleep with Me. That same year he appeared in Pulp Fiction, as Lance (the guy who provides Travolta’s character with the adrenalin to revive Uma Thurman’s character.

Also in 1994, Stoltz started appearing on television, first in Mad About You, and later that year in Chicago Hope. Stoltz continued to appear in Mad About You until 1998. The next year he starred along Helen Mirren in The Passion of Ayn Rand, made for Showtime. The film was critically acclaimed, with Helen Mirren winning an Emmy for her performance.

In 2001-2002, Eric Stoltz had a recurring role as an August Dimitri, the poet-teacher in ABC’s Once and Again, where he also directed an episode. He was also nominated for a Daytime Emmy for his direction of the Showtime movie My Horrible Year!.

In 2003, Stoltz had his first leading role in a TV show with Out of Order. The dramedy miniseries, which aired on Showtime, was well-received by critics, being compared to HBO’s The Sopranos and Six Feet Under. The show only produced six episodes, however.

Eric Stoltz had a small role in the 2004 psych-thriller The Butterfly Effect, returning to television to guest-star in the NBC sitcom Will & Grace. In 2005, Stoltz directed the highest rated episode of Law & Order that season.

Eric Stoltz’s first successful lead TV role was in Caprica, a prequel set 58 years before Battlestar Galactica. The series premiered in 2010 on Syfy. A full season was produced, though only the first 14 episodes were shown before the show was cancelled and pulled off the air. The show had been well-received by fans of the original series, but failed to cultivate the same energy and sense of urgency which had kept Battlestar Galactica moving forward. 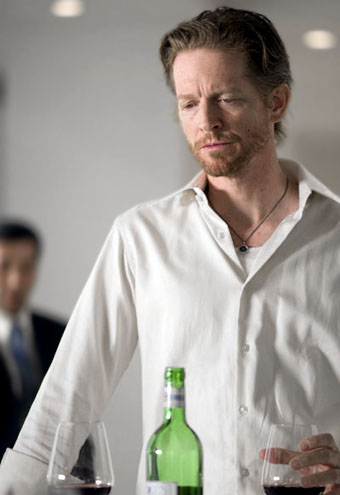 Stoltz as Daniel Graystone in Caprica

While Caprica was airing, Stoltz had moved back to directing, this time for Glee. He directed a total of 12 episodes between 2010 and 2014. During that time he also directed at least one episode each of Off the Map, Californication, White Collar, Nashville, and How to Get Away with Murder. Most recently, he’s directed several episodes of the Beltway drama Madam Secretary.

He hasn’t been entirely absent from the world of film; in 2011 he produced and starred in Fort McCoy, alongside Kate Connor, who also wrote, directed, and produced the film. The film was shown at multiple festivals, but has not yet found a distributor.