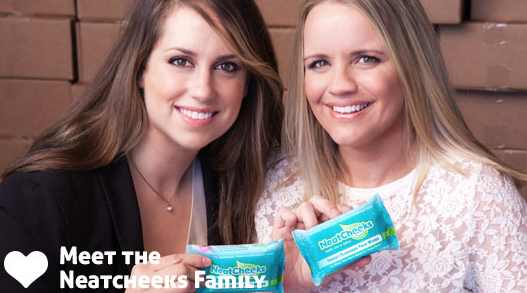 Mothers from all around the world understand the pain and struggle that comes from battling with their children to get their dirty faces clean. That is why mothers Julia Rossi and Danielle Stangler put their heads together in order to create a face wipe that would make everyone’s life just a little bit easier. First struck with the idea after asking her husband to dip a napkin in juice to clean their daughter’s face off, Danielle came to the sudden realization that providing kids with something sweet will instantly earn their compliance. Shortly after making this brilliant discovery, Danielle went to her dear friend Julie in hopes of starting a revolutionary business together. 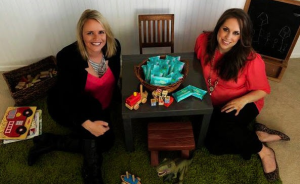 Driven to make this product a success, Julia and Danielle thought long and hard while coming up with to components to make NeatCheeks. They needed something sweeter and less pungent than other wipes that contain a chemical type of aroma to them. Finally, after doing a lot of research, they found their solution in Stevia. Stevia is a form of natural sweetener that is soft skin friendly, making it the perfect ingredient for these flavored baby wipes.

After the creation of the NeatCheeks company, Julia and Danielle were able to supply their product to places like Amazon and a few locally run baby stores. However, they wanted to expand their business even further in order to offer more mothers a safer, more eco-friendly option for their children. That is why the duo went to the Shark Tank, hoping to get some funding and advertisement for their business.

After entering the Shark Tank, Julia and Danielle introduce themselves and state that they are looking for a $150k investment in exchange for 20% of their company NeatCheeks. Once the price is layed out on the table, they begin to explain how their product is both unique and marketable. They begin by presenting the Sharks with a video of a “typical” toddler cleanup session. While the father attempts to wipe the child’s face off, he fusses and pulls away each time the baby wip gets close to his face. Julia and Danielle claim that their soft and sweet baby wipe will eliminate all the hassle that comes with cleaning up a messy face. NeatCheeks are gentle enough for sensitive skin and, because they are slightly sweetened, a good way to clean your child. As shown in their next video, the same child sits quietly and allows his father to wipe his face off 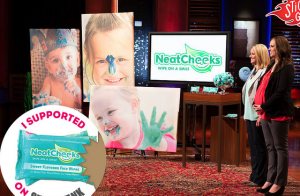 without any issues at all. Shortly after the video, samples of the product are handed out to the Sharks for them to try for themselves. Each of them dab the napkin onto their lips and seem pleasantly surprised by the taste.

Robert Herjavec is the first to ask about their sales, to which they respond by saying their product is supplied to nearly 40 retail locations. In two of the Walgreens stores they supply, they performed a 90 day test which did extremely well because they had to reorder after 30 days. NeatCheeks are made for $.72 and are sold for $3.99. Kevin O’Leary is surprised by the pricing because he claims that it seems to be pretty expensive for a baby wipe.

Lori Greiner asks what the price for a normal wipe would be, which is about $1.99. Julia and Danielle want to bring the price for their product down, but the reason NeatCheeks costs so much now is because low volume production. The goal is to lower manufacturing cost to $.53, but even that would not match competitors prices. However, even though they are a slightly more expensive product, theirs is not the most expensive line out there. And, in addition to still being affordable, NeatCheeks takes away all the struggles that comes with cleaning up a child’s face which puts them at a higher advantage than other leading brands.

In 2015 they made about $4k in sales, which shocks O’Leary. By the end of the year though, they anticipate making $90k to $100k in revenue after launching their product in a trade show during September. O’Leary asks what will keep larger companies from also infusing Sevia into their own products, and Danielle tells him that they have a pending patent on their product. O’Leary says that he does admire their product, but does not believe that they will outshine other competitors on the market because they do not have the patent they need to keep their product safe from being mimicked. He is the first to pull out, then followed by Mark Cuban who believes it would take them too much time to become a fully operational company.

Herjavec is the first to show any real interest and asks what they would do with $150k if they received it. They claim that the money would allow them to go into the business full-time and would take $50k to pay themselves each for the upkeep of their own households. Not impressed with their answer, Herjavec tells them that they need to pay for their business first instead of themselves, and then also decides not to invest. Barbara Corcoran suggests that they both go out to find full-time jobs while they manage their company so they have the funds they need for family upkeep. Greiner then steps in to say that she will invest $150k for 30% of NeatCheeks if they get the patent for the product. However, Corcoran also makes an offer of $150k for 25% if they agree to make a cherry flavored baby wipe. Greiner decides to match that offer as well, so long as they still get the patent for NeatCheeks. Julia and Danielle assure her that they will have no problem getting it, which convinces her to drop the contingency. After some brief discussion though, they decide to accept Corcoran’s offer instead.

NeatCheeks After Shark Tank – Now in 2018 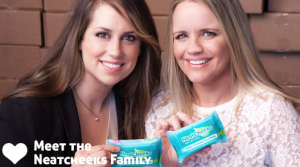 After making a deal with Barbara, NeatCheeks launched successfully and became a very recognizable company. They do have their own website (https://neatcheeks.com/) in addition to being sold in various retail stores such as Babies’R’Us. Despite never having made a cherry flavored baby wipe, their sales are up by a considerable amount and the bundles found on their website are, though still a little on the high side, relatively affordable. Thanks to two innovative mothers, other mothers nationwide have a gentle, all natural way to effectively clean up their children’s faces.