Looking for a strategy to obtain more trophies, to get 3 stars, to loot huge amounts of resources, or to win a war? Then you probably need some good clash of clans strategies for 2018! Check out the updated strategies below to help you out on your conquests!

Use Wall Breakers, then Use Giants

Use at least 2 to 3 Wall Breakers first to destroy the wall, then use your Giants to destroy their Air Defense. Be sure to have a space near the enemy’s Air Defense for this to work well. When all of the enemy’s Air Defenses are destroyed, use all your Balloons focused only on one place, as this will protect them to your enemy’s Archer Towers. When all of the defenses were destroyed by this time, deploy your remaining Wall Breakers for your Wizards to enter. Your Wizards will wipe almost everything in sight, and with some Balloons left in the battle, victory is yours. 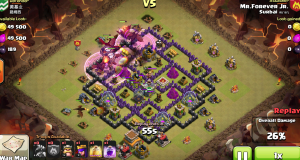 If you’re hunting for Trophies for Town Halls level 7-10, this is a good strategy and a 1 star guarantee. The only drawback is that you need to spend a reasonable amount of Dark Ellixir. First, use Lightning Spells to destroy your enemy’s one Air Defense, then deploy 2 Dragons where the Air Defense is destroyed. Use your remaining Lightning Spell if there’s any Clan Castle troops. If you don’t have any left, then let your Dragon’s splash damage do the work. Now deploy all your Minions for your final assault. Be sure there are no Air Bombs in place or this attack will be ineffective. Your Dragons will take care of any Wizard Towers if there’s one.

Raid to Get 3 Stars Guaranteed

Another good raiding strategy is deploy Giants, Wall Breakers, and Lightning Spells to break in their walls and eliminate their towers with splash damage. Once their defenses are almost destroyed, deploy about 10 waves Goblins to after the resource buildings.

Deploy Archers and Spread Out Giants 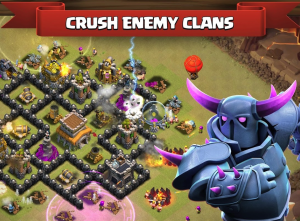 First, deploy your archers (barbarians or giants) to see if there’s any Clan Castle troops. If any, eliminate them with your Lightning Spells. Now deploy and spread out your Giants along with your Wizards behind them. Deploy the Rage spell near your Giants and Wizards, but make sure their inside the enemy’s walls. After that, deploy your PEKKAs and any Hero, then use another Rage spell.

There’s one strategy called B.A.G. attack. B.A.G. means Barbarians, Archers, and Giants. This strategy is very cheap and only requires a short amount of training time. First, deploy 1 Barbarian near the enemy’s Clan Castle to see if there’s any troop inside. If there’s any, deploy your Archers and Barbarians to take care of the Clan Castle troops until they’re eliminated. Then deploy your Wall Breakers to destroy the first layer of walls. Use some Giants to focus on the defenses. Deploy all Giants you have along with the Barbarian King if there’s one, then deploy huge amounts of Barbarians and Archers with some rage or heal spells for to support them

Look for a base with higher level collectors, about 9 to 11, and mines. All of those resources are needed to be in the pumps and mines. Then look for a place next to the Air Defense or maybe far from it. Deploy the Giants, Healer, and Goblins in rows to avoid Mortar damage by pumps and mines.  And if most or all of the resources are looted, get a 1 star. If you got your 1 star, end the battle.

This is only effective against enemies with 2 Wizard Towers (1 on the outside) and 1 Mortar. First, use both your Lightning Spells to destroy the Mortar, then place your entire Wall Breakers in front of the enemy’s Wizard Tower to destroy the wall. Place your entire troops of Giants at the destroyed wall, then place your Archers around the village in 5 groups. Now deploy all your Barbarians near or close to the storages and Town Hall.

Deploy Barbarians to lure out the Clan Castle troops and the Barbarian King, then take them out with Archers and Wizards (around 4 to 5 Wizards). When all of the Clan Castle troops are eliminated, deploy around 20 Hog Riders in just one spot, then use the Healing Spell when damaged. Now that the enemy’s defenses are destroyed, deploy your remaining troops along with the Barbarian King for the grand finale. 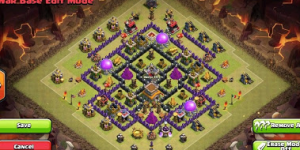 This is another one for raiding. Look for a base with large amounts of elixir, as this is an expensive attack, and avoid ones with areas of open walls. There could be a decoy like Giant Bombs or Spring Traps which renders your Giants ineffective. If the trophy level is high like 20 to 33, then Clan Castle troops are a big threat also. Deploy all your Giants in an area where you can get to the Wizard Tower and Mortars the fastest. Then deploy your Wall Breakers and use your healing spells. If there’s no air defense, you can substitute Archers (preferably 15 of them) for one of your healer. Then deploy 10 to 15 Archers to destroy the splash towers for good measure. And when both of those towers are destroyed deploy the Archers in groups to destroy the defenses in the edge. Now the all of the defenses are destroyed, deploy your Archers around the base. Use your Wizards if in any way your Giants are destroyed and there are still defenses remaining around the base of your enemy.

This one is a very effective strategy that heals Giants to destroy the enemy’s defenses and the Wizards for destroying buildings, but this will cost you around 85,500 elixirs to produce. Spells are optional in this strategy just in case you need them. First, look for the base’s strongest side. If there’s an Air Defense outside the base or near the edge, eliminate them with your Archers. Now send a couple of Wall Breakers to destroy the wall, then send in the Giants along with a Healer. For your final attack, deploy about 10 Wizards (keeping the other 10 in case that’s enough).

This strategy is meant to get you through very tough defenses and enter into the center of the enemy’s base. You can use some Giants in place of PEKKAs, and a Dragon is ideal for the enemy’s Clan Castle. First, place PEKKAs and/or Giants to the nearest Air Defense that is not surrounded or closest to any of the Storage and spread them to avoid splash damage. Then send a couple of Wall Breakers to the walls for the Giants and/or PEKKAs to enter. Deploy a Healer for good measure. Spawn Barbarians and Archers (20 each side) simultaneously for support. When two to three Air Defenses are eliminated, place all your Dragons to a spot where you put your Giants. If you think that the odds are against you, place the Clan Castle troops to the nearest buildings that’s not yet destroyed.