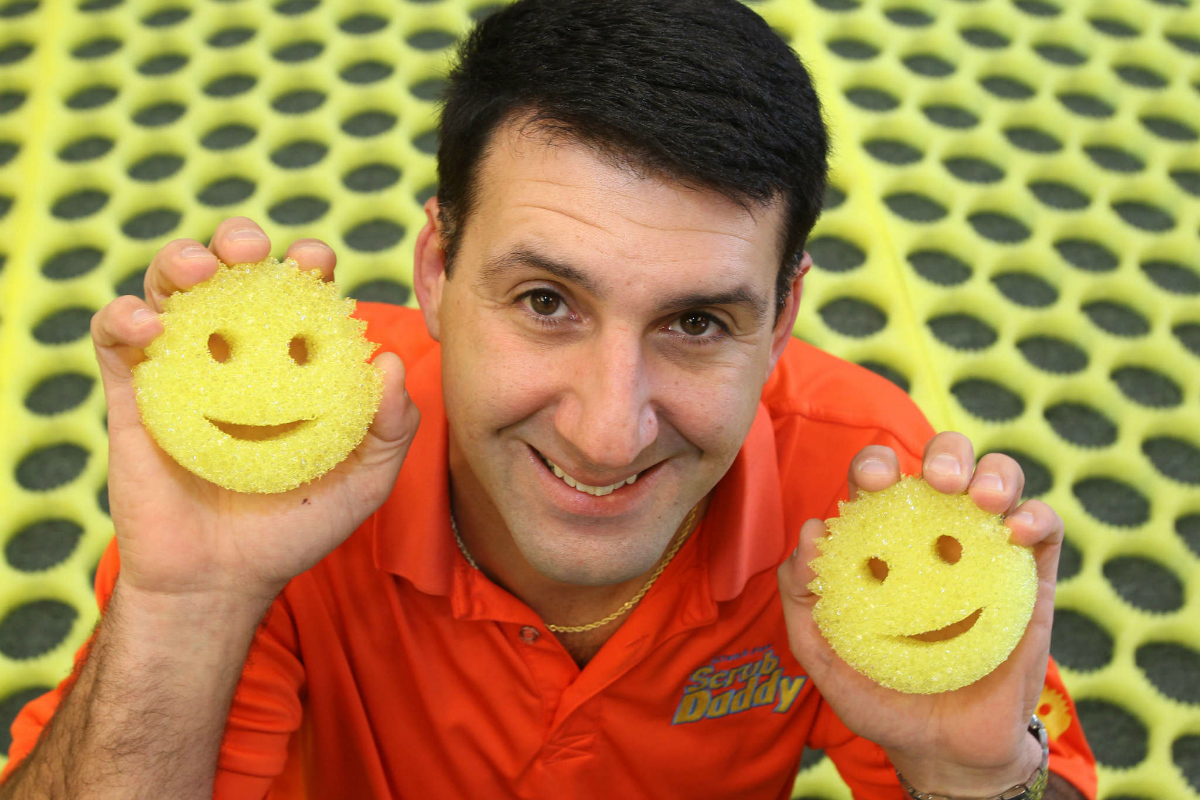 Aaron Krause, from Philadelphia, came to the shark tank in October 2012 with a scrubbing product that he believed would make everyday cleaning easier. Doesn’t sound too exciting does it? Well it did when Aaron shared it with the sharks.

After announcing that he was seeking a $100,000 investment in exchange for 10% equity in the Scrub Daddy business, Aaron launched into a fast paced, almost frantic introduction of Scrub Daddy. He described it as the cutest and most high-tech scrubbing tool in the World. The sharks looked doubtful at that, seemingly unimpressed with what looked like an everyday sponge with a smiley face carved into it.

Explaining that the sponge completely changes its texture when immersed in water of different temperatures, Aaron exhibited this impressive quality by briefly soaking two identical sponges in separate bowls of water, one hot, and one cold. He then demonstrated that one of the sponges remained soft and springy, yet the other had become rock-hard, fully able to support a ten pound weight.

While the sharks were still taking this in, Aaron moved at breakneck speed into a demonstration of the now hardened sponge on a stainless-steel pan and a glass stove-top, removing stubborn stains to great effect, using just water, and without scratching.

The sharks were looking fairly impressed by this stage, but Aaron, who didn’t seem to need to draw breath throughout the demonstration, showed how easy it was to restore the now filthy sponge back to its former pristine state with just a quick rinse of water. He finished off with a demonstration of how the smile, not just cosmetic, but functional as well, could be used to clean both sides of kitchen utensils easily and quickly.

The sharks were impressed by the enthusiasm and quality of Aaron’s pitch and there were appreciative comments from them all when it was completed.

Daymond John commented that the pitch was incredible, and asked if Aaron had samples, which were handed to the sharks. Lori Greiner, the queen of QVC asked where Scrub Daddy was currently being sold. Aaron explained that five supermarkets in the Philadelphia area were selling the product, and it was also being sold from the Scrub Daddy website. Aaron had, in addition, also appeared on QVC three times with great success, being invited back every time and achieving a 30% increase in sales after every appearance. Robert Herjavec asked what the total sales had been so far, and looked impressed at the answer of over $100,000 in only four months.

When quizzed by Kevin O’Leary what the $100K investment would be used for, Aaron outlined his plan to set up his own manufacturing facility, as the current manufacturer would be unable to meet the future demand that he expected his product to have within a suitable time-frame. He explained he had many years experience managing a manufacturing plant and needed a strategic partner to help him open up the retail opportunities for his product.

He was then asked about the cost, which was approximately $1, with a retail price of $2.80. Kevin and Robert expressed doubts at the high-price and Aaron defended it, stating that it was a top-quality product which couldn’t be compared to a cheap low-quality one. After some discussion of sales strategies, Robert dropped out of the negotiations, unable to see a viable market.

Mark Cuban, expressed doubts about the profitability and market for a single product mainly sold through QVC. Aaron countered Mark’s doubts by explaining his plans for a range of associated products that would be brought out in the future, exclaiming at one point ‘you don’t know who you’re dealing with’, which made the sharks smile, but ultimately, Mark was still unimpressed, and also dropped out.

An amazing round of offers and counter-offers.

Kevin O’Leary stepped up with an initial offer at this point, offering Aaron the requested $100K, for 50% of the company, but Aaron didn’t seem impressed with that at all.

Daymond expressed his admiration of the success that Lori had had with QVC in the past, and offered $50,000 in exchange for 15%, but on the condition that Lori and Aaron could agree on a deal for the other $50K that Aaron had requested.

All eyes went to Lori, the clear authority amongst the sharks for this type of product and business model. Describing the Scrub Daddy as a hero, and not a zero, she rebuffed Daymond’s offer with a stinging ‘No offence Daymond, but I don’t need you’. She went on to offer Aaron the full $100K in exchange for 30%, further sweetening the offer with a confident claim that she could get the product sold in stores nationwide within weeks.

Kevin O’Leary, seeing a money-making opportunity slipping away from him at this point, then made another offer with unusual terms. He would give Aaron $100K for no claim in the company, but in exchange for 50 cents on each unit sold, until the $100K was repaid, and then a further 10 cents per unit in perpetuity.

The negotiations began to speed up now as all the sharks tried to get in on what they clearly saw as a good product with a bright future. Daymond increased his offer to £150K for a 25% stake in the business.

Aaron, looking very happy by now, barely had time to consider this before Lori moved in again with an improved offer, $100K for only 25% of the business this time, stressing to Aaron her vast experience in the cleaning products market, and her extensive retail contacts.

Kevin wasn’t going to let that ride, asking Aaron why he would want to give away any part of his company when he didn’t need to. Lori once again stressed her superior contacts within retail and how she could give Scrub Daddy the best coverage and retail opportunities.

Things became slightly heated at this point, with Lori, Kevin and Daymond all speaking and trying to convince Aaron of the relative benefits of working with them.

Robert, no longer directly involved in the negotiations, tried to help a flustered looking Aaron out at this point by attempting to recap all the offers available to him.

Lori improved her offer yet again before he could even finish, now offering $150K for a 25% stake, also promising Aaron ‘I’ll make you a millionaire, within a year.’

A shell-shocked Aaron had barely even considered that before Daymond jumped in yet again, offering $175K for 25%. Within a second Lori upped the stakes even further, ‘Mine just went to two’ she said to general amazement, now offering $200K for a 25% stake.

Daymond dropped out at this point, cheekily suggesting he had cost Lori an extra $100K with his additional offers, she didn’t seem particularly upset.

The incredible string of options offered to Aaron weren’t completed yet, Kevin then offered to let Aaron repay a $100K loan at a reduced rate of 25 cents per unit, and after some bargaining from Aaron, agreed to only 7.5 cents per unit in perpetuity after the loan was repaid.

Under great pressure from all the remaining involved sharks, and clearly overwhelmed by the wealth of different offers available to him, Aaron asked Lori if she would consider dropping her share of the equity to only 20%. After a second long pause, Lori agreed and a delighted Aaron instantly confirmed they had a deal.

There have been few other episodes of shark tank where the predatory tactics of the sharks competing for a deal have been so clearly displayed, and the fantastic result achieved by the immensely likeable Aaron after such a remarkable string of offers would bring a smile to the hardest of hearts.

Its no real surprise that a product that got the sharks into such a frenzy of excitement has not only done well, but has become the most successful product in the shows history. With over $50 million in sales and over 10 million units sold.

Following his appearance on Shark tank, Aaron was approached by Bed Bath & Beyond and ShopRite and he quickly secured deals with both companies. With the assistance of Lori Greiner, it wasn’t long before deals had also been secured with some giants of retail, Staples and Target, with an additional deal with Ace Hardware following shortly afterwards.

Manufacturing is now done in-house, with Scrub Daddy employing 50 people in its factory in Folcroft, Pennsylvania. Aaron has made good on his claim to develop additional products. Along with Lori’s help, the Scrub Mommy and Sponge Daddy are now also available alongside the original Scrub Daddy.

Aaron and Lori continue to work closely together and have forged a strong business relationship that has taken the company to deservedly great heights. The incredible success enjoyed by both of them hasn’t stopped the irrepressible Aaron aiming even higher, he wants to make Scrub Daddy a Worldwide household name, alongside such cleaning giants as Brillo and Lysol. For Aaron, and for Scrub Daddy, the future is as gleaming bright as the dishes that it cleans.