Episode is a game that belongs to a tried and true genre, but it executes this genre in a new and interesting way. In Episode, users play through different “episodes” of stories. The game offers a wide variety of different stories to choose from — sci-fi, fantasy, realistic fiction, the list goes on. The episodes are presented kind of like episodes of a television show, with relatively impressive visuals and animations that are punctuated by choices popping up on screen. So, imagine you’re watching an argument taking place outside of a bar. A menu pops up. Do you intervene, or do you walk away? It may not sound like much, but this game is addictive, and a lot of people really like it.

There are a couple of flaws with the game, however. I personally really dislike the freemium model that Episode presents. Basically, you have to use a pass to play an episode. Passes take a long time to regenerate, but they can be purchased instantly. This system makes it really difficult to play a lot at once, and it feels kind of greedy. Still, you can’t deny that Episode’s writing is pretty fun. In this article, I’m going to talk about some great alternatives to Episode, that have the same kind of writing and player-involvement while being a little more accessible. Without further ado, here is my list of the top five best games like Episode. 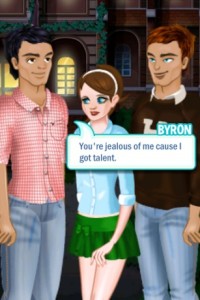 Campus Crush is pretty much an Episode clone, if we’re being honest. In this game, you go through a college-themed story, making your own decisions and affecting the overall story. It’s worth noting that you’re ONLY able to complete this college-themed story. There isn’t as much of a selection as you would find in Episode. You customize your avatar, you flirt with other characters, and so on. Out of every game on this list, Campus Crush is probably the closest to Episode. However, I don’t think that that inherently means that it’s the best Episode alternative. Because while this game has Episode’s strengths, it also has all of its weaknesses, too.

To begin with, this game has the same microtransaction payment model. Like I said before, I personally find this kind of scummy, but I’m not going to entirely push my beliefs on you. Maybe you’re fine with the pass system in Episode. If that’s the case, then Campus Crush is perfect for you. It doesn’t really improve upon Episode that much, being nearly identical. However, the story that you go through is still unique, and the central game mechanics are still functional and fun. If you’re looking for a sidegrade to the original game, this is exactly what you’re looking for. Although Campus Crush may technically be the most like Episode out of every other game I’m going to talk about, I don’t think it’s the best. There are other, better choose-your-own-adventure games that you can choose from.

So far, we’ve talked about games that are pretty light in subject matter. Campus Crush and Episode both usually involve pretty easy-to-understand, straight-forward stories. Your boyfriend cheats on you with your best friend. You get a bad grade on an exam because you were up all night partying. A Dark Room kind of takes a step away from that general tone, as a game that is much more strange, and much more mysterious. Even though this may game may technically be better than other games on this list, I think that this mysteriousness may be off-putting to some people. It’s definitely kind of weird.

In this game, you wake up in a dark room. You light a fire to warm yourself. From there begins a Cookie Clicker-like grind, where you gather sticks and hunt animals, eventually building out an entire settlement. All the while, an odd, compelling story begins to unfold. It’s a very interesting game, and it’s all presented in a very minimalist, text-based way. Like I said, I can understand why this might not be for everybody. It’s also very different from Episode. However, I think that if you enjoy the text-based, story-based structure of Episode, you might enjoy this kind of game, too. It’s an interesting marriage between games like Episode and Cookie Clicker, all wrapped up in a mature, more dark package. This pick is kind of out-there, I admit it, but I think that you should definitely give this game a try before you pass any judgment on it. I was unimpressed when I first booted it up, but I found myself hooked within a few minutes. It’s worth a look on your part, at the very least. 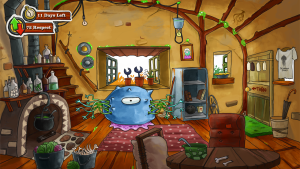 If A Dark Room is on one end of the spectrum, then Monster Loves You is on the other end of the spectrum. Monster Loves You is a cute little game, where you go through a monster’s life from birth to death. It’s played out in a sweet way, but some of the choices that you have to make are kind of morally challenging. You live in a world where monsters and humans are at odds, and so you often have to make decisions that come down to doing what you think is right versus what your species thinks is right. Like A Dark Room, this isn’t entirely similar to Episode, but I think you’re dealing with the same kinds of conflicts and the same kind of story. It’s just presented in a different way.

Monster Loves You also has a bit of a broader appeal than Episode. Episode is kind of presented as a game for everyone, but you would be surprised how age-inappropriate some of the levels are. You have to make choices regarding drug, sex, and alcohol. This is fine, if you’re older and comfortable with that kind of content. If you’re not, then I think you’ll be happy to find out that Monster Loves You is a game that is as good for teenagers as it is for children. Like I’ve said, everything is presented in a very approachable, cute way. Still, I had to place this game a little lower, if only because it may be a little too young, if you know what I mean. If you are fine with the kind of content that you find in Episode, you may be unimpressed with how “childish” this game appears. I still think you should give it a try, but I’m fine with ranking it this low because of that factor. The next couple of games on this list are still accessible, but they’re still primarily geared towards people over the age of 13. 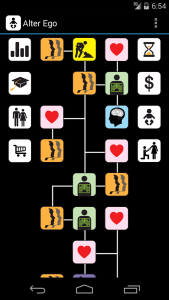 Alter Ego was doing choose-your-own-adventure before it was cool. The game was initially released in 1986 (!!!) and it was revolutionary at the time. It gave you the opportunity to live through an entire life. You go through different scenarios (which are categorized by type — family, health, work, etc) and your choices impact your overall character’s life. I like Alter Ego because it causes you to face the repercussions for your actions. It’s easy to be an easy-going character, but it isn’t so easy when you realize that, by letting other people in the story walk all over your, you’re negatively impacting your own mental health. It’s a really sophisticated game, and it’s beyond impressive that the developers were able to accomplish this level of depth in a game that is older than most gamers.

This game is very near and dear to me personally, as one of the first life-sim games that I think I’ve ever played. I really adore it, but I couldn’t bring myself to give it the number one spot on this list. Why? You have to consider that this game is 30 years old. It has since been ported to web browsers and to mobile devices, but the content of the game has remained mostly the same through that. A lot of the humor and some of the scenarios have become kind of dated since then. Although most of the experiences that your character goes through are kind of relatable, they’re not perfect. Compare this to Episode, which is full of modern slang and experiences. I think that relatability is key in choose-your-own adventure games that involve living out a regular life, with no gimmicks. It’s a little different if you’re running around in New Orleans during the 1800s or fighting aliens in space, but in this kind of true to life setting, it’s important to be able to relate to your character. I don’t think Alter Ego is really able to do that anymore. Still, it’s an amazing, thought-provoking game that I highly recommend to any fan of the genre. 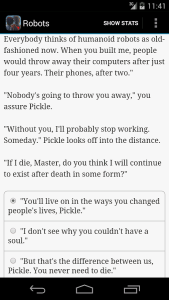 I’m going to be honest, I really struggled with which game to place in this spot. I knew from the get-go that I was giving the top spot to a Choice of Games game, but I had trouble deciding which one. Ultimately, I decided to go with Choice of Robots. This game is probably one of the most comprehensive games that Choice of Games has ever created. Like a lot of the other games on this, this game is entirely text-based. You read through different scenarios, and you make decisions. These decisions impact the outcome of what happens next in the story. The biggest pitfall that choose-your-own-adventure games tend to fall into are the illusion of choice. No matter what you do, the same thing generally happens. That doesn’t happen at all in Choice of Robots, where there are three entirely different paths that you could fall down, with every single decision you make (even the most insignificant ones) pushing you closer to a certain path.

In this game, you play as an engineering student, who is finishing up a prototype for a robot. You get to choose what the robot looks like, how it acts, and what it will be used for. Want to make a military robot? You can do that. Want to make a sexbot? You can do that, too. Opportunities aren’t really endless, but it’s pretty close. The game itself is kind of short, but replayability is absolutely insane. I’ve done several playthroughs in this game, and they were completely different each time. If you don’t like this kind of story, Choice of Games has tons of other great games, taking place in multiple different universes and instances. I recommend the Heroes Rise series, Choice of the Dragon, and A Wise Use of Time, as well. You can’t really go wrong with the majority of them, but those three are the best for people who are new to the format.

And that’s that. In my opinion, most of the games on this list provide an overall experience that surpasses (or is at least on-par with) the user experience that you have in Episode. Did I forget to mention one of your favorites? Feel free to talk about your favorite choose-your-own-adventure games in the comment section below.