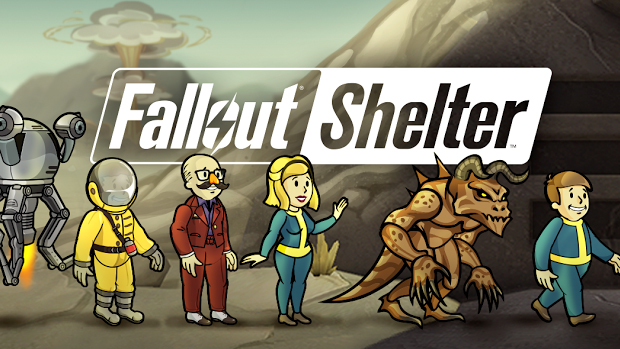 Fallout Shelter is just one of those games that demand little attention from the player. A few taps here and there for a couple of minutes is enough until you check out the status of your Vault hours later. The uninitiated may find it too simple and boring but make no mistake; the game is quite fun and charming.

If you find yourself longing for another game that simulates survival and / or an efficient community then check out these five games that we have listed for you: 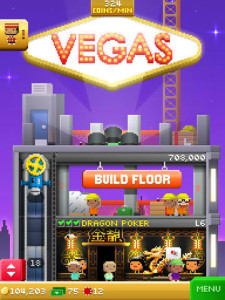 Fans of Sim Tower may find themselves at home with NimbleBit’s Tiny Tower. The tower-building sim game was originally released as Tiny Tower back in 2011 for the iOS and Android but the version for the latter was removed in 2015. It is still playable in iOS while Android users only have Tiny Tower Vegas.

Tiny Tower focuses on building, you guessed it, a tower. Contrary to Fallout Shelter’s downward progression, this game builds up until you reach the blue (and non-toxic) skies. Floors are constructed to be either commercial or residential. The game’s inhabitants called bitizens appear on the lobby with a number that corresponds to the floor they want to go. Bitizens live on the residential floors and can be employed on the commercial floors which then produce items that are sold for coins. They individually have an expertise on a certain type of business so it is imperative to assign a bitizen to a commercial floor that fits their skill.  Special bitizens sometimes pop up to provide bonuses to the floor they are assigned to. Tower Bux is the premium currency that can be purchased with real money or earned as a bonus in the game. It is used to speed up a lot of things in the game that involve waiting.

Tiny Tower Vegas has the same core concepts as the original game with a few changes. Commercial floors are changed into hotel rooms where guests check in for a limited time. Coins are earned after they check out. There are no longer permanent residents in the tower; instead bitizens come to the lobby as jobseekers. Since it is now “Vegas” the game has a new casino floor and the new premium currency called Chip which is earned either randomly or as a quest reward. Chips are used by players on the casino floor to play casino mini-games in which rewards are Tower Bux.

Playing Tiny Towers feels like taking a lively, pixilated vacation away from the Vault and the remains of a nuclear wasteland. 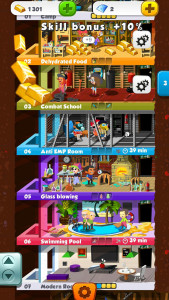 Doomsday Preppers was originally a reality show on National Geographic where “preppers” prepare for the impending end of mankind. A mobile game was spawned based on the show and one can simply imagine that this is the prequel to Fallout Shelter.

Players build an underground bunker outfitted with rooms that are crucial for survival while the atomic bombs rain from the sky. Preppers descend into the bunker via elevator and are assigned to certain rooms (again based on their expertise) where items are produced which are then sold for gold. As usual there is a premium currency for speeding up things and whatnot in the form of diamonds. Assign preppers, earn gold, build and expand the bunker, rinse repeat. You know the drill.

The game boasts 140 buildable floor levels with 315 items and more than 150 customizable avatars for the preppers. Doomsday Preppers is colorful and vibrant, so I guess the game takes place somewhere where the worst of the apocalypse has not become much of a now yet. 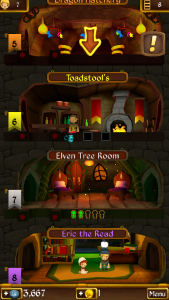 There is not much to say about this game when you are already familiar with the first two games mentioned above. Lil’ Kingdom has players build a little kingdom of their own deep in the earth, constructing floors with varying purposes while assigning people to perform specific jobs and earn currency. Gems are the premium currency in this game and it is awarded quite generously. Collectibles are rewarded in quests which are used to unlock unique floors with neat bonuses. The game has good colorful visuals with cheerful characters and some bit of humor, but there is no denying that the game just offers the same Tiny Tower experience in a fantasy setting. Maybe this is the one you are looking for when you want to see elves and dragons instead of raiders and Super Mutants. 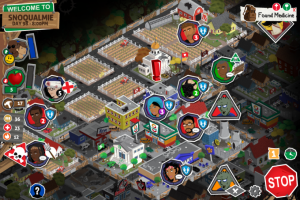 Survival games and zombies always go hand-in-hand. Toss in the flavor of turn-based strategy and city-building to that mix and you end up with Rebuild 3: Gangs of Deadsville.

In this game the player leads a small group of survivors in a zombie-infested city, not to look for an extraction zone but to establish a colony and reclaim everything from the rotting grasp of the undead. Well not just zombies but from other humans as well. Parts of the city are presented in squares wherein players have to assign characters on missions to claim them. The city grows as the game progresses and the player captures more squares. Survival is ensured by building up defenses while feeding and housing the growing population of survivors. There is nothing too complex here in terms of strategy, and in the end it’s all just a numbers game.

Random events suddenly pop up that progress the plot. Multiple endings are available based on the choices that you made. There is virtually endless replayability as cities and events are randomized with every new game. Characters can have professions with different bonuses. New abilities for the city are unlocked with the in-game research function.

If you’ve been bit by the Walking Dead and Fallout Shelter bug then this might be the game for you.

This War of Mine 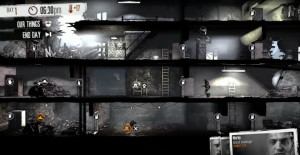 Games that focus on warfare usually focus on the battle-hardened warriors on the frontlines. This War of Mine is a different take from that familiar formula by putting the spotlight on the inexperienced civilians who are caught in the crossfire. The game was originally released on November 2014 for the non-mobile platforms while Android and iOS got it on July 2015.

The game pits survivors on a shelter in the middle of a fictional city ravaged by an ongoing war. Players have to ensure the survival of the characters by gathering and crafting items while maintaining health and hunger until the ceasefire occurs. It has two main phases namely the Day Phase and Night Phase. The Day Phase focuses on bolstering the shelter’s defenses, crafting essential materials, and tending to the wellbeing of the survivors as enemy snipers make it impossible to step outside. Night Phase allows players to explore the surrounding areas for resources with a chance to encounter other characters with unpredictable motives. Morally grey choices are presented to the player when face to face with the NPCs who are obviously helpless. Will you help an old couple with your dwindling supplies, or take what little they have by force? Acts of kindness may eventually have negative consequences in the long run, so choose carefully.

There are no colorful areas or smiling faces here. The realities of war and the horrors that come along with it are presented on a bleak atmosphere. If you fancy a game of survival that forces you to make tough choices then This War of Mine is certainly the war for your fingers.

Have you tried any of the games mentioned above? Do you have other games like Fallout Shelter that are fun to play? Let us know in the comments below.