Life is Strange delivers a refreshing take on the adventure genre by shying away from combat in favor of puzzle solving and where actions performed by the player ultimately affect the entire plot. The first season gave us five thrilling episodes and the second season has already been confirmed by developer Dontnod Entertainment

If you are thirsting for more adventure games where choices matter and where you don’t have to actively gun down bad guys then quench it with the list we have prepared for you:

The Vanishing of Ethan Carter 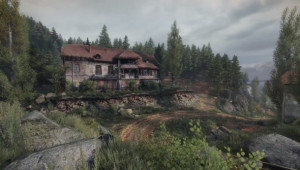 Vanishing is a first-person adventure game that focuses on puzzle solving mixed with the total freedom of exploration. It was created by a small Polish game development team named The Astronauts. You control detective Paul Prospero on his quest to learn more about a boy named Ethan Carter after the latter sent him a disturbing letter. The detective then goes to the boy’s hometown of Red Creek Valley in Wisconsin where something supernatural and violent is prevalent.

Right off the bat you can explore every area of Red Creek Valley without even one loading screen to interrupt your immersion. The setting of the game is undeniably gorgeous with many scenes worthy of a screenshot thanks to the photogrammetry technique utilized by the developers. There is absolutely no combat element in this game; instead you’ll have to look around every nook and cranny for details regarding the main plot. Paul Prospero’s supernatural ability to observe important events as played out by ghosts is crucial in helping you solve puzzles. There is no in-game journal that records the things that you have done so you might need to rely on your handy-dandy notebook and pen to jot down details that may come useful in the future.

The game is pretty short and can be completed in just one sitting especially for those who are well-versed in puzzle games. Nevertheless Vanishing provides a unique and visually stunning experience with a powerful story and interesting characters. 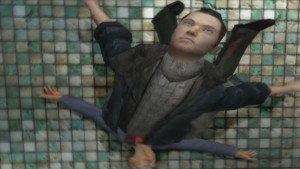 A paranormal thriller set in New York City where people obliviously murder strangers in ritualistic fashion.You’ll have a taste of its disturbing plot right away at the introductory scene with the main character Lucas Kane about to do the grisly deed inside a diner’s bathroom.

Choices are a crucial element in this game. In the opening murder scene you will have to choose on how to get away with it considering there is a cop dining outside. Will you attempt to dash out of the establishment or will you clean up your mess and try to act cool? Solving the problem or seeing a game over screen depends on what you decide to do, although there are certain choices that are only aesthetic in nature and will still result in the same outcome without affecting the story’s flow.

The game is set on a third-person perspective with simple controls. Some events require button mashing or playing a rhythm mini-game. The sanity meter at the bottom acts as a health bar of sorts. Certain events either add or deduct to a character’s mental state. Let it drop to zero and the game is done.

The graphics might be outdated if you do not choose to play the Remastered version released last year. Regardless, Indigo Prophecy delivers a good story in a dreary atmosphere with likeable characters and superb voice acting. Check it out and unravel the mystery behind the murderous urges that grip your ordinary fellowmen.

Tales from the Borderlands 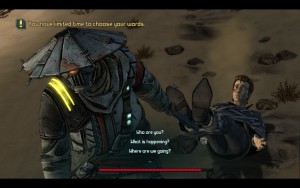 Tales shares the same universe with the first-person shooter game Borderlands but you don’t have to be a fan of the latter to enjoy this comedic treat from Telltale Games.

The game takes place after Borderlands 2 and has two main characters namely Fiona and Rhys. The two unwilling partners embark on a humorous journey throughout the world of Pandora and its interesting inhabitants. The perspective jumps between the pair which offers different points of view on what is currently happening. Of course the choices based on your decisions and morality decide what Fiona and Rhys will do to solve a problem and what kind of people will they turn out to be. Be warned as there are tough choices to be made here.

Puzzles are a rarity as Tales relies mostly on character development and branching dialogue while some scenes require fast reflexes. Money also exists in this game which you can use to purchase stuff.

If you feel like taking a break from the seriousness of the other adventure games then give Tales a shot.

The Walking Dead: The Game 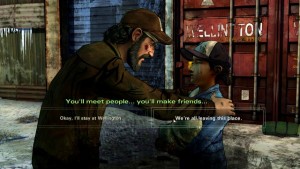 Another adventure game from Telltale Games that is based on the hugely successful comic book and television zombie apocalypse series. The Walking Dead: The Game currently has two seasons with five episodes each and the save games carry over from the first season to the next.

The first season deals with convict Lee Everett as he is caught in the middle of the zombie apocalypse while on the way to jail for murder. Now he and a young girl named Clementine has to learn how to survive in this new unforgiving world where danger lurks in the form of man and undead. Character development through dialogue and choices is given more focus than puzzle solving. Timed responses are of course present with failure corresponding to outcomes that can affect the future of the story. The other characters you will meet have their own dispositions towards you depending on how you treat them or how you approach certain matters.

The second season continues the story while the third season is currently on the works. Fans of the zombie franchise will surely enjoy the additional immersion in a world crawling with reanimated rotten flesh. But if you are not that familiar with the series then don’t let it stop you from trying this game. 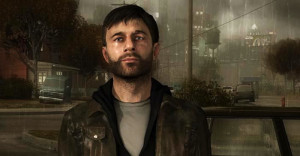 Quantic Dream, the developers behind Indigo Prophecy / Fahrenheit, has released another thriller titled Heavy Rain. The game deals with the mysterious Origami Killer and the four playable protagonists who are involved.

Heavy Rain starts off quite slowly and picks up the pace as it goes on.  This might turn off players who do not have the patience for such pacing. But if you persevered through it then buckle up for one heck of a thrilling ride.

One mechanic that makes this game unique is that there is no game over whenever you fail something or when a character dies. The story goes on even if one of the protagonists kicks the bucket. Letting the bad guy get away after a dozen failed attempts to contain him will still propel the story forward instead of restarting to the previous checkpoint. Action sequences pop right out of the blue hence your attention must be glued to the screen in order to respond to these quick time events.

Heavy Rain is a PlayStation exclusive so PC and Xbox folks have to get the appropriate console to play this gem of a game. There are interactive YouTube videos of the game that allow viewers to make decisions while watching but it does not completely replicate the real thing.

The animation is impressive and the same goes for the voice acting. There are twists to the story that will surely keep you glued to your seat. It doesn’t take that long to beat the game but you can always keep coming back to try new things and see how will they play out.

Have you tried any of these games like Life is Strange? Or do you know other games that were not mentioned above? Let us know in the comments.