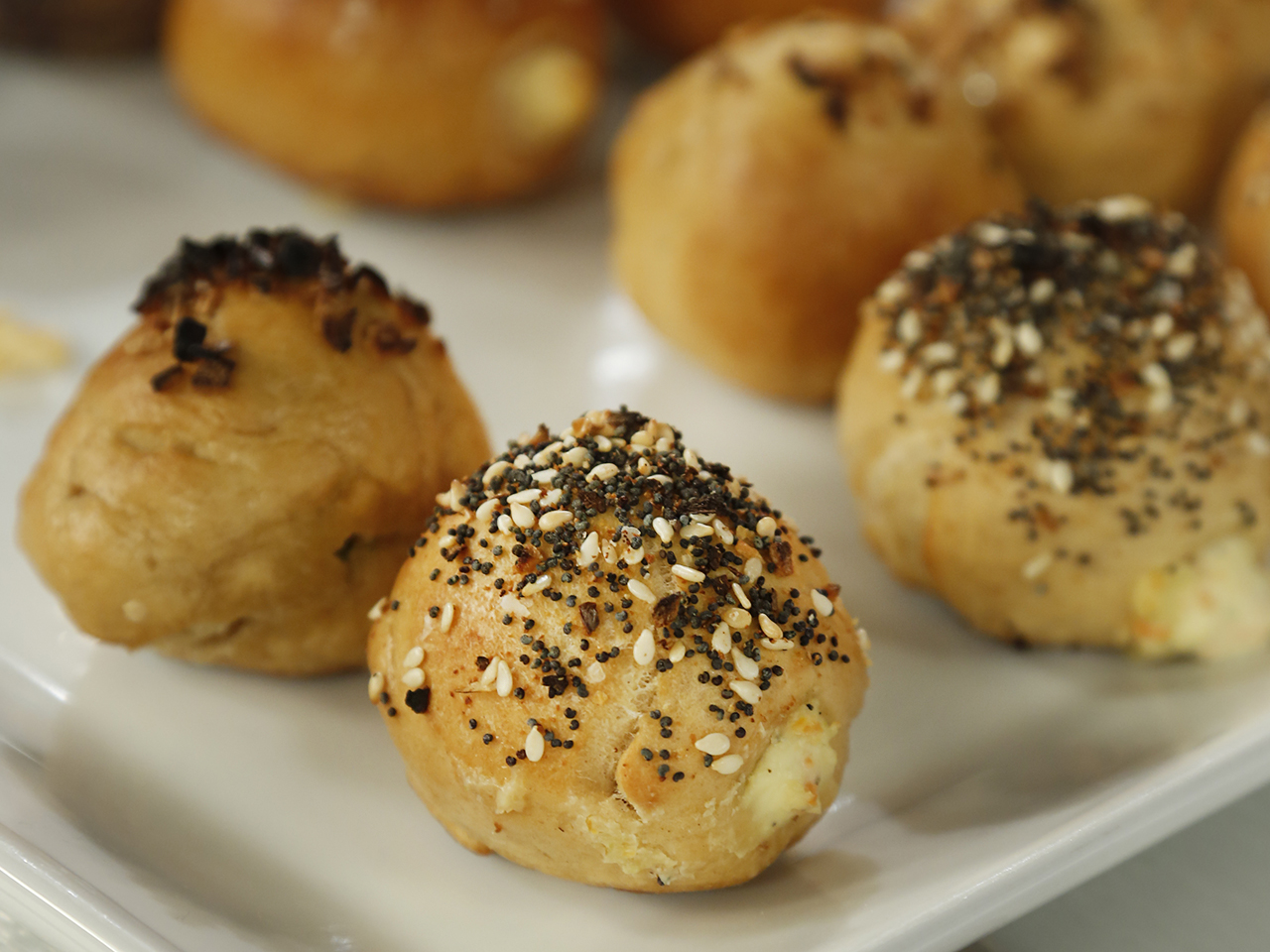 Like many great ideas, this one was born in a dream. No, Nick Oleksak hadn’t envisioned an eagle eating a snake, while perched atop a cactus, marking the building site of Tenochtitlan! Good guess. When Nick dreams, he dreams of bagels. This may be surprising, given his career as a credit broker at GFI Group on Wall Street, but there is something within him, a mysterious impulse, that guides him to baking. After Nick and his wife Elyse had lived in New York for ten years, they knew a good bagel when they tasted it. It would follow that Nick would never dream of something as ordinary as a regular bagel. No, his nocturnally hallucinated baked goods were filled with cream cheese.

Of course, this was the game changer. The cream cheese filling was the founding force behind Bantam Bagels, a company that Nick founded with his wife. Placing her complete trust in the spiritual insight of her aspiring bagel baker-husband, Elyse immediately quit her job on Wall Street. The pair relocated to a store front where they sold each bagel for a buck-fifty. Now, with a baby on the way and an insatiable thirst for a bagel empire, the couple have decided to consult the sharks. Unfortunately, Nick has stopped having visions to guide their business. While Nick and Elyse are set on turning Bantam Bagels into a national brand, they need the sharks for their advice and their checkbooks.

Upon entering the tank, Nick and Elyse offer the sharks eleven percent equity in their business, in exchange for two hundred seventy-five thousand dollars, a nice round number. The pair explain that they’re practically New York locals now, ten years post-graduation from Columbia University. The city’s greatest issue? Not pollution, not crime or graft. The bagels were too demanding. They were huge, doughy, and calorie dense, demanding any person’s full mental acuity in deciding whether or not to indulge. Nick and Elyse’s solution was the award-winning Bantam Bagel ball with cream cheese filling. It didn’t just solve the existential crises of indecisive lovers of baked goods. It tasted good, too. With high quality ingredients and authentic recipes, Bantam Bagels was more than just the next fad.

As Elyse passed out the mini bagel balls, Nick took great delight in describing how they should be eaten. “Find the hole. Bite the hole.” Nick’s demands were to be met, or else. His baking voodoo could be felt by each shark, and none could resist consuming more and more, at an alarming rate. Pausing only momentarily, Kevin asked to talk numbers. Since the founding of the retail location on Bleecker Street, the store on its own had seen about two hundred thousand in sales. Each Bantam Bagel could be baked for thirty cents, and they sold for dollar and fifty cents. Kevin marveled at the delicious margins of the novelty food industry. People’s willingness to shell out so much cash for Bantam’s products raised suspicions that the bagels could be filled with some sort of addictive chemicals.

If Nick and Elyse Oleksak could secure the two hundred seventy-five thousand, it would go toward building a commercial kitchen. Furthermore, they could begin buying ingredients in bulk. This would suggest great expansion plans, so Kevin wondered where these led. More stores? On that note, Nick and Elyse may have more in common with the ancient Aztecs than we initially thought. Their business plan has essentially been to wander aimlessly in the desert.

Elyse dressed up what amounted to “a little of this, a little of that” in the best way she could. Their first two experiments consisted in retail and wholesale, both boasting high revenues but abysmal margins. Although Bantam Bagels sold out when it appeared on QVC, at just two dollars in profit per twenty dollar package, there wasn’t enough for the bottom line. When asked why Bantam was still doing business with QVC after those kinds of margins, he answered with marketing. “There’s no better way to get in front of eight million people.”

Kevin did his best to set the pair on the right track. Two hundred seventy-five thousand dollars wouldn’t give them the luxury of more experiments in distribution. With that investment amount, they could enter one commercial kitchen, set up a website, and bake bagels for direct-to-consumer sales online. They no longer had the time nor the resources to explore uncertain possibilities. “Everything else is irrelevant,” Kevin claimed.

Mark wanted to know how deep they were. Nick and Elyse had invested fifty thousand dollars of their own cash into the business, but they also had investments from Wall Street. Both had career histories in the financial sector (Nick at GFI and Elyse at Morgan Stanley), so they were able to secure loans. All told, they received about six hundred thousand dollars in exchange for twenty-three percent of the company. Upon securing a further investment, Nick planned to quit his job at GFI to focus completely on Bantam Bagels. Robert wondered if this business was the right fit for Nick. If he was already making a six figure salary, why would he risk it all for something so unfamiliar? Nick responded that he was ready to leave the rat race and get started on his dream.

Robert wasn’t through. He claimed that Nick’s Wall Street experience had taken the life from him that is necessary to be a successful entrepreneur. He needed a voracious drive that wouldn’t be present until he left his job and had to start scraping together rent money. “There’s a lack of desperation that you get when you’re making six figures.” Was Nick’s lackadaisical stroll through the world of running a bakery a serious attempt at building a career, or was it just a hobby? Mark disagreed with Robert’s analysis. If poverty is the soul of entrepreneurship, how good could any of the sharks be? Robert clarified that poverty may not be necessary, but the Oleksaks clearly needed something or someone to provide direction.

When Elyse stepped up and claimed that they were “coachable,” however, Mark turned on them. He didn’t want to be a coach in an industry he didn’t understand. Any investor signing on with Bantam Bagels would be taking a huge risk as a pioneer, and Mark wasn’t confident that the Oleksaks had the business savvy to stay on track. He backed out. Despite Robert’s disagreement with Mark over the theoretical effects of wealth accumulation, he agreed when it came to Bantam. It would take them a lot of trial and error to refine their strategy, a process that Robert had no interest being party to. Robert stepped down, as well.

Barbara came bearing an olive branch, ready to make an offer. She called herself the perfect partner because of her experience working with Daisy Cakes. After going “to hell and back,” she knew the baked goods industry inside and out. However, she had several conditions for the offer. She disliked the branding, since it didn’t describe the one element that makes Bantam Bagels unique. Secondly, they would have to drop QVC. With margins of only a couple dollars, energy was much better spent elsewhere. With these conditions, Barbara was willing to offer two hundred seventy-five thousand for fifty-one percent. Any long-time fan of Shark Tank should be experiencing flashbacks to season one. Naïve entrepreneurs would enter the tank intending to give up a small amount of equity and would leave after having given up controlling interest. Kevin had a similar deal. Nick would have to quit his job, they would have to rent (not own) a commercial kitchen as soon as possible, and they would have to sell exclusively direct-to-consumers. If they could meet these conditions, Kevin would take only fifty percent equity.

Barbara and Kevin were content to squeeze Bantam Bagels for all it was worth. After all, they were the only game in town. That was, until Lori made an offer of her own. Her sole condition was that they change the name to something more immediately recognizable. She offered them her investment for thirty percent, a far cheaper deal than Kevin or Barbara had offered.

While Kevin stayed silent for the remainder of the segment, Barbara seemed willing to negotiate. Of course, she didn’t want to lose any deal, but she has gone on record saying “I hate losing to Lori!” so it could be personal. The Oleksaks countered Barbara at twenty-five percent, and Lori began to protest that they were wasting time not taking her deal, when they could be selling bagels on TV. Was Lori ready to commit to twenty-five percent? On the single condition of an immediate answer, Lori said she would accept the offer. Bantam Bagels and Lori had a deal.

All three began to gush about how excited they were. Lori was full of ideas, wanting to approach a food truck model. Clearly, her insight and inventiveness would be a welcome force. With someone else doing the experimentation, Nick and Elyse could focus more on the products themselves. Nick admitted they were ready to give up a certain equity for a certain shark, and Lori had met both of their qualifications. From here, it would be hard to guess where Bantam Bagels would end up next, but maybe that’s the whole point. After all, why partner with a team guided by visions if you don’t, deep down, almost admire that crazy unpredictability?

It’s tough to say if it’s the ingenuity of Lori or the all-in attitude of Nick and Elyse, but business has been booming for Bantam Bagels since the original segment. In eight months, they have done over two million dollars in sales, over ten times their sales figures before they appeared on Shark Tank. A viewer might be surprised that their store front still bears the Bantam Bagels moniker. After all, wasn’t Lori’s deal contingent on a name change? It seems like the addition of a tag line was enough for bagels on their way to store shelves. The product is now known as “Bantam Bagels Bagel Stuffins.” This preserves the original branding that had begun to grow popular in New York City, and it clarifies the product for consumers.

Starbucks is the next big news for Bantam Bagels. With Lori’s help, they closed a deal to put Bantam Bagels in thirty-two New York test locations. After a wild success, Starbucks expanded the line to nearly four hundred more of its stores. With continued expansion, Bantam Bagels has the potential to be in seven thousand Starbucks locations across the United States. The good news doesn’t stop here. It may not be food trucks, but Bantam did manage to break into another unorthodox food and hospitality space. Bantam Bagels will be coming soon to all first class Delta airlines flights leaving New York. In less than a year, Nick and Elyse’s business has exploded, and it looks like more is to come. Who knows? Another dream could appear to Nick any day that tells him to develop a line of specialty, cream-filled doughnut holes. With magic, and bagels, anything is possible.