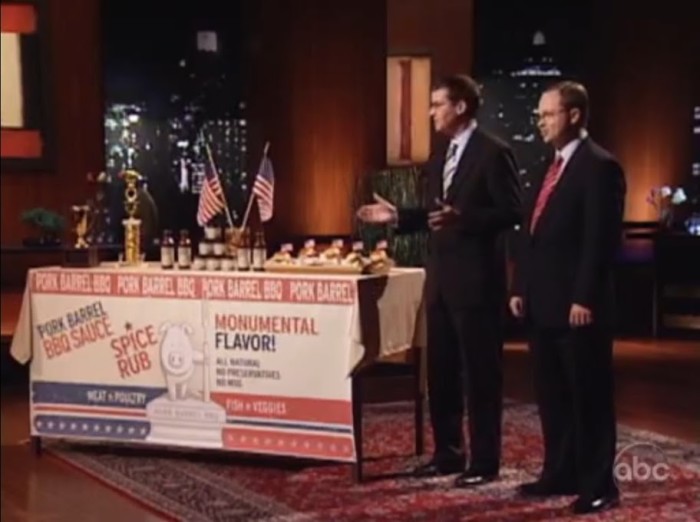 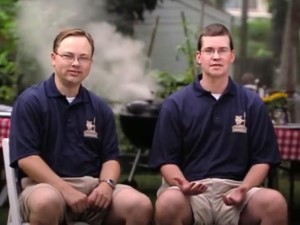 Heath Hall, who works for a think tank on Capitol Hill and Brett Thomson, who is a lobbyist on K Street, both decided to put their money to good use and create a company called Pork Barrel BBQ. Pork Barrel BBQ is an All-American barbecue sauce and spice rub company, and both Heath Hall and Brett Thomson are hoping to bring their monumental flavor to the entire nation. Both Heath and Brett state that they are conservatives and dislike the way that Washington is bailing everything out. They state that they wanted to prove that, if you have a good idea, you could still use the American Dream to build something great.

Heath Hall states that their All-American spice rub is great on meat, and even on vegetables, which he thinks that their liberal friends will appreciate. Brett Thomson says that they are hoping the Sharks will enjoy their sauces and spice rubs, and will appreciate the fact that they could make millions of dollars, if they would invest in Pork Barrel BBQ.

Brett Thomson starts by introducing himself, and stating that he is the CEO of Pork Barrel BBQ, after which Heath Hall introduces himself, and states that he is president of Pork Barrel BBQ. Heath Hall continues by stating that they are a Washington D.C. Gourmet Dry Run and BBQ Sauce company, and that they are seeking an investment of fifty thousand dollars, for a ten percent stake in their company. Heath Hall continues by making a joke, saying that it is a small price to pay, to be partners with an American company, that isn’t owned or operated by the federal government.

Brett Thomson continues the presentation by stating that Heath and he love two things, which are making great barbecue and making lots of money. He continues by saying that, in six short months, they were able to successfully develop, brand and market their All-American spice rub and pork barrel barbecue sauce, which has recently been voted the best barbecue sauce in the whole nation.

Heath Hall states that their Pork Barrel BBQ All-American spice rub contains natural herbs and spices, which goes great with pork, chicken and beef. Heath Hall continues by making another joke, saying that both he and Brett thinks that their spice rub would also go great on sharks, after which he points towards the Sharks themselves.

Brett Thomson states that their friends thought that they are crazy for starting a company at the peak of an economic crisis, but states that they saw it as a chance to grab a piece of the American Dream. Heath Hall continues the presentation by stating that both he and Brett Thomson are from Missouri, which is the Show Me State, and they want to show the Sharks, how great their products taste.

“Brett Thomson walks towards the Sharks with a tray of their products, so that the Sharks can taste them and see if they like it”

Heath Hall states that they have been told by competitive barbecue teams, veteran chefs and other consumers, that their spice rubs and barbecue sauces are the best they ever tasted, and they will definitely continue using it.

“Kevin Harrington asks Heath Hall who came up with the recipe”

Kevin O’Leary states that the Pork Barrel BBQ products taste great, but that the company name is pretty unknown, to which Heath Hall states that they have entered a competition, competing against fifty other teams, and that they came in second for the best barbecue sauces in the whole nation.

Brett Thomson answers the question by saying that they have just scored a huge deal to have their products distributed in major grocery store chains, and they also have ten thousand units in production at the moment, which are heading out to the stores in the following month.

Brett Thomson answers the question by saying that it costs them two dollars to produce the spice rub and one dollar and eighty cents to produce the barbecue sauce, and they have a fifty percent profit build into that. He continues by stating that, over a full year, they are anticipating on very conservative estimates that they will have over four million dollars in revenue, of which over a million dollars is profit. 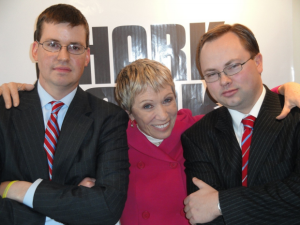 Brett Thomson answers the question by saying that they have chosen the best distributor on the east coast, from New York to Florida, who has twenty two years of experience. The distributor has used his revenue projections and his experience to come up with real and conservative based numbers.

Robert Herjavec states that the challenge with this is purely one of distribution, and it is all about marketing. He states that Pork Barrel BBQ is very small in size and for that reason, he will not be investing in their company. Robert Herjavec says that he is out. Kevin Harrington states that Robert Herjavec really hit the nail on the head, and that the key is distribution. He says that Heath and Brett are projecting four million dollars in sales, but what if they cannot sell their ten thousand units. If they are able to sell their products, their sales will continue to sky rocket, but if they can’t, they might be out of business. Kevin Harrington states that he does not want to take the risk, and says that he is out as well.

Daymond John states that everyone probably thinks that they can make a barbecue sauce, but they can’t, and that the market for barbecue sauces is a crowded space, which is also the reason that he does not want to invest in Pork Barrel BBQ. Daymond John says that he is out. Kevin O’Leary states that he sees two problems, one of which is the overvaluation of the company itself. The second problem is that both Heath and Brett are only part-timers, which makes it feel like they are only hobbyists. Kevin O’Leary states that he would have been willing to invest, if both of them were working full time on Pork Barrel BBQ rubs and sauces, but they aren’t, and for that reason, Kevin O’Leary is out as well.

Barbara Corcoran says that she is looking at Heath Hall, and that she cannot look at him, without picturing that he is standing there in a pig costume. She states that he is a very handsome man, and that she is not saying that he looks like a pig at all. Barbara Corcoran states that she is interested in Pork Barrel BBQ, but does not see how fifty thousand dollars could help the company. Brett Thomson states that they have a hundred thousand dollars of their own money, which they are willing to invest in their own company, and tells the Sharks that they are very committed to Pork Barrel BBQ, and do not see it as a hobby.

Brett Thomson and Heath Hall started their own barbecue sauce and spice rub company, which they are very enthusiastic about. Even though they already found a distributor, they still needed an investment from the Sharks, to be able to expand and bring their products to more homes in America, and all around the world. Pork Barrel BBQ has about ten thousand units in production, and it all depends on the sales, if they would make it as a company. There is no mention of Pork Barrel BBQ being the best or worst on Shark Tank. Only Barbara Corcoran was willing to invest in the company. The other Sharks were not willing to invest in Pork Barrel BBQ due to the fact that it is a small time sauce company, and they are pretty much unknown, which means that it is a huge risk to invest in it. 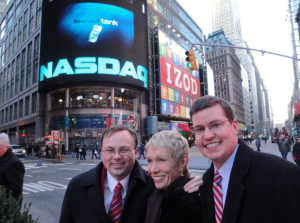 After Brett Thomson and Heath Hall left the Shark Tank, there sales have expanded drastically. They started making a name for themselves, which lead to other major retailers taking an interest in Pork Barrel BBQ products. At this moment, you can purchase any of the Pork Barrel BBQ products by going to www.porkbarrelbbq.com, or by going to one of the many retailers, such as Costco, Whole Foods and Waldbaums. There are a lot of very positive reviews about Pork Barrel BBQ products, especially on Amazon. A lot of the consumers are very happy and write about how there is no better spice rub or barbecue sauce in the world.

It is very easy to tell that Pork Barrel BBQ has succeeded as a business, due to the fact that there is a lot of information available about the website, the company has a very professionally designed homepage and you can purchase their products in online and regular retailers. Thanks to Barbara Corcoran’s investment, Pork Barrel BBQ has managed to expand and gain a good chunk of the barbecue sauce market share. The price for Park Barrel BBQ products range from thirty dollars for six bottles of original barbecue sauce to sixty dollars for twelve jars of spice rub.