Wealthiest Athletes in 2018 – See Who Makes The Most Money 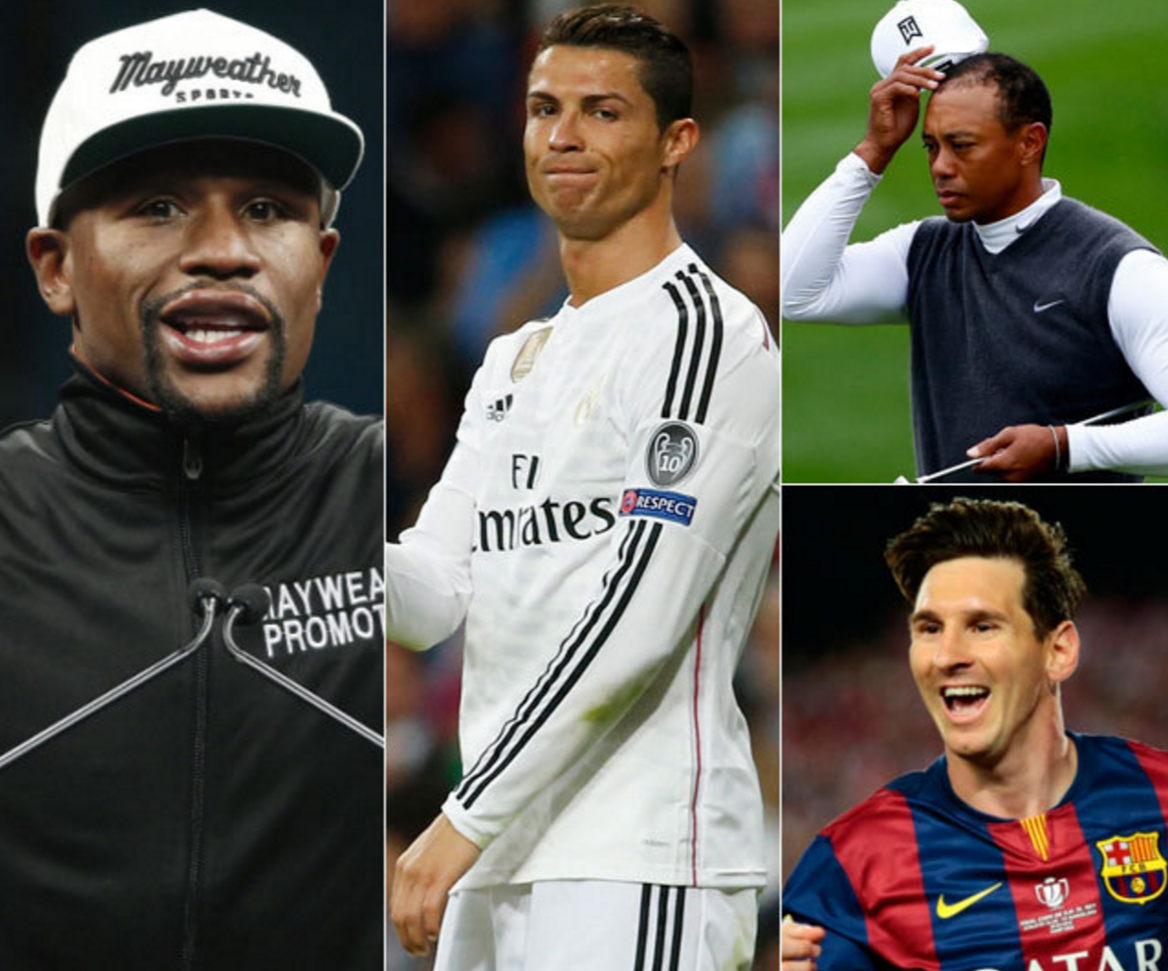 Sport has become a massive business and an even bigger earner for the athletes in their respective fields. In many cases, athletes earn more from endorsements than from the sport itself. Here is the current list for the top 10 paid athletes in the world.

Coming in at number ten is Kobe Byrant, professional basketball player for the Los Angeles Lakers of the National Basketball Association (NBA). Byrant entered 2016 with a total salary of $23.5 million. He received a further $26 million in endorsements bringing his total earnings to $49.5 million.

Kobe Byrant was born on August 23rd, 1978 and entered into his professional basketball playing career directly from High School after being recognised as the top High School Basketball player in the country. Byrant has played with the Los Angeles Lakers for twenty seasons thus breaking the record for most seasons with the same team. Byrant announced that he would retire after the 2015-2016 season.

It wasn’t all plain sailing for Byrant however as in 2003 he was accused of sexual assault in Colarado. Although the case was dropped in 2004, it was a difficult period for Byrant with the rumours damaging his reputation. Endorsement contracts he had held with McDonalds and Nutella at the time were terminated by the respective companies.

Although such allegations would have been permanently damaging for many athletes, this did not see the end of endorsements offered to Byrant and as the figures above suggest he has most certainly earned his place on the top 10 paid athletes in the world.

At number nine we have golf superstar Tiger Woods who has enjoyed one of the most successful careers of all time in the golfing world. Woods has been one of the highest paid athletes in the world for a number of years. Woods entered 2016 with a total salary of just $0.6 million but received an additional $50 million in endorsements bringing his total earnings to $50.6 million.

Born on December 30th, 1975, Woods turned professional at the age of 20 following an impressive amateur golfing career. Within his first year as a professional golfer, Woods had won the Masters in 1997, one of the four majors and probably the most respected golf tournament in the world. Woods had reached the world number one spot by June 1997, an incredibly impressive feat just a year after turning professional.

During the 2000’s Woods was a dominant force in the golfing world and he spent many periods during that time as World Number One. However, late in 2009, scandal hit Woods when he started experiencing marital difficulties. Following his separation from then wife Elin, many women came forward revealing Woods’ indiscretions. Woods’ bad luck streak was not to last and he ascended to the number one spot once again in March 2013 where he remained for over a year. Since then however, Woods has been plagued with back injuries and has undergone surgery. It is unknown if Woods will return to play again but one is for sure – he will remain a legendary name in the golfing world.

Staying with golf, at number eight is Phil Mickelson. Entering into 2016 Phil’s total salary was $2.8 million with a further $48 million earned in endorsements giving him total earnings of $50.2 million.

Born on June 16th, 1970, Mickelson has enjoyed a highly successful career in the golfing world.  Mickelson acquired the nickname ‘Lefty’ for his left-handed swing which is unusual as he is other-wise right-handed.

Mickelson has won three of the four professional major tournaments – only one of sixteen golfers to ever achieve this feat. The US Open is the only major that Mickelson has not been successful in winning, however he has come close finishing as a runner-up no more than six times!

Over the course of his golfing career to date, Mickelson has spent over 700 weeks in the top 10 of the World Golf Rankings and has reached world number two several times. With Mickelson’s golf career still going strong, his hopes of winning the US Open and adding to his already impressive earnings.

Kevin Durant is a professional basketball player for the Oklahoma City Thunder of the NBA. Durant had a salary of $19.1 million in the past year as well as endorsements of $35 million. This gives him a total earning of an impressive $54.1 million.

Twenty-seven-year-old Durant played one year of college basketball, winning numerous awards throughout that year. He was then selected by the Seattle SuperSonics however he relocated to Oklahoma City after his rookie season where he still plays today.

In 2014, Durant signed a ten-year deal with Nike. The deal is estimated to worth approximately $300 million.

Durant has been referred to as a “scoring prodigy” but is also well known for his kind and approachable demeanour off the court especially where his fans are concerned.

Durant has turned his hand to other fields too with him starring in his first movie in 2012 – Thunderstruck.

Staying with basketball, coming in at number six on the list is LeBron James. LeBron James is an American professional basketball player with the Cleveland Cavaliers of the NBA. James finished 2015 with a salary of $20.8 million as well as receiving a further $44 million in endorsements. That brought his total earnings to a very nice $64.8 million.

James who was born on December 30th 1984, started off playing high school basketball in his hometown of Akron, Ohio. James created quite the impression on the court with the national media promoting him as a “future NBA superstar”.

Similar to Durant, James had a number of high-paying endorsement deals. He too turned his hand to acting and starred in his first movie – Trainwreck – in 2015.

Ranked at number five on the list is tennis superstar Roger Federer. With a salary of $9 million as well as an additional $58 million in endorsements which totals $67 million in the last year alone, Federer is the only tennis professional tennis player to appear on the top ten list.

Federer is a professional Tennis player from Switzerland who was born on August 8th 1981. Federer turned professional in 1998 and since 2002 has always been ranked in the top ten world players. Currently, Federer is ranked at world number three by the Association of Tennis Professionals (ATP).

Federer, who is considered one of the best tennis players of all time holds many records including holding the world number one ranking for 302 weeks – 237 of those weeks were consecutive.

Federer who has a contract with Nike for the past ten years finds himself on this list with the help of endorsements from other huge brands such as Rolex, Lindt, Mercedes-Benz, Gillette and Moët & Chandon.

In the battle of world’s richest athlete, Lionel Messi finds himself ranked at number four. With an impressive salary of $51.8 million as well as endorsements to the value of $22 million, Messi entered 2016 with total earnings of a massive $73.8 million.

Lionel Messi is a professional footballer from Argentina. He plays as a forward for his club FC Barcelona as well as for his home country, Argentina. He had established himself as one of the world’s greatest players by age 20 and his talent and success has continued to grow throughout the years.  Messi is considered by most to be one of the greatest footballers of all time. That title is well deserved as Messi has set some impressive records over the past few years. He is the only player in the history of football to have won the prestigious FIFA World Player of the Year award or the FIFA Ballon d’Or a total of five times. What makes this feat even more impressive is that four of those times were consecutive.

Lionel Messi has been compared many times over the years to long-time rival Christiano Ronaldo. Whatever about on the playing field, Messi has fallen short of beating Ronaldo on this list.

Coming in at number three is Christiano Ronaldo. Ronaldo is a Portuguese, professional footballer. He plays as a forward for his club Real Madrid in Spain as well as being the current captain of his national team, Portugal. Ronaldo entered 2016 with a salary of $52.6 million. Along with endorsements of $27 million, Ronaldo had total earnings of $79.6 million.

Like Messi, Ronaldo has often been touted as the world’s best footballer with some going as far to say he is one of the best footballers of all time. By the time Ronaldo had reached just 22 years of age, he had been nominated for the FIFA World Player of the Year or the Ballon d’Or. He won that award for the first time the following year – 2008 – and had won it twice since in 2013 and 2014.

Ronaldo has turned his hand to other fields too with him opening his own fashion store, co-designing his own range of socks and underwear and he’s even planning to launch his own fragrance. With all this going for him, it comes as no great surprise that Ronaldo features so high on this list.

Manny Pacquiao is professional boxer from the Philippines. He is the only eight-division worlds champion the boxing world has ever seen and in the 2000’s, he was named as fighter of the decade. These accolades have helped push Pacquiao to number two on our list. Over the last year, Pacquiao has had a total salary of a whopping $148 million as well as a further $12 million in endorsements. That totals to a massive $160 million making it no surprise that Pacquiao features so highly on this list.

Pacquiao has been named as the best Asian fighter of all time and with good reason. Pacquiao is the longest reigning fighter to feature on the top ten list of pound-for-pound fighters.

In 2015, Pacquiao met with long-time rival, Floyd Mayweather in the ring in what was being described as the “Fight of the Century”. The fight did not live up to the public’s expectations however it was a big earner for both fighters so it comes as no big surprise that they feature in the number two and number spots of this list.

The number one spot is filled with the ever controversial Floyd Mayweather Jr. Mayweather is a now retired professional boxer from the US. Last year he fought Manny Pacquiao after long negotiations. Although deemed a disappointing fight by fans, Mayweather dominated and won. Mayweather had a total salary of $285 million along with a further $15 million in endorsements, meaning his total earnings reached an incredible $300 million.

Mayweather has had a long and successful career and is considered to be one of the greatest boxers of his time. Mayweather has never been defeated since he turned professional, a phenomenon in itself.

Mayweather has faced controversy with him serving a jail term for domestic abuse but that did not affect the revenue he has earned. Earning his spot at the top of the list, they don’t call him Floyd ‘Money’ Mayweather for nothing!