The phenomenal Counter Strike franchise entered the realm of online first-person shooters with Counter Strike: Global Offensive (CS: GO).  Without any plot or single-player campaign to explain the whats and whys, players are instead thrown in the multiplayer scene to tear each other to pieces with guns and knives.

Many other FPS games have followed suit. No backstory needed and just online carnage with new content and other twists to keep the fans engaged. If you’re on the hunt for an online FPS then check out this list we have prepared for you. 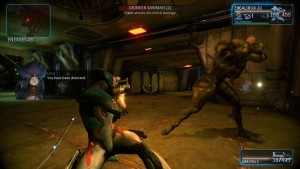 Warframe puts you in control of one of the many characters donning the titular exoskeletal suit. Each of these characters has their own unique abilities that tailor to different kinds of playstyles. Do you like playing aggressively? Supporting your team with healing? Tricking the enemy with decoys? There’s a warframe for each of them and for many other strategies. Contrary as to what it seems to appear, warframes are never limited to just one role.

The third-person shooter allows you be nimble with the use of parkour. This freedom of movement can be quite handy especially when exploring for secret rooms or scouting for a vantage point.

Missions are available for either single-player or cooperative. The latter is easier as you can take advantage of the different abilities of warframes to help in combat. Maps are generated randomly with pre-designed rooms so no two layouts are the same.  One or multiple hostile factions may also be present in a mission and may fight each other. Varying objectives range from assassinations to defending artifacts.  Player-versus-player modes support one-on-one duels and large-scale battles.

There is a large assortment of weapons and other equipment available for purchase in the market. They can be further enhanced with the use of modules. Credits are the in-game currency while Platinum is bought with real money. Blueprints are used to craft equipment as long as you meet the requirements. These plans can be bought in the market or obtained after a mission. You can of course trade items with other players.

If you like fast-paced gameplay with a host of unique characters and equipment to choose from then go ahead and wage war in Warframe. It is available on the PS4, XBox One, and on Steam. 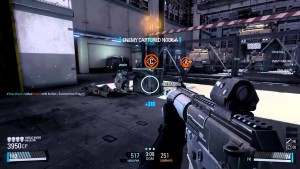 Blacklight: Retribution is your usual online first-person shooter with no single-player mode aside from practice and training. It has the familiar game modes like Deathmatch and Capture the Flag, while modes like Siege (escort a tank towards the enemy territory) and Kill Confirmed (walk over the enemy’s dead body so your kill will be counted) provide different yet fun experiences.

Weapons and body armor can be completely customized and not just for cosmetic purposes. From a rifle’s muzzle to your lower body armor, each change corresponds to both boost and decline in the equipment’s stats. For example the Slit Flash breaker muzzle reduces the weapon’s spread, recoil, and damage. However not all guns have the same amount of changeable parts.

Depots serve as an in-game store where you can purchase a variety of weaponry and items at the cost of Combat Points. These said points are earned by killing foes or accomplishing objectives. Think of it as a vending machine in the thick of battle where you can buy a health refill or a nigh-unstoppable bipedal mech.

Another unique feature to this game and its predecessor Blacklight: Tango Down is the Hyper Reality Visor (HRV). It allows you to see through walls and locate enemies and other objects for a limited time. It might sound unfair but keep in mind that you cannot attack while using it and it runs on a limited power supply.

If you fancy an FPS that does not stray too far from the basics but has some fun new twists then Blacklight: Retribution might be the one for you. You can get it on Steam and on the PS4. 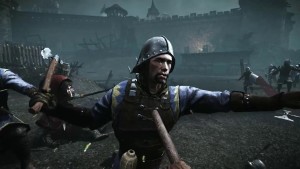 Let’s take some time away from guns and grenades and shift to swords and boiling oil in Chivalry: Medieval Warfare.

Players are grouped in either Agatha Knights or Mason Order. Four classes are available with certain differences on durability, speed, and weapon preference. You’ll get to take each of them for a spin in the tutorial mode. A starting load-out of weapons is provided and you can unlock additional equipment as you rack up your kill count.  Medieval siege weapons like catapults and ballistae also play a role in certain game modes.

The game focuses mainly on melee combat so firing from a hidden spot as an archer might not feel as satisfying as cleaving through your foes with a longsword. Combos can be chained and feints can be executed. Classes also have their own unique special attacks.

Killing blows are not as simple as watching your foe drop dead. You can actually chop off his head and witness as blood spews out like a fountain from his headless neck. If chopping is not your thing and instead you want to crush their noggins like a coconut then you can do so with a mace. Do you like bows? Worry not as your favorite weapon also has a brutal killcam.

Chivalry: Medieval Warfare is a breath of fresh air from the many online FPS games nowadays. Expect to waste countless hours howling in bloodlust as you make kebabs using your polearm. It is available on consoles and in Steam for $24.99. 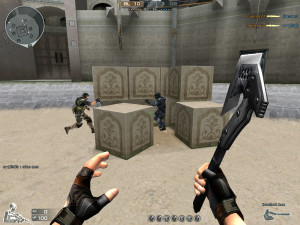 Don’t let the seemingly outdated graphics fool you. CrossFire has a huge global playerbase and is especially popular in Asian countries like China and the Philippines.

The game puts players in opposing factions namely Global Risk and Black List as they engage in different modes. Aside from the usual bomb defusal and deathmatch game modes there are some unusual ones like preventing Black List players from escaping through a portal, and a violent version of soccer.

Experience points are earned as you play games. You “level up” by getting promoted in military ranks. Higher ranks allow the access to certain weapons and servers. The armaments used in this game are based on real-life guns with realistic functionality. Skins provide additional attributes aside from making your guns look more appealing. The VIP system provides players with powerful yet expensive weapons such as a sniper rifle that refills ammo when you perform a headshot.

The low graphical quality of CrossFire actually helped in expanding its explosive number of players as it meant low system requirements. If it did not prevent other people from having a blast in shooting each other’s faces, don’t let it stop you from trying the game yourself. 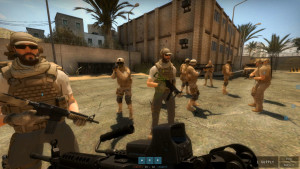 The game is touted to be extremely realistic. Your health does not regenerate and you can be quickly put to the ground with a shot or two. There are no killcams so you’ll never know who put a bullet through your head. Friendly fire is also present so you better watch out where your friends aim. Sound plays a very important factor as well. If you hear boots pounding on the next room then better start aiming your rifle towards the door. The fragility of players highly discourages those acts of rushing solo towards enemy positions and going Rambo on all of them.

Teams are divided into Insurgent Forces and Security Forces. There are 19 role-specific classes with starting weapons relevant to their expertise. Also these classes are restricted only to weapons that are available to them. Snipers cannot carry machine guns for example. Supply points are used to customize the load-out. Careful decisions regarding equipment are important especially on certain game modes where spent supply points are not replenished in any way. Weight also plays a factor in your equipment. Carrying heavy weaponry will restrict you from equipping other items and slow down your movement.

Insurgency is very unforgiving towards those who are new to the FPS scene. But for the veterans or masochists this game offers nothing but breakneck combat based on skill. You can get the game for $14.99 on Steam.

Have you tried any of these games? Do you know other games like CS: GO? Let us know in the comments below.