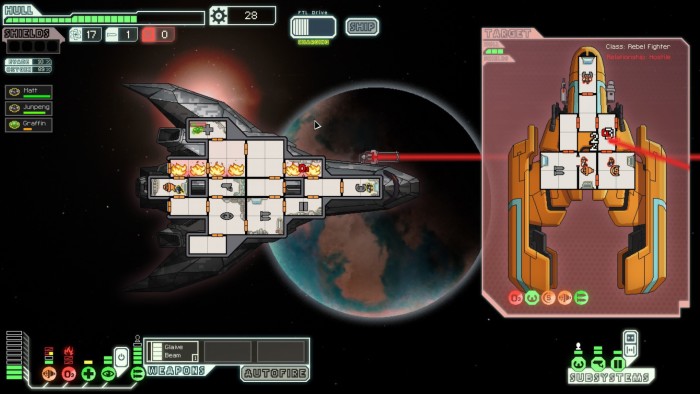 There has been a growing demand for content these last few years. Seems a game isn’t worth its salt unless it can last a hundred plus hours. You look at the game of the year contenders, The Witcher III, Fallout 4, and the thing they share in common is their length. Roguelikes take the concept of longevity up to eleven. They are literally without end. While there were games in this genre before 1980’s Rogue, it was that game that codified many of the game play elements that we have to come to love. From the permadeath to the procedurally generated “dungeons”, there is something about these kinds of games that keep you playing long into night for years.

FTL: Faster Than Light is almost unique in the genre, having less RPG elements and a focus on space exploration. I bought the game not long after it was released, way back in 2012, and loved it. You are in command of a ship rushing from one end of the galaxy to the other being pursued by a rebel army with news for the galactic federation. At the end you have to turn around and fight the flagship of the rebel fleet. You build up your crew, the weapons on your ship and upgrade its systems as you go, hoping that you landed on enough scrap to craft a vehicle powerful enough to take down the looming behemoth.

I have successfully done this on normal mode only twice in vanilla FTL, and once in the harder but much better FTL: Faster Than Light Advanced Edition. The game is Nintendo hard. It’s tense and highly enjoyable. There are loads of ships to unlock and even a difficulty beyond normal to tackle if you end up better at the game than I am. With an infinite number of ship, star system and enemy configurations there is enough game here to keep you busy for, say, four years? Now that four years has passed it might be a good idea to look into a few other stellar examples in the genre. Here’s five games in the same vein to check out. 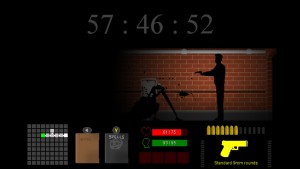 I have a thing for Lovecraft stories. The idea of looking into the infinite night sky and, at the realization of our own insignificance, being driven to madness. His work is without peer in the genre, though I’ve tried to capture it a little in my own work. The Consuming Shadow is one of the better examples of a video game with Lovecraft elements. While the fact that you can win makes it more Lovecraft-lite than the true despair of cosmic horror, it is no less thought provoking for it. The game takes many cues from FTL, the procedurally generated dungeons, the random quests and the threat of a looming cosmic power, but its game play is a little removed from it. You play as a stylized shadow of a man investigating side-scrolling dungeons, shooting monsters and collecting clues, trying to figure out both what god is invading the world and what ritual is needed to stop it.

All the while you must pay attention to the timer and your own sanity. I love a good sanity meter, and this game delivers. Borrowing a little from Eternal Darkness, the lower your sanity gets the more weird stuff you see. Monsters that aren’t there, anxiety issues etc. The best thing about having low sanity is seeing the options buttons flicker to read kill yourself. Hit the button at the wrong time and you find yourself frantically hitting the space bar so as to not put a bullet in your brain. Harrowing stuff.

The game does have its faults though. The combat is at best passable, which to me makes it terrible. The graphics too are nothing to write home about. I feel it makes up for these short comings with its wonderful mystery elements and a great soundtrack. The icing on the cake is the writing though. You’d be hard pressed to find a game so obviously well written.

4 – The Binding of Isaac: Rebirth 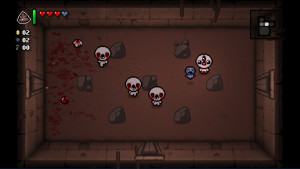 Seems like 2012 was a great year for roguelikes. The Binding of Isaac was originally released as a flash game that year. Rebirth is the 2014 “sequel”. Imagine The Legend of Zelda by way of biblical allegory and David Cronenberg and you’ll get the idea of The Binding of Isaac. You play as one of many versions of Isaac, a small boy deprived of everything nice by a zealous parent. Eventually, upon overhearing his mother’s intent to kill him under order from God he dives down to the basement of his house to escape. What follows is a meandering dungeon crawl through a many layer randomly generated Zelda 1 style dungeon. You attack with your tears, you pick up items to increase your stats, or add new abilities, and you try to fight your way to the final boss. Mom.

The game is filled with grotesque imagery bent through the lens of cute. The bosses are nauseating as much as they are plush. Really, you wouldn’t  believe how many of the creatures are available somewhere in cuddly toy form. Again, this game is hard. You’ll die a thousand times before you reach the final end, which isn’t where you think it is. All in all, in terms of longevity this is the game where you’ll get the most in terms of game play per dollar. Check it out if you’re a fan of FTL. 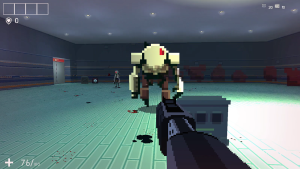 This one’s in early access, but I think it has potential to be in my personal top five of all time. Combining the frenetic action of old school run and gun first person shooters with a base building mechanic akin to Fallout Shelter all wrapped up in a low-fi cyberpunk aesthetic. You fight your way through room after room of enemies, picking up upgrades and cash so you can fix up your base and, eventually, take down the evil corporation. The graphics are a little dated looking, it’s clear the developers are going for an old-school look, all low res textures and blocky character models, and it’s on the cusp of charming, but not quite there yet. The gun play is 100% Doom, you move fast, and hit hard. The enemies fire projectiles that you can dodge, you pick up health kits and armor, pure adrenaline fueled fun.

With the game still being in early access, and $13.49, I can only really recommend it to big fans of old school shooters. The game has a lot to offer as it is, and the promised features look set to make this a stand out title of whatever year they eventually finish it in. Keep an eye out for Strafe too, another game taking cues from FPS’ of yesteryear. 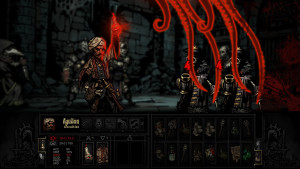 This is the most Roguelike of all the roguelikes on this list of roguelikes. A traditionally dungeon crawler with a focus on the horrors that real dungeon crawling would entail. You have to pay attention to the mental state of your party of adventurers as you explore, with party members suffering from things like anxiety and PTSD. Gameplay is a throwback to the old turn based role playing games, like DnD. In the beginning you find yourself inheriting an estate from a recently deceased relative. The relative in question had been seeking his fortune by excavating the estate looking for treasure, what he found was a portal to a dark dimension, filled with horrors that leaked out into the catacombs under the mansion. He kills himself rather than dealing with his mistake and so it is up to the player to recruit bands of adventurers to go down into the dungeons and clear out the beasts.

Easy said that. The game shares FTL’s difficulty and procedurally generated content, but the core game play is more akin to a Final Fantasy game. The art work is astounding though, and the sense of oppression is palpable. A lot of time and attention went into every aspect of this game, and if you can get past its crushing difficulty, and learn to love the death, you’re in for a damn good time.

1 – Out There Omega Edition 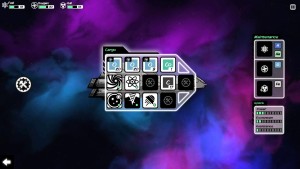 Space is vast. Seriously, it is mind-bogglingly huge. To be lost in space would be a terrible thing. And yet somehow Out There manages to be so serene about the whole thing. The game was originally released on mobile platforms back in 2014, and it’s now available on PC as well. It’s like FTL’s pacifistic cousin. You don’t have guns, your best defense is to hide, but conflict with others comes up seldom. Instead it is a struggle to make your way through this giant galaxy, mining planets for supplies and trying to make it to the goal. You outfit your ship with new tech, keep the fuel topped up and your hull integrity as high as you can and just jump from system to system. It sound easy, but it is anything but.

It is a solid resource management game elevated by an emphasis on good writing. The prose is plentiful, and really add to the sense of isolation felt by the protagonist. The graphics for the mobile versions are pretty to look at, and the PC version is more so. I’ve lost a fair few hours to this game, rolling the dice on each jump hoping against hope that the next system will have the oxygen I need to not suffocate. Even when the inevitable happens I feel relaxed by playing. The game is ostensibly a roguelike. Its lack of combat makes it something a little different from the standard fare. But if you’re playing FTL for its setting then I highly recommend picking this gem up.