The Clean Bottle Now in 2018 – After Shark Tank Update 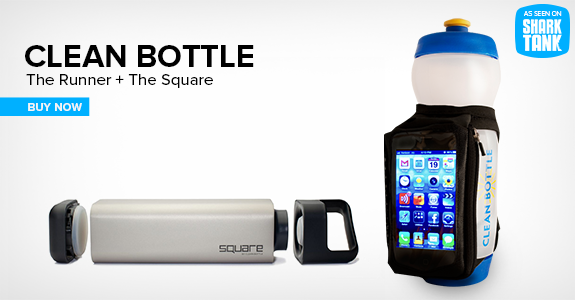 The Clean Bottle Before Shark Tank

David Mayer found his own path to success when he decided to reinvent the reusable water bottle. Unlike traditional water bottles, this new Clean Bottle has detachable ends that makes it considerably easier to clean. Sometimes if you are unable to properly clean your water bottles, that can sometimes lead to the bottle acquiring an unpleasant odor and it’s just generally a bad idea to drink out of something that hasn’t been properly rinsed out. So Mayer found a solution to this problem and managed to turn it into a pretty big success.

He took his innovated new water bottle to the Tour de France. While there, he promoted Clean Bottle by using a bottle-mascot, who really helped to send sales soaring through the roof. After his appearance at Tour de France, Clean Bottle made around $750k in sales. However, Mayer wants more for the business and wants to take it to an even higher level. He wants to find an investor who can launch the Clean Bottle brand into the marketing stratosphere. And what better place to look for a professional investor than ABC’s Shark Tank? Mayer takes his sales pitch to the tank, hoping that at least one of the Sharks will be eager to jump on this opportunity to make a lot more money off of his already successful business.

The Clean Bottle on Shark Tank

Mayer enters the Shark Tank seeking a $60k investment in exchange for a 5% stake in Clean Bottle. Then he begins to explain where the idea for this product came from. Like everyone else these days, Mayer uses his own water bottles to avoid spending ridiculous amounts of money on pre-bottled water and to help save the environment from excess plastic build up in oceans and landfills. However, your conventional water bottle is nearly impossible to clean because it’s difficult to get down to the very bottom of the bottle, and no one wants to drink from a moldy, odorous cup.  The Clean Bottle was created to solve that problem. Now you can twist off not only the top of the bottle, but the bottom as well. This makes cleaning it out incredibly easy.

About a year ago he launched the business and, as a result of not having a lot of money to invest into advertising, he went to Tour de France to get the Clean Bottle name out there. Mayer even has a video to show the Sharks of the event. The water bottle mascot is shown running alongside the cyclists throughout the race, and all of the Sharks are impressed by this advertising tactic.

While Mayer hands out samples of the bottles to the Sharks, Kevin O’Leary asks if he has seen any sales during his year of being operational. Since attending Tour de France, Clean Bottle has made $750k in sales, which translates to about 150,000 units being sold. Robert Herjavec is completely in awe of the product for its simplicity, and can’t seem to fathom why all water bottles weren’t made this way in the first place.

Daymond John redirects everyone’s attention to the Clean Bottle mascot who is standing beside Mayer. Then, to everyone’s surprise, 2 time NBA champion, Bill Walton takes off the top of his mascot costume. All of the Sharks are in absolute shock to see him. Mayer met Walton at a basketball game and simply went up to talk to him. Now Walton is just a dedicated fan of the product who wanted to accompany Mayer to show his support and express his belief in Clean Bottle.

After the initial excitement settles down, Cuban gets back to the numbers and asks what kind of money Mayer made off of the $750k made in sales. There was $118k made in profits, and now Cuban wants to know why Mayer doesn’t just invest that back into the company instead of asking them for a $60k investment.  Mayer explains that they are going to need quite a bit of money to start working on a stainless steel model of the Clean Bottle, but at the same time, he has a family that he needs to provide for. That is why he needs the help of one of the Sharks, so he doesn’t have to invest all of the profits made back into the company.

As much sense as that makes, the Sharks don’t want to be suckered into paying $60k for a small 5% of the business. Mayer states that he is greedy just like the rest of them and doesn’t want to have to give away more of the company than is necessary. However, he is willing to negotiate because he does want a knowledgeable investor to be a part of his brand.

The first Shark to make an offer is John. He has enjoyed Mayer’s presentation and can’t wait to be a partner

with him, but he wants more than just 5%. So, what he proposes is that he gets 25% of Clean Bottle in exchange for the $60k. This investment deal doesn’t sit right with him because he spent a lot of time learning about valuation, but John is saying that 5% isn’t a big enough stake to make him want to put his time and money into the business.

Before making a decision on John’s offer, he asks the Sharks if anyone else has something to put on the table. O’Leary cuts quickly to the chase and says he will give $100k for no equity, but instead he gets $.50 off of every bottle sold. Mayer states that even though he appreciates the offer, he knows that O’Leary would never advise someone to take that deal when they were just starting out their business. O’Leary counters by saying all Mayer really needs right now is the capitol to grow the Clean Bottle inventory.

Barbara Corcoran speaks up for the first time, stating that she finds it offensive that he is only offering up 5% of Clean Bottle. Mayer counters this by begging the question “would you have taken 5% of Facebook?”. She has nothing to say in response to this, but Herjavec applauds him for his valid point. Herjavec also seems to be the only person who doesn’t mind the percentage that Mayer is willing to give away. So he decides to make an offer. He is willing to give Mayer the $60k, but he wants to bump the percentage up to 10%.

So far, there are three offers on the table and the next to put a deal up is Mark Cuban. He will give Mayer $60k in exchange for 8% of the business because he sees the potential in this brand and thinks that it will end up being worth a lot more than it is right now. Not wanting to miss is opportunity to invest in this brand, Herjavec decides to change is deal to match what Mayer had originally asked for. 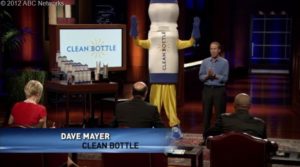 Both John and Corcoran decide to make it clear that they are out and no longer willing to make an investment, mostly because they can’t beat the deals that Cuban and Herjavec have on the table. O’Leary’s offer still stands, but it seems unlikely that Mayer will accept it. After taking a moment to think, Mayer turns his attention to Cuban to give him a counter offer of 6% instead of 8%. This new deal offends Herjavec because he was the only one from the start who agreed with Mayer’s valuation of the brand and he was willing to give him the exact deal he was looking to make. Mayer attempts to explain why he wanted to make a deal with Cuban, but Herjavec tells him “not to waste his breath” and retracts his deal.

Mayer still wants Cuban to come down by 2%, but he isn’t willing to budge on his offer. After that, Mayer steps out of the Tank to call his father, who advises him to not be afraid to walk away from the deal because they both know that Clean Bottle is going to be worth a lot more in the future. One he reenters the Tank, he says he would be willing to give up 7% of the company. All of the other Sharks are shocked by Mayer’s greed and willingness to haggle over small percentages, but Cuban decides to hold steady in his offer because he knows that he brings a lot to the table since he is the owner of the Mavericks.

After taking another brief moment to weigh his options, Mayer ultimately ends up deciding to give away 8% of Clean Bottle to go in on a partnership with Cuban.

After appearing on Shark Tank, Clean Bottle exploded into success, just like David predicted it would. Having Mark Cuban on his side definitely helped a lot, considering the connections he has in the sports world. Since appearing on the show, Clean Bottle now offers bottles in their original plastic, stainless steal, and they come in a variety of different shapes and colors. There are also various accessories to go along with the bottles such as filters and fruit infusers that have only projected sales even further.

You can find all products and information about Clean Bottle on their website, https://www.cleanbottle.com/. They guarantee that this bottle will last you a lifetime, and many product consumers seem to agree. There is no denying that both David and Mark ended up making a great deal with one another on the Shark Tank.